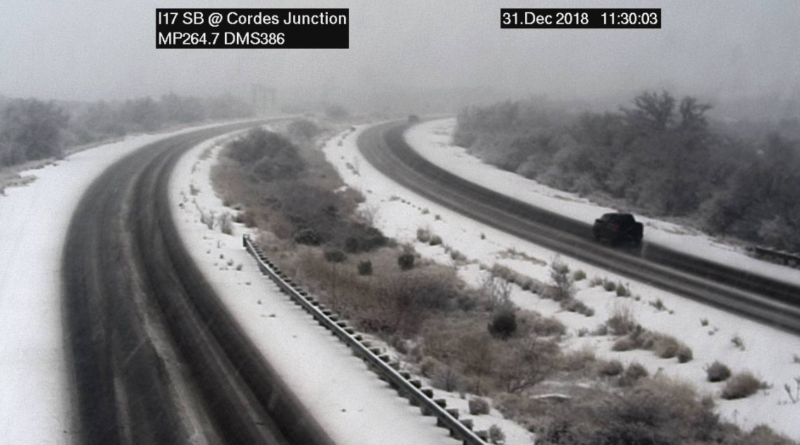 News Traffic & Travel
December 31, 2018December 31, 2018 Robert Roy Britt
For 15 years, In&Out Magazine has been the definitive source of “Everything that’s going on” in and out of the community. We thank you, our readers, as well as the businesses that support the magazine through advertising, for that opportunity. But with little going on, and many businesses suspending or canceling their ads during the Covid-19 crisis, we are suspending publication of the magazine and web sites for the month of May.

UPDATED 2:55 p.m.. — A beautiful sunrise greeted early risers in North Phoenix on the last day of 2018, but the painted clouds only portended rain that began falling mid-morning. That precipitation fell as snow in the mountains and was expected to dump up to 8 inches in the Flagstaff area by this evening. In North Phoenix, the new year will start out near or below freezing.

Snow was reported this morning in Black Canyon City and Wickenburg (at 2,400 feet), according to the National Weather Service. I-17 northbound had been closed late in the morning, north of SR 69, due to a crash, but is open now, ADOT reported around noon. However, things were getting slippery out there.”I-17 is extremely slow in both directions between New River and Flagstaff due to the storm,” ADOT said early this afternoon. [Story continues below]

I-17 NB going into Verde Valley is very slick and drivers are having difficulty stopping, according to this video from ADOT's Mark Trennepohl, the statewide road weather manager. #aztraffic pic.twitter.com/Rxs7jkMawE

Highway 169 (which connects I-17 to SR69 near Dewey-Humboldt) was blocked due to weather and multiple collisions, according to the Yavapai County Sheriff’s Office, and “collisions abound throughout Prescott and vicinity.” Local and state officials advise delaying travel into the mountains until the storm passes, if possible. (Check out our “heading north in winter” safety tips, plus a downloadable map of places to play in the snow near Flagstaff.)

The Arizona Snowbowl, north of Flagstaff, had 8 inches of new snow already by Noon, the NWS said.

Rainfall totals as of 2:55 p.m. amounted to about 1/10 of an inch across most gauges in North Phoenix.

Most of the rain and snow is expected to fall this afternoon into early evening. The forecast then turns clear and frigid, with lows near or below freezing in the North Valley into Thursday. The North Phoenix forecast from the NWS:

Among ADOT’s tweets about the snow’s effect on traffic:

STAY HOME IN THE SNOW

All the triangles on the map indicate either crashes, closures, or impassable conditions. Please delay travel today. #aztraffic pic.twitter.com/ZjHHGyntZc