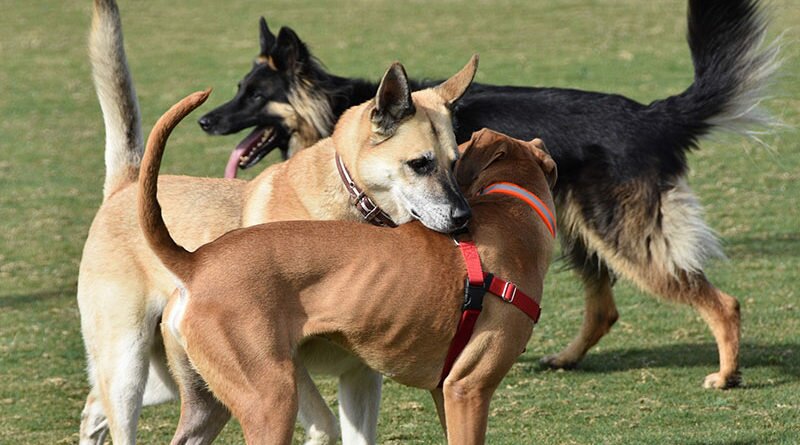 Community News Pets
February 24, 2020February 25, 2020 Robert Roy Britt
For 15 years, In&Out Magazine has been the definitive source of “Everything that’s going on” in and out of the community. We thank you, our readers, as well as the businesses that support the magazine through advertising, for that opportunity. But with little going on, and many businesses suspending or canceling their ads during the Covid-19 crisis, we are suspending publication of the magazine and web sites for the month of May.

Whidbey tugged on his leash at the exit gate of the Anthem Dog Park, the big golden retriever insisting he greet a smaller dog coming in. “He’s a very social dog,” said Diane Hampson, who held the other end of Whidbey’s leash. Whidbey also loves to run, and the fields are large—bigger than they seemed on the project plans. “It’s the running, the free play, that you just can’t get on a walk,” she said.

Hampson also said what most dog-park users know: The humans do a lot of socializing, too.

The facility, which opened in November, had 746 members by last week, with 20-30 people signing up weekly, said Kristi Northcutt, spokesperson for Anthem Community Council.

Whidbey prefers the “active” zone, where mostly larger dogs chase and dodge one another with utmost zest. The other zone is preferred by shy or passive dogs. Some pooches move between zones as their owners see fit. On the day Whidbey was there, the dogs (and the humans) were all behaving well. “There have been some scuffles between dogs, which is to be expected at any dog park or social setting,” Northcutt said. “Members are handling any issues amongst themselves.”

Northcutt reminds people to keep their dogs within voice range—the zones really are big—to prevent any aggressive behavior or destructive digging. Balls and other toys should not be shared, to help avoid the spread of disease, she said.

The grass is brown right now because it was too new to overseed so soon after the park’s opening. The Bermuda grass is expected to green up this spring. It hasn’t been decided yet whether to overseed each fall, since the Bermuda grass will be healthier if not overseeded, Northcutt said.