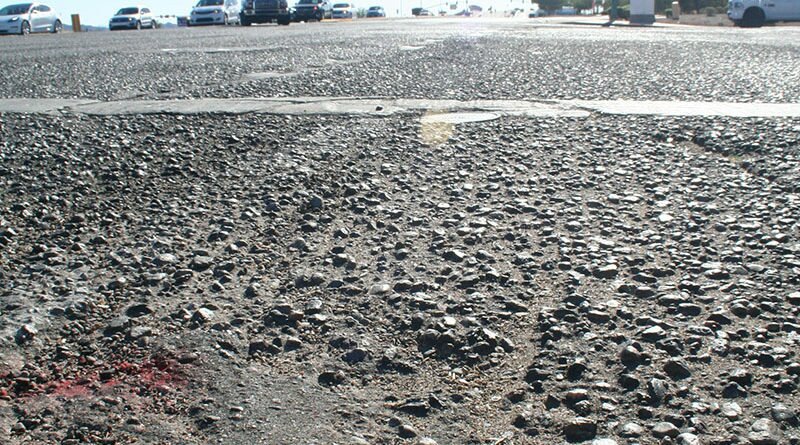 News Traffic & Travel
August 8, 2019August 9, 2019 Karen Goveia
For 15 years, In&Out Magazine has been the definitive source of “Everything that’s going on” in and out of the community. We thank you, our readers, as well as the businesses that support the magazine through advertising, for that opportunity. But with little going on, and many businesses suspending or canceling their ads during the Covid-19 crisis, we are suspending publication of the magazine and web sites for the month of May.

Drivers hoping for a smoother ride along a rough, pothole-ridden stretch of Carefree Highway between Desert Hills and I-17, will have to wait a while longer, but there is a plan.

Approximately four miles of resurfacing from I-17 to 7th Avenue, which lies within city boundaries, is slated to happen sometime between July 2020 and June 2021, said Phoenix Transportation Department spokesperson Ashley Patton. It’s part of the city’s efforts to accelerate pavement maintenance over the next five years.

The project will require removal of the top layer of asphalt to accommodate a whole new layer. “This technique is necessary when asphalt surface has reached the end of its service life or preventive treatments no longer benefit a road,” according to the city’s website.

Borrowing $200 million from the department’s Transportation 2050 street program revenues, generated from an additional 0.7 percent sales tax which went into effect Jan. 1, 2016,  [See page 21] the city aims to shave time between its roadway projects and perform maintenance on collector and local streets. Roadways once part of a five-year plan are now targeted for completion in two years. Included in the accelerated pavement maintenance program through fiscal year 2020 are some of the most deteriorated major streets, approved for maintenance by city council.

How to Help or Complain

Residents can check for planned street renovation projects, as well as track and measure progress on other projects in their area, through a street-maintenance performance dashboard updated in real time at www.phoenix.gov/streets/accelerated.

Potholes or street maintenance requests can be made online at www.phoenix.gov/atyourservice, or by calling 602-262-6441. To request certain streets be included as part of the city’s new pavement maintenance work plans for fiscal years 2021 through 2023, email comments to [email protected]

On Tuesday, Aug. 27, City of Phoenix voters will decide the fate of Proposition 105, a citizen initiative that aims to divert funding for light rail projects to other transportation needs, such as street repairs and maintenance.

Passage of Prop 105 would completely stop light rail expansions planned under Proposition 104, approved by voters in 2015. Prop 104 imposed a city sales tax at a rate of 0.7 percent for 35 years to fund transportation improvements, including the light rail, bus routes and road maintenance and repair. The city already had a 0.4 percent transportation tax in place that was set to expire in 2020. Proposition 104 increased the tax to 0.7 percent and extended it until 2051.

A citizen-led group called Building a Better Phoenix argues that with light rail ridership declining, money would be better spent solely on improving the city’s streets and sidewalks as well as other infrastructure improvements. The group worked to get a new measure, Proposition 105, on the ballot by gathering 40,000 petition signatures.

“Over 70 percent of Phoenix city streets are in substandard condition and will require billions to repair,” the group’s website states. “Halting light rail expansion will free up the money needed to fix our roads.”

“We’ve already allocated nearly $100 million this year” on street repaving and maintenance, Williams told In&Out, “and we are out of contractors and employees to do anymore paving.” Prop 105 would not speed up the Carefree Highway pavement project, due to the wastewater project underway, Williams said.

“Everything is timed,” she said, adding, “I think there’s a lot of rumors out there, and I’m encouraging everyone to vote ‘no.’ ”

Editor’s Note: The time frame of the Carefree Highway paving project was inaccurate in the initial version of this story and has been corrected.