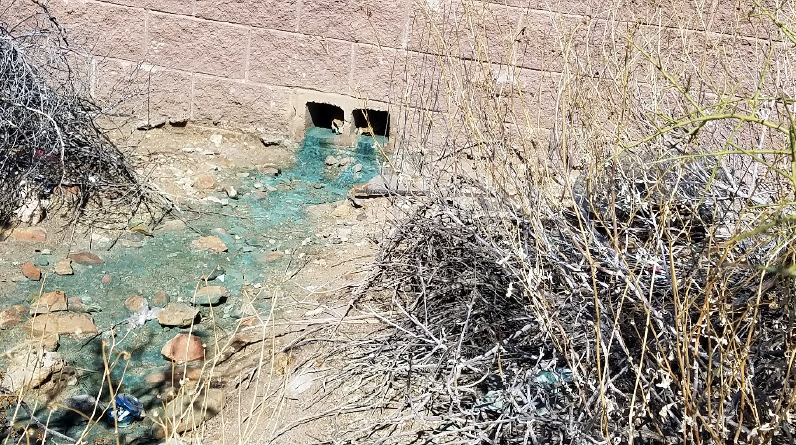 News
April 19, 2018 Robert Roy Britt
For 15 years, In&Out Magazine has been the definitive source of “Everything that’s going on” in and out of the community. We thank you, our readers, as well as the businesses that support the magazine through advertising, for that opportunity. But with little going on, and many businesses suspending or canceling their ads during the Covid-19 crisis, we are suspending publication of the magazine and web sites for the month of May.

Turf paint used to colorize grass has been leaching into a wash on the flanks of Daisy Mountain from an Anthem Golf & Country Club maintenance facility, staining part of the wash green. State inspectors also found “numerous pieces of trash” in the wash, including discarded turf-product bags, nitrile rubber gloves, and grass clippings.

In an unannounced inspection of the facility Feb. 9 based on information provided by In&Out Publications, the Arizona Department of Environmental Quality found dry residue of Endurant Turf Paint that had flowed from a set of weep holes in the block wall at the southwest corner of the paved facility and also from under an unused gate. The green stain extended about 165 feet down the wash, inspectors reported.

The facility, at 2531 West Anthem Club Drive, is within the Persimmon golf course section of the club. It is also used for vehicle maintenance and storage of chemicals and equipment. ADEQ found that workers tested equipment after filling tanks by spraying the chemicals onto the ground.

“No control measures were in place to prevent discharge of pollutants,” said ADEQ spokesperson Erin Jordan.

However, soil and water tests from the wash found no concerning levels of any hazardous chemicals, Jordan said. The facility also prepares herbicides, fungicides and other chemicals for spraying on the golf course. Endurant, maker of the turf paint, markets it as organic and “environmentally responsible” compared to using the amount of water and fertilizer needed for overseeding.

ClubCorp, owner of the facility, was required to pick up the trash, clean the paved area within the facility, and demonstrate how it will prevent further discharge. It is also now required to conduct a running inventory of hazardous waste generated.

No fines were issued. “We try not to be too heavy-handed, but instead seek cooperation,” Jordan said.

ADEQ will not require ClubCorp to remove the green stain from the wash, deciding that putting equipment into the ravine could be more damaging than letting the stain fade away with time and rain, Jordan said. The site will be re-inspected after the monsoon.

The wash drains ultimately to New River via Deadman Wash, crossing under I-17 near the Daisy Mountain Drive exit.

“Anthem Country Club is happy to confirm that the issues raised by ADEQ have been addressed,” ClubCorp Communications Manager Patty Jerde said in a statement to In&Out Publications today. “The Club is in compliance and takes the health of our members and guests and the protection of the environment seriously and we are committed to meeting all ADEQ standards.”