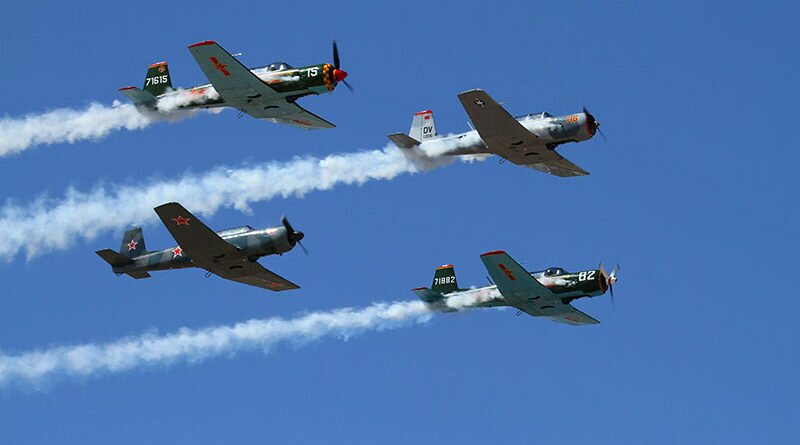 Events Featured News
November 7, 2019 Staff Writers
For 15 years, In&Out Magazine has been the definitive source of “Everything that’s going on” in and out of the community. We thank you, our readers, as well as the businesses that support the magazine through advertising, for that opportunity. But with little going on, and many businesses suspending or canceling their ads during the Covid-19 crisis, we are suspending publication of the magazine and web sites for the month of May.

Submariners are the theme for the 15th annual Daisy Mountain Veterans Parade in Anthem, with Grand Marshals attending from the community of submariners, including the Arizona Submarine Veterans Perch Base. But look to the skies at 10 a.m. sharp, when the parade kicks off with a flyover by Warbird Squadron 20 out of Deer Valley Airport.

You may have seen the Warbirds in the skies over the North Valley now and then. “We fly vintage military trainers and perform throughout the Southwest at air shows, memorial services, and funerals,” said squad leader Michael Lynch. “The formation flying over the start of the parade is a diamond formation. The flight will be in tactical spread on the second pass.”

Kids will enjoy the Mardi Gras-style candy toss, and the organization Youth for Troops will hand out American flags.

The parade begins near Boulder Creek High School at Memorial Drive, heads north, then turns right on Anthem Way and finishes at the Anthem Community Center. Parking is limited, so plan to arrive early, and anyone able to walk to the event may wish to get a little exercise. And don’t forget your lawn chairs.

Stay for the Picnic

The annual post-parade picnic, hosted by the Anthem Area Chamber of Commerce, starts at 11 a.m. at the community park softball fields.

Picnic lunches are welcome and lawn chairs and blankets are encouraged.

The world’s first combat submarine, dubbed the Turtle, looked like an oversized wine keg. It was built during the American Revolution in an unsuccessful attempt to break the British blockade of Boston Harbor. It would be more than a century before subs became serious war machines.

The U.S. Navy commissioned its first submarine, the USS Holland, in 1900. In WWII, U.S. subs accounted for more than half of all Japanese vessel losses, according to the Navy.