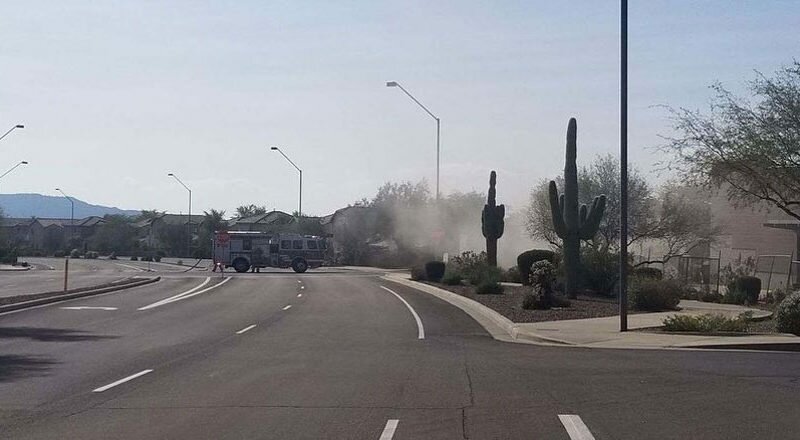 News
January 18, 2019January 18, 2019 Staff Writers
For 15 years, In&Out Magazine has been the definitive source of “Everything that’s going on” in and out of the community. We thank you, our readers, as well as the businesses that support the magazine through advertising, for that opportunity. But with little going on, and many businesses suspending or canceling their ads during the Covid-19 crisis, we are suspending publication of the magazine and web sites for the month of May.

A gas leak near in or near the Safeway Plaza today forced the closure of Gavilan Peak Parkway just south of Anthem Way and snarled traffic in the plaza as cars were forced to exit on the Anthem Way side only.

The leak began sometime around or before 12:30 p.m., and the smell of gas wafted all the way over to the Ace Hardware plaza.

“A 2-inch natural gas line had been struck by a worker digging with a backhoe,” said Brent Fenton, spokesperson for Daisy Mountain Fire & Medical. “Crews established a hot zone and evacuated the immediate area and shutdown Gavilan Peak Parkway between Anthem Way and Memorial Drive. This was done as a precaution as there is a high potential for a possible gas fed fire whenever there is a natural gas leak.”

Crews from Southwest Gas arrived and were able to shut the line off. The leak was secured at about 1:30 p.m., Daisy Mountain Fire & Medical said. It was in or near the plaza’s southwestern edge, across from the Community Park entrance, where a new building is being constructed.

About four or five commercial customers were affected, and the gas to their businesses will likely be turned back on later today, said Southwest Gas spokesperson Amy Washburn.

“Any remaining natural gas will quickly dissipate into the atmosphere,” Fenton said, “as natural gas is lighter than air.”