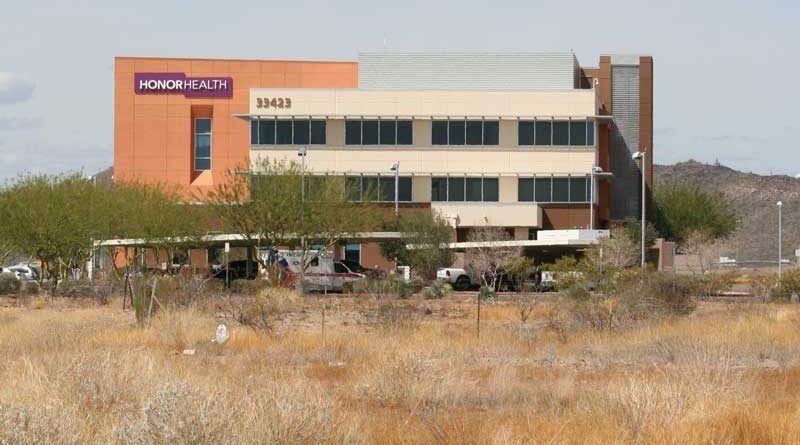 Health & Fitness News
March 28, 2018March 28, 2018 Karen Goveia
For 15 years, In&Out Magazine has been the definitive source of “Everything that’s going on” in and out of the community. We thank you, our readers, as well as the businesses that support the magazine through advertising, for that opportunity. But with little going on, and many businesses suspending or canceling their ads during the Covid-19 crisis, we are suspending publication of the magazine and web sites for the month of May.

HonorHealth’s plan for a sprawling mixed-use health and wellness campus along the east side of I-17 north of Dove Valley Road moved one step closer to final approval March 8 when the Phoenix North Gateway Board gave the thumbs up to a rezoning request—but with a height restriction aimed at preserving the character and views within the rapidly growing region.

By a 5-0 vote at its monthly meeting, the advisory board, which serves the City of Phoenix, approved the proposal with a stipulation of a 120-foot height allowance. HonorHealth was seeking a 150-foot limit.

The rezoning request will be considered by the Phoenix Planning Commission at its April 5 meeting. If approved, it will pave the way for a mix of residential and commercial uses within the 87 undeveloped acres on the site.

Plans by a previous property owner for a large auto mall at the site—bordered by Dove Valley Road to the south, I-17 to the west, and Skunk Creek wash to the east—were scrapped when the recession hit. The parcel was rezoned in 2011 to allow for the construction of HonorHealth’s Sonoran Health & Emergency Center. The company, which now owns the entire 105-acre property, first announced the health-complex plans in 2016.

The first phase of construction would include a 79-bed hospital that could be expanded to 300 beds in the future. Other preliminary site plans call for mixed uses that could include:

Phoenix North Gateway board member Michelle Ricart expressed concern about the number of multi-family/assisted-living units in the request and the impact on the nearby Deer Valley Unified schools, which are near or at capacity. Wendy Riddell, an attorney representing HonorHealth, said the housing would aim to attract mature buyers without young children. Another HonorHealth representative present said the school district is aware of the plans and has voiced no concerns.

Tramonto resident Carrie Sullivan raised concerns over accessibility to the complex and increased traffic. “You’re putting in 1,550 multi-family housing units in this area… when I feel like we don’t really have an infrastructure in place for that,” Sullivan said. “Tramonto is approximately 900 acres and in that we have 2,100 homes.”

There are currently no plans to extend North Valley Parkway to the north to connect with Carefree Highway, but Riddell said she expects HonorHealth’s impact fees paid to the city would be earmarked for that type of road work.

A potential start date has not been identified, but HonorHealth representatives said they did not expect construction to begin this year. The company also has separate plans for a new health center in Anthem.