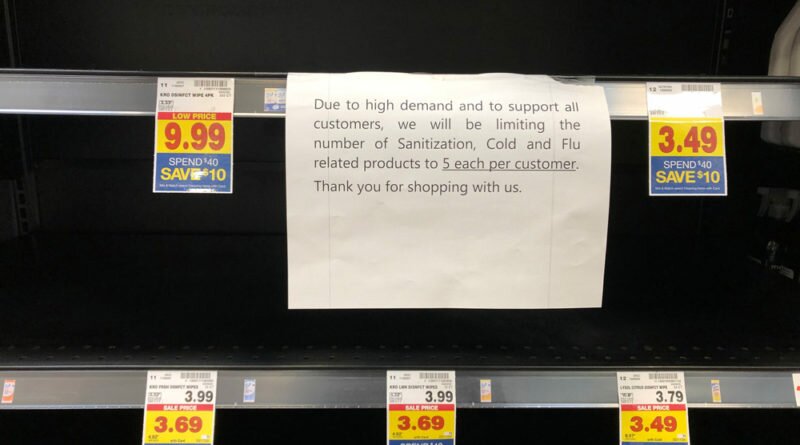 Health & Fitness News
March 12, 2020March 12, 2020 Robert Roy Britt coronavirus
For 15 years, In&Out Magazine has been the definitive source of “Everything that’s going on” in and out of the community. We thank you, our readers, as well as the businesses that support the magazine through advertising, for that opportunity. But with little going on, and many businesses suspending or canceling their ads during the Covid-19 crisis, we are suspending publication of the magazine and web sites for the month of May.

A day after Arizona Gov. Doug Ducey issued a Declaration of Emergency to battle the spread of COVID-19 and President Trump announced a ban on travel for most Europeans to the United States, local event planners maintained a “show will hopefully still go on” approach but were preparing to adjust plans if the now-global pandemic worsens in our area.

There are currently 2 confirmed cases in Arizona, 7 presumptive cases, and 24 people awaiting test results, with no deaths. Across the United States, there are at least 1,400 cases and 38 deaths.

The scene at Fry’s in Anthem today was similar to many supermarkets. A sign on empty shelves where disinfectant wipes were once stocked stated that cold and flu products would be limited to five per customer. The store was completely out of liquid hand sanitizer, toilet paper and tissues, and low on paper towels, bleach and bottled water. Means and fresh and frozen fruits and vegetables all appeared to be in good supply. The situation was similar at Fry’s off Dove Valley Road. An employee said their warehouse is completely out of hand sanitizer and offered no indication as to when the shelves could be restocked.

In the Tramonto area stores, hand sanitizer was nowhere to be found. Toilet paper and other paper products were low, but Albertson’s, CVS and Home Depot did have some toilet paper. Albertson’s also had a few packages of disinfectant wipes. Supplies of pain relievers, cough and cold medicines are also running low at several stores.

Costco was out of paper towels, toilet paper and even organic chicken.

As state and federal officials urge caution against large gatherings, it remains to be seen whether big events like Anthem Days (scheduled for March 28-29) and the Outdoor Expo at the Ben Avery Shooting Facility (scheduled for the same weekend) will go on as planned.

“The Anthem Community Council continues to aggressively increase preventative measures for health and safety at all of our facilities,” ACC said in a statement to In&Out. “At this time, all programs/classes/events will continue as planned. However, this is a rapidly-evolving situation and the risk assessment may change daily. We continue to monitor the situation and will follow guidance from public health officials at the county, state and national levels. If the status of any planned program or event (including Anthem Days) changes, we will communicate that as soon as possible.”

Meanwhile, three employees at the Anthem Community Center were wiping down dumbbells, exercise machines and other gym equipment with disinfectant wipes at around 10 a.m. today, while a typical, if perhaps slightly smaller, crowd showed up to work out. At Mountainside Fitness along Carefree Highway, fewer than half the normal crowd was getting in shape this morning. (Weather may also have played a role, as heavy rains swept through the region.)

The City of Phoenix “is reviewing possible alternative options for upcoming public meetings and gatherings,” Mayor Kate Gallego said today. “We are working with each of our city departments to determine possible telecommuting needs for city staff should the need arise. Work travel for city business has been greatly restricted for the time being. All staff who feel ill are asked to stay home.”

Deer Valley Unified School District has not yet announced any plans to cancel classes or move to online-only. “If the illness spreads to an unmanageable level, DVUSD would follow all state and local direction,” spokesperson Monica Allread told In&Out late last month. “We would close schools if that is what is needed to keep our students and staff safe.”

A letter to parents is expected from DVUSD prior to the start of spring break, March 16.

Arizona State University announced yesterday it will transition to online instruction wherever possible.

University of Arizona announced yesterday it will delay the start of classes after this week’s spring break to March 18 and move “from in-person instruction to online instruction wherever possible.”

Northern Arizona University announced today that effective Monday, March 23, which would be the return date after spring break, NAU will transition classes to online instruction for at least two weeks.

Meanwhile, the Arizona Department of Health Services (ADHS) announced the state will get $12.4 million from the U.S. Centers for Disease Control and Prevention (CDC) to support the public health response to the pandemic.

COVID-19 so far seems to kill about 10 times more of the people it infects than the flu, though scientists do not have an exact figure yet. It is not yet known how widespread the disease will become, but it is known to spread easily through close contact with infected people, from hard surfaces, and even through the air when nearby infected people cough or sneeze.

People can carry the disease and infect others for up to 14 days before symptoms appear, and some people pass the disease along without exhibiting any symptoms.

Older people and those with existing health conditions or weakened immune systems are at greatest risk of dying from the disease. The best defense for you, your family and the community against coronavirus, the flu or any germs, according to the CDC:

If you think you have coronavirus (symptom checker) call a healthcare provider and seek advice. Health officials do not want sick people rushing to doctors or hospitals and spreading the disease.

Hand sanitizers can be helpful in a pinch but are no substitute for regular handwashing. Proper handwashing with soap and water—scrubbing for 20 seconds, lifts germs from skin and washes them away.

Karen Goveia contributed to this article.