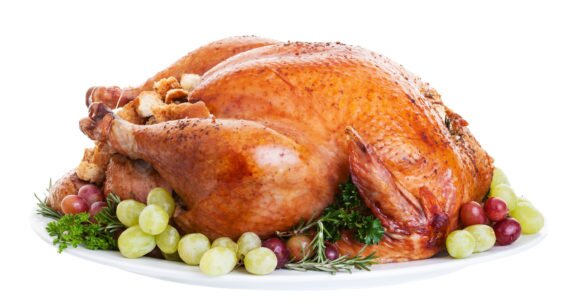 Featured Food & Drink News
November 20, 2019November 20, 2019 Staff Writers
For 15 years, In&Out Magazine has been the definitive source of “Everything that’s going on” in and out of the community. We thank you, our readers, as well as the businesses that support the magazine through advertising, for that opportunity. But with little going on, and many businesses suspending or canceling their ads during the Covid-19 crisis, we are suspending publication of the magazine and web sites for the month of May.

Americans consume about 46 million turkeys each Thanksgiving. That’s a lot of birds to produce all at once, and mass production can mean a relatively dry, flavorless turkey, often raised on antibiotics. But there are a gaggle of options. Below see Choosing a Turkey, Preparation, and Delaying the Feast. But first:

Many people have their preferred method for cooking the perfect Thanksgiving turkey — ranging from in an oven bag or not, or in the microwave, or in a vat of boiling oil. Just be sure to to cook it thoroughly. The temperature should reach 165 degrees in the innermost part of the thigh and wing, and the thickest part of the breast, as well as in the stuffing, according to the USDA. Here are some great resources you can refer to and argue about:

Experts say you should plan on about 1 pound of turkey per person.

Fresh vs. Frozen Opinions on this range like wild turkeys, and there’s no clear-cut advice. But if you want to get your bird home more than a few days advance, frozen is the best option, and some argue it’s a fine way to go.

“With today’s freezing methods, there is no significant difference in quality between a fresh turkey and a frozen one,” according to the University of Illinois Extension. Ashlee Mortimer, of Mortimer Family Farms in Dewey, agreed. Frozen turkeys are “just as delicious,” she told In&Out.

Still, some culinary experts argue that any frozen meat will tend to be drier. To compensate, frozen supermarket turkeys are often injected with a solution (typically water, salt, oil and seasoning) that can be high in sodium; To identify these birds, look for a label that says “basted” or “self-basting.”

If you buy a fresh (non-frozen) turkey, it must be refrigerated and should be cooked within two days of the sell-by date, according to the USDA and other food safety experts.

Tipsy Turkeys The most common supermarket turkey, by far, is the Broad Breasted White, bred to have oversized breasts that provide more meat for the dollar. They grow so large, however, that the birds sometimes fall over trying to walk, and can no longer procreate naturally. They are typically raised in a large shed with tens of thousands of other birds. Antibiotics are often used to control disease fostered by the buildup of manure.

Size Matters Smaller birds tend to be more tender, according to the Food Network and others who talk turkey. Male turkeys (toms) grow bigger than females (hens), but two turkeys of the same size will be similar in tenderness and flavor.

Nutritional Value Turkey is similar nutritionally to chicken. A 3-½ ounce serving of skinless breast meat (about the size of a deck of cards) has around 30 grams of protein and 4 grams of fat. Despite many studies, there’s no consensus on whether organic food has more nutritional value than non-organic.

Look at the Label

Some labels are confusing or deceiving. Here’s what they really mean:

The U.S. Department of Agriculture strongly warns consumers against trying to wash their turkey—or any raw meat—before cooking it. The USDA described it as “virtually impossible” to clean your turkey this way. In fact, sink washing increases the risk of cross-contamination; The fine spray of water bouncing off the turkey can spread germs all over your sink, hands, clothes, forearms, fixtures and nearby dishes and counters.

Instead, simply open the packaging over the sink, let the juices drain, then move the meat directly to the pan or tray it’s going to be cooked in. Discard packaging immediately.

The only way to truly sanitize your turkey is to cook until its internal temperature reaches at least 165 degrees Fahrenheit. Allow the bird to touch or drip on as few surfaces as possible before then.

Wash hands with warm water and soap for 20 seconds before and after handling.

To prevent cross-contamination from raw meat or poultry juices, wash counters and sinks with hot, soapy water. For extra protection, sanitize with a solution of 1 tablespoon of unscented, liquid chlorine bleach per gallon of water.

Thanksgiving dinner; an exercise in multitasking, scheduling, communication and stress management. All of which can be easily thrown by car trouble, a flight delay, family drama or waiting in line for a doorbuster deal. If a last-minute call disrupts your plans, don’t worry.

Delay: One to Three Hours

Parts of this article were adapted from previous In&Out Magazine articles. Research & writing by Robert Roy Britt and Sydney Marsing.