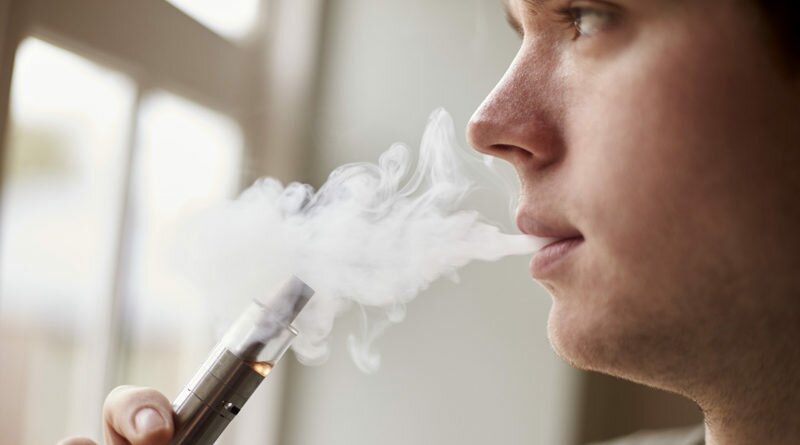 The illegal use of e-cigarettes has surged in North Phoenix and Anthem high schools, and even in middle schools—part of what the Food & Drug Administration now calls a vaping epidemic across the country with serious health risks. Deer Valley Unified School District just updated its drug policies to battle the problem and promises suspensions and a push for criminal charges and fines. And drug-sniffing dogs are on the prowl.

“We have noticed a significant increase in the use of e-cigarettes by students on our campuses this year,” DVUSD Superintendent Curtis Finch said in a letter to parents last week, announcing new drug enforcement policies.

It’s against DVUSD rules for any student, including those who are 18, to possess or use tobacco products on campus. E-cigarettes are considered tobacco products. While the problem is most prevalent in high schools, “vaping is occurring” in middle schools, too, said Scott Warner, the district’s director of school operations and athletics.

Meanwhile, students have brought vaping from the bathrooms to the classrooms, using small electronic devices teachers and parents may not even notice.

“We know anecdotally that it’s occurring in classrooms,” Warner told In&Out. “The kids are just holding it in. And there are all kinds of poisons that are supposed to be released in the vapor. These kids are guinea pigs. We don’t know what the long-term health effects are going to be.”

E-cigarettes use a battery to heat a pod of liquid (commonly called “vape juice”) that produces an aerosol (the vapor). Some devices resemble regular cigarettes. Others look like a standard pen or a portable USB drive. Larger devices with tanks are called “mods” and look different still.

The pods can be bought separately and can deliver other liquid drugs, including marijuana.

By far the most popular e-cigarette brand among youth is Juul. It looks like a USB drive and, based on a CDC report citing the manufacturer, “a single Juul pod contains as much nicotine as a pack of 20 regular cigarettes.”

“Some kids do it just to fit in, and others do it because they like the buzz,” said a 17-year-old Boulder Creek High School student we’ll call John. The boy, who asked not to be identified for this article, estimates about 40 percent of the student body vapes. Another Boulder Creek student put the figure higher.

Among U.S. students in middle and high school, vaping surpassed conventional cigarettes in 2014 as the most common tobacco product, according to the FDA. A comprehensive national survey conducted in early 2017—still somewhat early on in the vaping craze—found 27.8 percent of high school seniors reported vaping in the year prior, and 16.6 percent had vaped in the previous month. Among eighth-graders, 6.6 percent said they’d vaped in the previous month.

“I can call up anyone I know who is 18 and give him $40 for a Juul and a pack of pods, and if I can, so can any kid who is under 18,” John said. He added that while most students are aware of the consequences, some are just riskier than others. “I see kids vaping in class every now and then. Just a couple days ago, I saw a kid do it when the teacher turned their back.”

John says he and a few friends don’t vape, either for lack of desire or concern over the health risks. But he worries about others. “Some kids are extremely dependent on vapes and have become addicted,” he said.

Vaping is not just a DVUSD issue. Some students at Anthem Prep, a high-performing charter school known for its strict discipline on everything from haircuts and gum-chewing to shoe brands, are partaking, too.

Jane (not her real name) is a 18-year-old at Anthem Prep. She estimates about 5 to 10 percent of students there have their own vape device and use it often. She’s never seen anyone vaping in class. “Most people don’t vape as often at school as they do outside of school, Jane said. “It varies from person to person and often depends on how afraid they are of being caught.”

“Students who are caught ‘vaping’ at school will be suspended, and most schools are now referring possession of e-cigarettes by students to law enforcement for prosecution,” DVUSD’s Finch wrote in last week’s letter. “Fines for minors in possession of nicotine delivery systems can range from $200 to $500 depending on the jurisdiction.”

Meanwhile, teachers have become “the first line of defense” in spotting e-cigarettes and reporting to administrators, Warner said. And teachers have needed some education since the vaping craze took off about three years ago. “A lot of teachers didn’t realize what they were looking at when they saw them,” he said.

The FDA has developed anti-vaping health campaigns aimed at youth via social media. DVUSD plans to include vaping education into its health curriculum, Warner said, but to date, the focus has been on deterrence through increased detection and threat of suspensions and fines.

It may all be having an effect, along with some students simply deciding vaping isn’t for them.

“Way more people try it and decide they don’t want to do it all of the time than those who end up vaping often and getting addicted,” Jane said.

“I feel like it is kind of getting better,” said John, the Boulder Creek student. “More kids are quitting because they know the health risks, but other kids, especially younger kids, are much more susceptible to getting into it because it’s ‘trendy’ or because all their friends are doing it.”