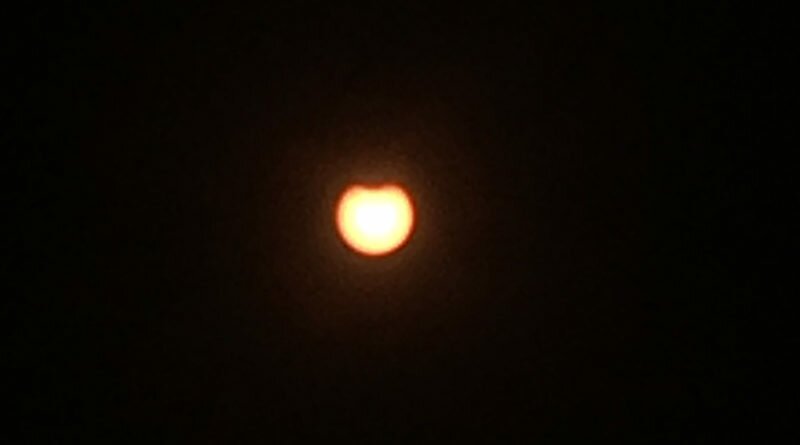 See Photos of the Eclipse

Editor’s Note: The article below provided a preview of the event. Click the above link to see images from the eclipse, including what it looked like in the path of totality, and what the moon shadow on Earth looked like from space.

If you’re still in Arizona, you won’t be seeing the total solar eclipse today from a physical location along the path of totality, a 70-mile-wide shadow that will stretch from Oregon to South Carolina. But you can catch the partial eclipse here, or watch the total eclipse online or on TV. Viewed from the Phoenix area, the moon will cover 63 percent of the sun. The sky won’t darken, animals won’t freak out, and unless you have proper viewing glasses or an indirect viewing device, you probably won’t even notice.

IMPORTANT
Do not to look directly at the sun during the partial solar eclipse. It will damage your eyes.

The partial eclipse from the greater Phoenix area began at about 9:13 a.m. as the moon took a small scallop out of the top of the sun. It will reach maximum at about  10:33 a.m. If you want to catch just a couple glimpses, those are good times. The eclipse will end at about noon.

Special eclipse glasses are the best tool for looking at the sun. They’re cheap, when you can get them, but of course it’s too late now to order any.

Number 14 welder’s glass is safe, too (but many welders use goggles and shields that are not up to this standard). If you know a welder, you might be in luck.

Sunglasses are NOT safe.

Network and cable TV stations and NASA plan to broadcast the total eclipse live. Click here for a list of options for watching it from your living room.

There will also be several live online streams of the total solar eclipse.

Never Miss a Big Event: Subscribe to the NoPho Newsletter

First, some basics: The moon orbits Earth, and Earth orbits the sun. All three objects (and most of the other planets) travel on roughly the same plane in space. Imagine a fruit bowl at the center of a table as the sun, with apples (planets) on the table going in circles around the fruit bowl, and a cherry (the moon) going around one of the apples.

A solar eclipse occurs when the moon gets directly between Earth and the sun. Light from the fruit bowl is blocked by the cherry, casting a shadow on the apple. 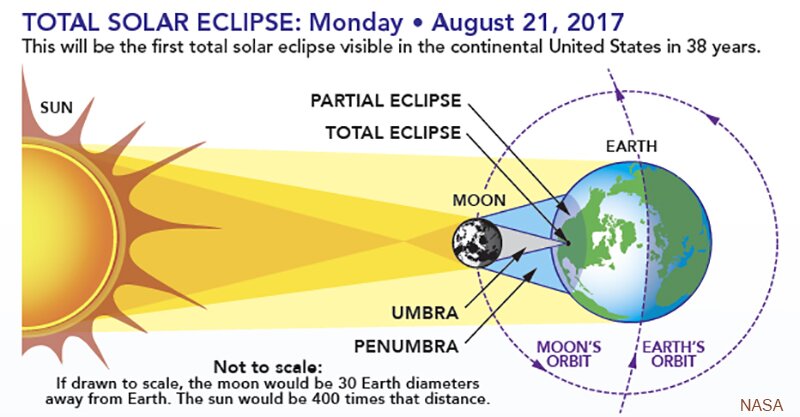 The moon orbits Earth approximately every 28 days. So why isn’t there a solar eclipse each time? Because the moon’s orbital plane around our planet is tilted slightly compared to Earth’s orbital plane around the sun. Now and then, the objects align perfectly, and a total solar eclipse can occur, but in most months, the moon just gets lost in the glare of sun at new moon.

Total solar eclipses are rare at any given spot. The last one in the contiguous United States was 1979, and the next one will be in 2024.

We live in a cosmically coincidental time, by the way. The sun and moon are almost exactly the same apparent size in the sky, from our point of view (the sun is much larger, of course, but also much farther away).

So for now, the moon just barely covers the sun — the fit is so tight that the moon’s full shadow on Earth is only a few dozen miles wide. Anyone outside that path, including Arizona residents during this eclipse, will see the moon partially covering the sun, as though taking a scallop out of it (or, in some parts of the world, they’ll see no eclipse).

Eventually there won’t be any total solar eclipses. The moon is drifting away from Earth by about 1-1/2 inches a year. In about 600 million years, it’ll be too far away to completely blot out the sun.