UPDATE 9:05 a.m. Wednesday, July 12 — The Brooklyn Complex of three lightning-caused fires that sent smoke into North Phoenix for several days is largely under control. Higher humidity and scattered showers helped crews gain the upper hand over the past two days.

“There is no longer any threat to private property near Black Canyon City,” the U.S. Forest Service said in a statement this morning. Acreage burned increased just slightly from previous updates:

Barring any surprises, this will be the last update on this event form North Phoenix News. Future updates are available from the Forest Service here.

UPDATE 9:24 p.m. Monday, July 10 — The Brooklyn Complex, as it is now called, involves three separate lightning-caused fires on which crews have gained the upper hand. The main fire, within site of the Sunset Point Rest Area on I-17, had burned 32,778 acres as of this morning’s update. The Bull Fire, separate and south of the main blaze, has consumed 3,500 acres. The West Cedar fire, far to the east, 679 acres.

The total acreage, 36,957, is up slightly from the 35,883-acre estimate 24 hours ago. Some 150 personnel are on the scene. Firefighters had “a pretty good day yesterday,” said U.S. Forest Service operations section chief Rocky Gilbert.

Monday, likewise, went well: “Overall there was minimal fire activity on all three fires,” the Forest Service said in an update Monday evening. The number of acres burned changed only slightly.

Containment as of Monday night:

On Sunday, the main fire burned down cliffs into the Agua Fria drainage in the southwest region of the fire, Gilbert said. There was “slopover” in the northeast quadrant, and “things are looking good all along the southeast portion of the fire.”

The Bull Fire is just north of Forest Service 41 Road near Table Mesa, Gilbert said. “It was kind of active” yesterday, he said.

At times, crews dealt with “30 mph sustained winds in all directions,” as thunderstorms rolled through the fire region, the Forest Service said in its latest update.

No structures are threatened, Gilbert said, and no evacuations are in place. However, the update says “150 structures [are] potentially at risk northeast of Black Canyon City,” along with “significant threat to cultural, riparian, and sensitive wildlife species on the Agua Fria National Monument.”

Some APS transmissions lines were potentially threatened today, according to the morning update, and there’s possibility of more smoke in the North Phoenix area if thunderstorms generate winds blowing southward, as they’ve done the past three afternoons.

The forecast for Black Canyon City calls for a 20 percent chance of thunderstorms in the afternoon and 30 percent tonight.

One strong thunderstorm ripped through the Table Mesa area around 6 p.m.

The fires are not affecting I-17 traffic (a separate brush fire did close the interstate Sunday night). Bloody Basin Road remains closed at I-17 eastbound, and Badger Springs Road is closed at I-17.

UPDATE 6:33 p.m. Sunday, July 9 — Some structures are threatened but not in immediate danger from the large, complex and shifty Brooklyn Fire in a mountainous region of the Tonto National Forest north of Phoenix. Meanwhile, fire officials say smoke could drift into the North Phoenix area Sunday afternoon and evening for the third straight day.

The fire burned southward amid erratic winds Saturday afternoon and into the night, as crews were forced to back off. Lightning caused the fire, the Forest Service determined last night.

Yet even as two other lightning-spawned fires started near the main blaze, increased humidity helped slow the Brooklyn Fire’s progress Saturday night, said Frank Mosbacher, a spokesperson for the Bureau of Land Management. The main fire likely grew in size overnight, but not significantly, Mosbacher said in a telephone interview this morning.

“The fire did not move very much last night, which is a good thing,” he said.

Crews Sunday focused on an area at the northwest portion of the fire where it had jumped across Bloody Basin Road. “The rate of spread was moderate today,” Mosbacher said at about 6:20 p.m. Sunday. An update on acres burned was not yet available.

The acreage burned has not yet been updated today. The fire was 5 percent contained this morning, with 100 personnel on the scene.

The Brooklyn Fire is now part of a “complex” of lightning-sparked blazes that includes two others: the Bull Fire southeast of the Brooklyn Fire and the Cedar Fire to the east. These two are in remote areas of the Tonto National Forest “with no structures threatened” by them, the Forest Service said.

The fire’s official name now is the “Brooklyn Complex.”

Separately, another brush fire, this one said to be small, started near I-17, closing the freeway in both direction for a time. Mosbacher said the prospects for gaining control of it were good.

Some 50 to 60 structures a few miles northeast of Black Canyon City were considered threatened by the Brooklyn Fire. The structures are in or near the Cross Y Ranch, Mosbacher said. He said there is no immediate or major risk to the structures right now, and no evacuations in place.

Today’s developments will depend in part on the weather. Saturday, erratic storm winds forced ground fire crews to back off, and air operations were halted as winds were “pushing the fire in multiple directions, predominantly south,” the Forest Service said.

“Similar weather conditions are expected today,” the Forest Service said in its Sunday morning update. “Smoke will continue to affect communities to the south of the fire such as Anthem, New River, Carefree, Cave Creek, and North Phoenix.”

BLM officials caution residents in areas with heavy smoke to stay indoors. As a guide, if visibility is reduced to 5 miles or less, the smoke is considered unhealthy for children, seniors and anyone with heart or lung disease (see health/safety chart).

I-17 remains open. Badger Springs Road is closed. Bloody Basin Road is closed from I-17 eastward and the entire fire area is closed to recreational activities, Mosbacher said.

The Brooklyn Fire originated roughly 16 miles north of New River and about 6-7 miles east of the I-17 Sunset Point Rest Area. For the detail-oriented: It started 1 mile southwest of Brooklyn Peak and 6 miles northeast of Black Canyon City.

The following portion of this article was last updated Saturday night:

In a reprise of Friday evening’s smokeout, outflow from mountain thunderstorms Saturday afternoon pushed smoke from the fire into Anthem, New River and parts of North Phoenix.

While record heat will abate Sunday, Mother Nature will not make it easy on fire crews. The National Weather Service predicts a 20 to 30 percent chance of thunderstorms Sunday, especially in the afternoon and evening hours. Monsoon storms sometimes, however, bring wind and no rain.

“The main concern [for firefighters] is going to be the gusty winds,” Matthew Hirsch, a meteorologist in the NWS Phoenix office, said in a phone interview Saturday afternoon.

“We’re hoping the humidity will help to moderate fire activity overnight,” Garcia said. But firefighters remained concerned about additional storms that could affect the wildfire’s intensity and direction into the night. While the blaze had migrated northwest most of the day, storm winds pushed the fire southward, she said.

The state forestry department tweeted at about 5:30 p.m., however, that the fire remains north of “the heart of Black Canyon City” and there are “no threats to New River” or Cordes Junction.

At about 9:30 p.m., BLM chimed in with a reassuring tweet: The fire “remains N of Black Canyon City, no evacuations.”

What’s Causing All These Wildfires?

“Incident managers are working with county law enforcement to continually evaluate the fire situation in areas where homes and property have the potential to be directly affected,” the forestry officials added just before 7 p.m. “There are NO evacuations in place at this time.”

As winds die down tonight and an inversion layer settles in, it’s likely more smoke will be pushed into in North Phoenix, Garcia said in a telephone interview.

“The fire was pushed all night by winds,” U.S. Forest Service fire officials said in a statement at about 2 p.m. Saturday. “It is burning in grass and brush in a westerly direction into the Agua Fria National Monument and north toward the Prescott National Forest. Earlier today, the fire crossed highway 269, Bloody Basin Road.”

No structures were threatened by mid-afternoon. But the fire presents a “significant threat to cultural, riparian, and sensitive wildlife species on the Agua Fria National Monument,” the Forest Service said.

“Agua Fria contains one of the most significant systems of prehistoric sites in the American Southwest, including Pueblo La Plata, a major settlement of stone masonry pueblos,” according to the monument’s website.

Smoke from the fire Friday evening blew south into New River, Anthem and North Phoenix clear down to Happy Valley Road. Overnight a red glow (photo below) was visible from New River and Anthem, startling some residents who feared the fire might be closer than it was.

Meanwhile, fire officials are concerned about the possibility of more fires that could be triggered by lightning.

One Fire, Not Two

Reports Saturday morning from multiple agencies that there were two fires in the area turned out to not be true, Anne Thomas, a spokesperson with the Tonto National Forest, told North Phoenix News.. “There is just one fire,” she said mid-morning.

Ample winter rains left the region flush with vegetation that’s now bone dry. It’s not uncommon for a fire to grow that quickly in such conditions, Thomas said. But, then again, “there’s nothing common” about wildfires, she said.

[STORY CONTINUES BELOW: THE RED GLOW]

This video of the fire was made at 11:25 a.m. Saturday, and an hour later the fire had spread notably northward:

A red glow in the sky was visible from Anthem Friday night into the predawn Saturday, and some New River residents expressed concern during the overnight hours as the red glow was prominent from there.

On Saturday morning, as winds shifted, smoke was drifting into Prescott Valley and was visible in Prescott, officials with the Prescott National Forest said.

There were reports of lightning in the region Friday afternoon, as some of the first storms of this year’s monsoon flared up. By nightfall, the storms deflated over the mountains, pushing winds down into the Valley Friday evening, carrying the smoke into the area.

Already this has been one of the most active fire seasons in two decades along the I-17 corridor from North Phoenix up to the Sunset Point area. Most of the fires have been human-caused, officials say.

Correction: An earlier version of this story said Anne Thomas was a BLM spokesperson. She is with the Tonto National Forest.

This article was initially published July 7 at 8:42 p.m. 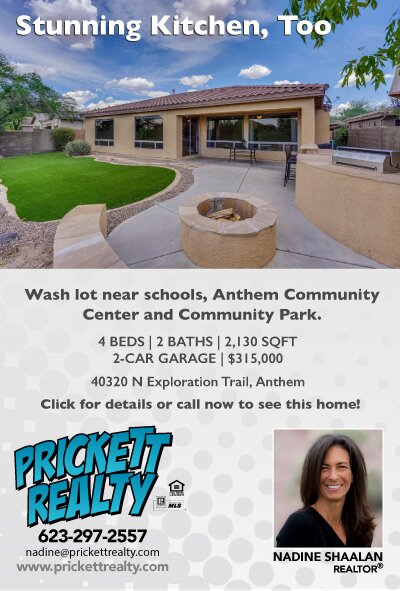