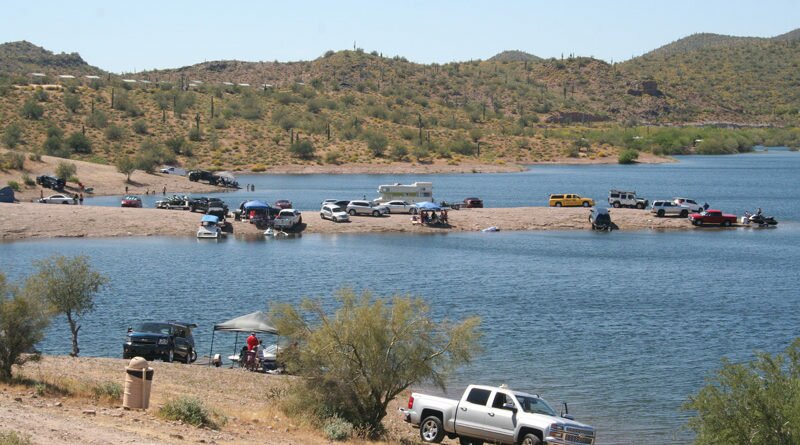 Lifestyle News
April 6, 2017April 8, 2017 Robert Roy Britt
For 15 years, In&Out Magazine has been the definitive source of “Everything that’s going on” in and out of the community. We thank you, our readers, as well as the businesses that support the magazine through advertising, for that opportunity. But with little going on, and many businesses suspending or canceling their ads during the Covid-19 crisis, we are suspending publication of the magazine and web sites for the month of May.

Heavy precipitation has left Lake Pleasant brimming for the second spring in a row, putting a damper on campers and creating competition for shoreline space. “Water levels at Lake Pleasant Regional Park are unusually high this year, and high water levels impact the amount of shoreline we have available for day use and camping opportunities,” said R.J. Cardin, Maricopa County parks and recreation director. The high water level is expected to last into July.

High water last year caused park attendance in May to drop by almost a third compared to years prior. A similar scenario is expected this year, said park spokesperson Dawna Taylor.

The lake typically fills in winter and spring, with runoff from the Agua Fria River plus Colorado River water transported by the Central Arizona Project. CAP then draws the lake down the rest of the year to provide water to Anthem, Phoenix, and farms and homes throughout the Valley and down to Tucson.

Water releases could start as early as May, said CAP spokesperson Tressa Jumps. “This year, Lake Pleasant may drop anywhere from 12 to 15 feet per month from June through August,” Jumps told In&Out.

Developed campsites—there are about 150—are open, and reservations are recommended. The lack of shore area limits “primitive camping,” particularly popular at the northern end of the lake, which is “just packed,” Taylor said. With available primitive campsites being so close to vegetation, expect campfire bans, too.

On the plus side: The walk to the lake’s two marinas is short. And a full lake is good news, sort of, for water managers. “Even though Arizona and the Rocky Mountains saw some great hydrology this winter, we are still in a drought and must manage our water carefully,” Jumps said.

When sites reach capacity, park officials plan to put an alert on the park’s website. Shoreline updates can be found here or by calling 928-501-1710.

Editor’s Note: This article, originally published March 29, was updated April 6 to include additional information about when the lake level is likely to drop.