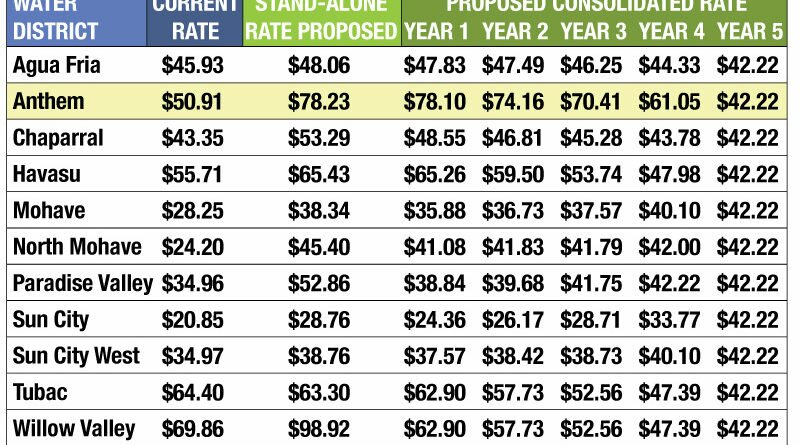 Community News
August 6, 2018August 6, 2018 Robert Roy Britt anthem, epcor
For 15 years, In&Out Magazine has been the definitive source of “Everything that’s going on” in and out of the community. We thank you, our readers, as well as the businesses that support the magazine through advertising, for that opportunity. But with little going on, and many businesses suspending or canceling their ads during the Covid-19 crisis, we are suspending publication of the magazine and web sites for the month of May.

If Sun City residents have their way, Anthem east-siders will see water rates increase dramatically next year and stay high into perpetuity. And so far, Sun City is winning the battle of resident input. Anthem Community Council wants that to change.

The Arizona Corporation Commission is in the midst of a lengthy process weighing two options for EPCOR’s water rate structure.

Either way, EPCOR is seeking more funds overall to address what it calls necessary maintenance, and to make capital investments to sustain long-term operations.

Sun City residents are lobbying hard for stand-alone approach, which would keep their rates significantly lower than under consolidation.

Anthem Community Council is emphatically in favor of consolidation, which in the long run would mean a monthly rate of $42.22 for a typical Anthem customer vs. $78.23 under the stand-alone scenario (see chart below). The stand-alone rate would represent a 127 percent increase for Anthem customers since 2008, vs. a 22 percent increase in the Consumer Price Index during that time, according to an analysis by council staff.

Sun City has submitted to the Corporation Commission 7,700 signatures on a petition opposing consolidation, Willis said at the July 25 monthly board meeting. Anthem has submitted fewer than 500 letters and emails, as of last count, according to council staff. EPCOR serves 8,732 ratepayers in Anthem.

“We really need your help, everybody’s help,” Willis said, adding that consolidation is “our only hope for reasonable water rates over the next five to 10 years or longer.”

Input is crucial over the next few weeks (the sooner the better), Willis said. The case is likely to be decided in September or October. “I’m trying to scare you into some action,” he told the handful of attendees at the monthly council meeting. “We’ve got to totally inundate the commissioners.” 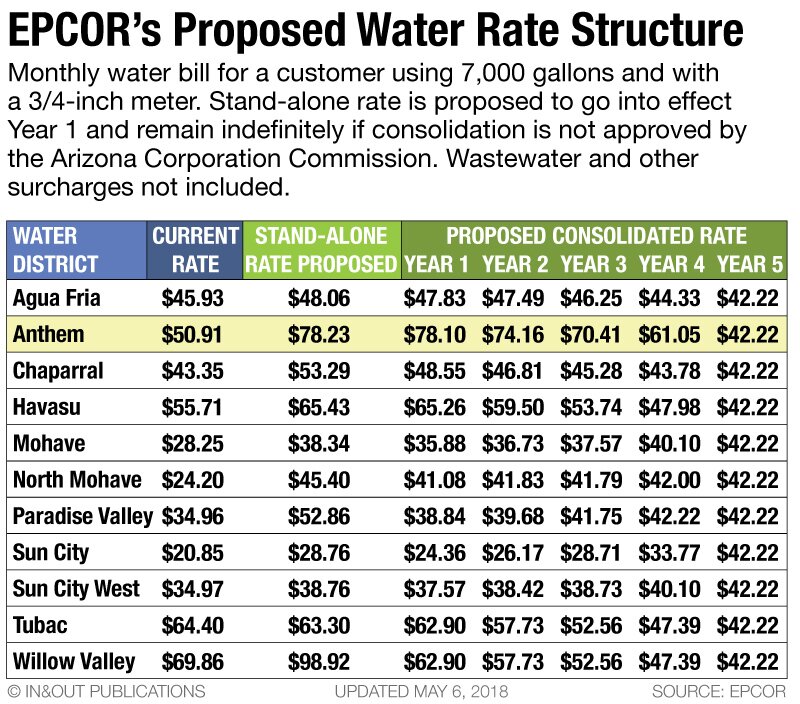 Note that the rates discussed in this article are basic water rates only, and do not include wastewater rates or other fees that make up an EPCOR bill, and the rates cited are examples for typical customers only.

Anthem Community Council recommends residents be  “for” consolidation. “In the space provided, please share with the Commission how you feel about your water rates, and that Anthem shouldn’t have to continue to shoulder these higher rates,” the council said in a statement.

Editor’s Note: The following detail was provided in a previous North Phoenix News article about the rate case and is republished here.

Anthem water rates have not changed in more than nine years, EPCOR says, while the utility’s operational costs have risen and various systems need new capital investment. Consolidation would make the utility more efficient and spread the growing cost burden more equally among large and small districts, it says.

In all, EPCOR is looking to generate an additional $14 million per year over the next five years — for a total of $70 million — to deal with increased operating costs and capital expenditures.