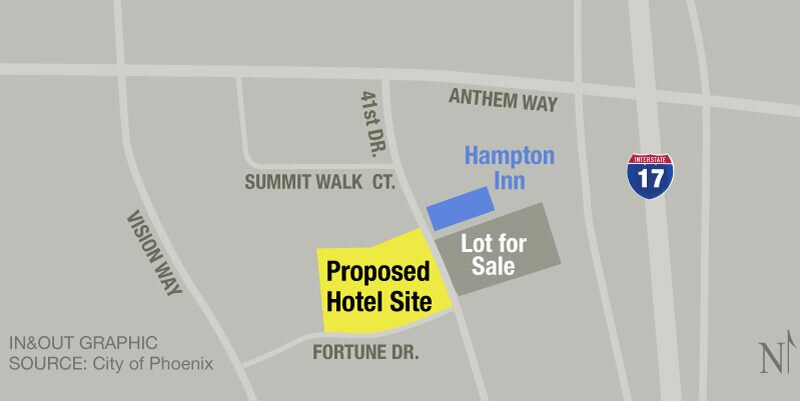 News
February 19, 2019 Karen Goveia anthem
For 15 years, In&Out Magazine has been the definitive source of “Everything that’s going on” in and out of the community. We thank you, our readers, as well as the businesses that support the magazine through advertising, for that opportunity. But with little going on, and many businesses suspending or canceling their ads during the Covid-19 crisis, we are suspending publication of the magazine and web sites for the month of May.

A property owner aims to build a Holiday Inn Express on a vacant Anthem plot that doesn’t allow a hotel.

Representatives for the property owner, Tim Rutjes, are seeking a height waiver from the City of Phoenix to allow a 40-foot tall, three-story structure on 3 acres near 41st Drive and Fortune Drive in Anthem Commerce Park. The land is zoned commercial by Phoenix, which allows for a hotel limited to two stories and 30-feet tall. The Rio Vista Planning Committee, an advisory group to the city, approved the height waiver Feb. 12, so the proposal can now move to the city’s Planning Commission for consideration in March.

However, Anthem’s governing documents don’t allow for a hotel at that location.

Anthem’s Supplemental Declaration of Codes, Covenants and Restrictions state that with the exception of two lots—the site of the existing three-story Hampton Inn and a lot immediately to the south owned by the same company—“no portion of any lot may be utilized for the operation of a hotel or motel.”

“The land-use proposal would require amendments to both the Supplemental Declaration of CC&Rs for the Commerce Park and the lot-specific Tract Declarations to allow a hotel at this site,” Anthem Community Executive Officer, Neal Shearer, told In&Out. “To date, no such amendments have been approved by either the Declarant (Pulte) or the Anthem Community Council.”

At the meeting, neighbors expressed concern about traffic issues along 41st Drive and whether another hotel is needed.

Rio Vista committee board member Steve Scharboneau said any action taken by Phoenix would be separate from whatever Anthem officials might decide, adding that if there’s an issue with a hotel in that location, “it has to be taken up with Anthem.”