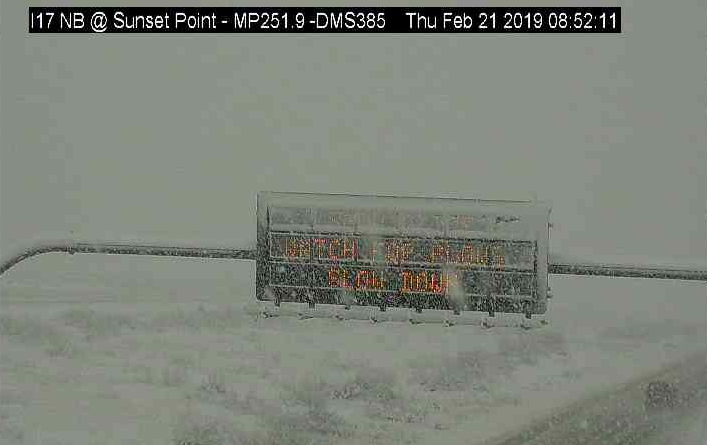 From dime-sized hail in the North Valley to an all-time record day of snow in Flagstaff, this was a storm to tell the grandkids about. By 7 p.m., from 1/2 inch to nearly  1 inch of rain had fallen in gauges from New River through Anthem, Tramonto and Sonoran Foothills down to Norterra. In roughly reverse-chronological order, here’s what Mother Nature delivered:

Flagstaff Airport is up to 31.6" of snow for the day as of 5pm! This eclipses the previous all-time daily record for Flagstaff of 31.0" (set in 1915)! We still have 7 more hrs to add to this record. The storm total including before midnight is 33.1" for this event so far. #azwx

Here is footage of an accident our crews responded to, caught via freeway camera at north bound I-17 at Daisy Mountain Drive. Thankfully no one was seriously injured. pic.twitter.com/UBTnETKsVV

AFTERNOON UPDATE: “Northbound Interstate 17 is closed at State Route 179, about 12 miles north of Camp Verde, due to a winter storm that has created unsafe driving conditions,” ADOT announced at around 3 p.m. “There is no estimated time to reopen the northbound lanes. While the southbound lanes remains open, ADOT is strongly encouraging drivers not to travel during the winter storm.” (See more road-closure info at the bottom of this article.)

EARLIER: As rain and hail pounded the Valley of the Supposed Sun this morning, snow fell in Cave Creek and Carefree and brought travel in the high country to a standstill in some spots. Snow was falling at a rate of 3-4 inches per hour along I-17 near Munds Park, the National Weather Service said at about 9 a.m., and more than a foot had fallen in the Flagstaff area already earlier in the morning. ADOT advised travelers to avoid heading up I-17. “Chains or 4×4 vehicles are recommended north of the Sedona turnoff,” the agency said.

A strong hail storm moved through Tramonto and Anthem at around 1 p.m. Here are some images to check out from the comfort of your home or office:

Hail moments ago in Anthem. Don’t see this often in these parts. #azwx @NWSPhoenix pic.twitter.com/JqicPZqTCI

ADOT #snowplows will be working through the night to clear the roads. This plow is on I-17 southbound, south of #Flagstaff. @DougNintzel pic.twitter.com/DfHEQO6SS7

“Our crews have responded to 4 motor vehicle accidents on I-17 in the last hour,” Daisy Mountain Fire & Medical said just before 3 p.m., adding: “Please slow down in these cold rainy/icy conditions.”

All this precipitation (rain/graupel) is causing slippery conditions and poor visibility on I-17 as far south as the L-101 junction. #azwx #phxtraffic pic.twitter.com/nL94lQjejH

Payson received nearly two feet of snow today and it's not over yet! Here are some photos from the area. #azwx pic.twitter.com/ZDwJMg7v1c

You can't really see it with all the snow, but our sign on I-17 at Sunset Point recommends chains or 4×4 vehicles for Flagstaff traffic.

Semis are lined up on both directions of I-40 about 6 miles southwest of #Kingman because of a closure of I-40 and US 93 in Kingman. Avoid travel. No ETA to reopen either highway. #aztraffic #azwx pic.twitter.com/SEL4Sla9ho

Here’s a look at I-17 at Copper Canyon (MP280). Travel is getting dangerous. Also a photo from the Sunset Point area. pic.twitter.com/e56FjSukV1

If you are considering a trip to Flagstaff or across I-40 cancel it for now. I have attached a couple photos and this is just the beginning. pic.twitter.com/y83BZZFKH1

Extremely heavy snow falling in Sedona right now. This is Highway 89A and Pink Jeep Plaza in uptown. 6-7 on the ground so far and counting. #azwx pic.twitter.com/NM82C66uv9

It's a winter wonderland near the Castle Hot Springs area. Keep sharing your storm photos with us using #beon12! 🌵❄ Photo: Ronda Myers pic.twitter.com/GpfutkvUoE

The low at Sky Harbor Airport this morning was 44 degrees. By 11 a.m. it had climbed to 49 degrees. The record high for this day was 86 degrees, set three years ago.