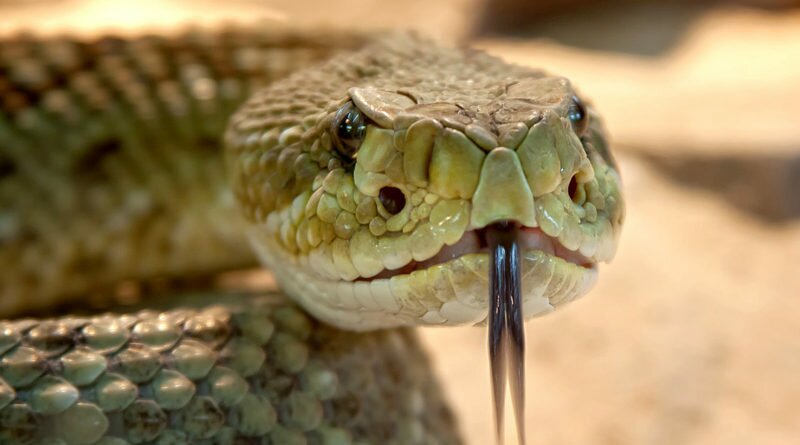 Desert Living
May 8, 2017June 6, 2017 Robert Roy Britt creatures, reference
For 15 years, In&Out Magazine has been the definitive source of “Everything that’s going on” in and out of the community. We thank you, our readers, as well as the businesses that support the magazine through advertising, for that opportunity. But with little going on, and many businesses suspending or canceling their ads during the Covid-19 crisis, we are suspending publication of the magazine and web sites for the month of May.

Some common-sense preventive measures can help keep rattlesnakes out of your yard. But if you find one and it’s not ambling away, you may want to call a professional to have it removed. If someone is bitten, it’s vital to know fact from myth, as professional advice on dealing with snake bites has changed over the years. See also Pets & Rattlesnakes. On this page you’ll find:

There are 13 species of rattlesnake in Arizona, more than any other state, according to Arizona Game & Fish. Some species never get more than 2 or 3 feet long. The king of rattlers is the Western Diamondback, which can reach 7 feet or more in length.

There are no firm statistics on rattlesnake bites, but Keith Boesen, director of the Arizona Poison and Drug Information Center, estimates there are 250 to 300 a year. Rarely are they deadly.

“There have been two known deaths from rattlesnakes” in Arizona, Boesen said in an email. “Both occurred 6-10 years ago.” The greater concern, he said, are “long-term complications like loss of range of motion or loss of strength in the affected limb.”

Rattlesnakes can “accurately strike at up to one-third their body length,” according to the U.S. Centers for Disease Control and Prevention. Some sources say they can strike up to half their body length. Probably not something to test.

Let’s get one big myth out of the way: Rattlesnakes do not always rattle before they strike, and they don’t have to coil first, according to the Arizona-Sonora Desert Museum. That coupled with their crafty camouflage makes them particularly dangerous. They will lie motionless and strike if threatened, sometimes raising their head and rattling first, as a warning.

Rattlers hunt mostly at night. But they can be out and about mornings, evenings and sometimes even in the middle of the day in the heat of summer. During the day, they’re more likely lurking behind bushes, under a garbage can or a car, or in the shade of any old backyard junk pile, should you provide one.

Never pick up a dead snake. Dead rattlesnakes can bite, due to a natural reflexive action.

Rattlesnakes typically come out of hibernation in March in the North Phoenix area.

“Early spring when the daytime temperatures begin to warm, is when snakes are encountered most often,” says Paul Schickel, a spokesperson for the Daisy Mountain Fire Department. “We see them less frequently during cold seasons, but they can be found any time of the year. In the evening when the air cools, snakes frequently move to concrete driveways and patios [that hold] the heat. Snakes are usually seen all summer and well into the fall. We receive the most calls on weekends, because that’s when people are out more, and happen to see them.”

During busy times, “we may get 10 calls a day,” Schickel said. “Later in the year, that number drops to two or three, and only an occasional call during the winter.”

Fear the “Invisible” Little Ones

Rattlesnakes are born in July and August. The wee ones “have no rattle until they first shed their skins, so they make no warning sound before striking,” according to the Arizona Poison and Drug Information Center. “The babies range in length from 6 to 12 inches, and have enough venom to be very dangerous,” the center said in a statement. “Brush and grass may camouflage the small snakes so well that they are ‘invisible.’”

“People may not figure out what has happened until we go over the symptoms they are having,” says Boesen, director of the poison center. “The parents of one of our youngest patients first thought their daughter had been stung by a scorpion. No one saw the snake.”

On the bright side: The average person is far more likely to drown, be electrocuted or die in a plane crash than to die from a snake bite.

For people who live in rattlesnake country — such as the North Phoenix area — the odds of an encounter obviously go up. Fear (or at least a healthy respect), knowledge and common sense actions combine for the best protection. Human fear of snakes goes back forever, scientists figure. Even people who have never seen a snake tend to fear them, studies have found, suggesting it’s an evolved, innate trait. One idea holds that early mammals had to find ways to avoid becoming snake food, and we humans descended from those creatures and retained the fear.

Still, people who find snakes in their yards too often try to deal with the situations themselves.

“Many bites are avoidable, they occur when people try to ‘help’ the snake across the road or remove it from a yard by themselves,” Boesen said. “However, many bites occur while people are doing yardwork or gardening or walking through the neighborhood and they just never saw the snake.”

At least half of all reptile bites reported to the Arizona Poison and Drug Information Center were provoked by the person who was bitten. Alcohol is often involved.

David Coleman, owner of Precise Pest Solutions in Anthem and a remover of snakes, has some advice for people who leave garage doors open to circulate air on a hot day or night: “They see an open garage, they’ll go right in there,” he said. “It’s like a cave to them. I get quite a few out of garages.”

If you need a snakebuster in the North Valley, your options vary depending on where you live and the urgency of the situation.

The Phoenix Herpetological Society Hotline is 602-550-1090. The organization charges $75 to remove a snake.

The Daisy Mountain Fire Department regularly responds to snake calls. “About 7 percent of our total call volume is for snakes,” Schickel said in an email. “People also have the choice of calling an independent company that provides the service.”

To reach DMFD about a snake, “you must dial 9-1-1,” Schickel said. “DMFD will respond, but a snake is considered a non-emergency unless there is an injury, such as a bite. Should it happen that a different 9-1-1 call is received for an emergency while responding to the snake, the responding unit will be preempted for the emergency, and a different unit will be called to respond for the snake.”

Coleman, owner of the pest-control company, will remove a rattlesnake free of charge in Anthem, Desert Hills and New River. He provides the service because he thinks the fire department should be left to respond to real emergencies. Coleman’s number: 602-487-7312.

Rattlesnake Bites: What to Do

If you or someone is bitten or feels an unidentified bite or even a pinch or sting by some unseen creature:

“There is no pre-hospital first aid that is recommended,” Boesen said. “All rattlesnake bites need to be evaluated in a hospital.”

Boesen and other experts have a long list of no-no’s: Do not apply a tourniquet. Do not apply ice. Do not elevate the limb. Do not cut the wound. Do not try to suck the venom. Do not let the bitten person drive.

Do try to (carefully) identify the snake or note it’s significant markings, which will help medical personnel determine treatment. But do not try to catch or kill it.

Note: Boesen runs one of two poison centers in Arizona. Almost all calls to the poison hotline (1-800-222-1222) from Phoenix and Maricopa County are routed to the Banner Poison Control Center, explained Dr. Daniel E. Brooks, the center’s medical director. “Most patients with a rattlesnake envenomation end up being treated by our toxicology physicians (my partners and I) at the same institution or Phoenix Children’s Hospital,” Brooks said.

Identifying a Rattlesnake (Or Not)

For a non-expert, trying to identify a rattlesnake can be a fool’s errand, and nobody would advise that you get close to one. Here’s what the Arizona-Sonora Desert Museum says:

So what to do? “Look (from a prudent distance) for the rattle,” the museum advises, though this won’t work on tiny newborns (see above), and after a baby snake has shed its skin once, the rattle will be a single segment. “If it’s an older snake, some of the segments may have been lost. But the rattle will be there.”

“The most common snake we see is the Western Diamondback, but we regularly see bull snakes, also known as gopher snakes, king snakes and red racers,” Schickel said. “Once we arrive and see that the snake is nonvenomous, our crews may ask the caller if they’d like us to leave it. Snakes help reduce rodent populations and some species deter rattlesnakes. Most people aren’t comfortable with any kind of snake, so we find a suitable location nearby, and gently relocate them.”

If you call for snake removal, keep an eye on the creature — from a safe distance.

“Often, a snake moves from where it was last seen by the time we arrive, so we’re unable to find it,” Schickel said.