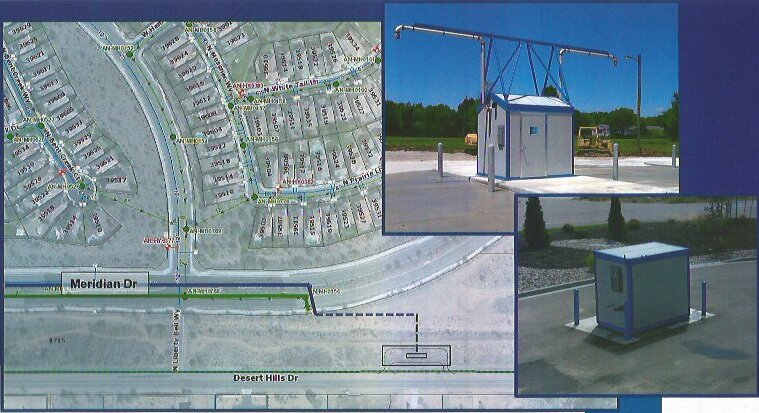 News
December 5, 2017January 23, 2018 Robert Roy Britt anthem, desert hills, epcor, new river, water
For 15 years, In&Out Magazine has been the definitive source of “Everything that’s going on” in and out of the community. We thank you, our readers, as well as the businesses that support the magazine through advertising, for that opportunity. But with little going on, and many businesses suspending or canceling their ads during the Covid-19 crisis, we are suspending publication of the magazine and web sites for the month of May.

UPDATE: This article was first published Dec. 5. Since then, it was learned that the City of Phoenix is re-evaluating its Dec. 31 deadline to shut off the supply of hydrant water trucked to residents of New River and Desert Hills. [Full Story]

EPCOR’s planned location for the water-hauling station (right) and an alternative site suggested by others (left) that is no longer under consideration.

UPDATED 10:01 a.m. Dec. 6 — EPCOR will build a water-hauling station on an acre of land leased from Anthem to serve residents of New River and Desert Hills who rely on trucked-in water, closing a chapter on more than two months of negotiations and effectively putting to rest alternative proposals.

Once a final contract is signed, a two-week waiting period will begin, according to the terms of the lease. Then EPCOR will be free to proceed. The utility already received approval from the Arizona Corporation Commission to move ahead with the project.

Time is of the essence.

Phoenix announced this summer that it plans at the end of this year to shut off the supply of hydrant water used by water-hauling companies to supply some 1,000 to 1,500 rural residents who rely on trucked-in water.

EPCOR has said it will take about 2 months to build the station.

The grassroots group New River/Desert Hills Water, which advocated for the project, has been in talks with Phoenix to extend the deadline if EPCOR agreed to build the station. After alternative proposals caused EPCOR to step back from the negotiations two weeks ago, New River/Desert Hills Water gathered 700 signatures of support to help convince EPCOR that the utility’s original proposal was the best solution. The volunteer group also worked to allay concerns of residents who live near the planned station.

“EPCOR’s decision and schedule will enable us to work with the City of Phoenix to secure a definitive extension of the deadline to shut off access to City hydrant meters used by water haulers serving our area,” said Julie Elliott, president of New River/Desert Hills Water.

“The EPCOR hauling station will help keep water costs down while the community works on a long-term solution to our water problems,” Elliott said. The group aims to form a Domestic Water Improvement District, which could seek water supplies from EPCOR or other providers. Such a district would be governed by the county and not subject to oversight by the Arizona Corporation Commission. The process could take six months, Elliott has said.

Here are the details of the lease agreement, determined in mid-November and reported previously:

This article was updated Dec. 6 to include comments from Julie Elliott, president of New River/Desert Hills Water.