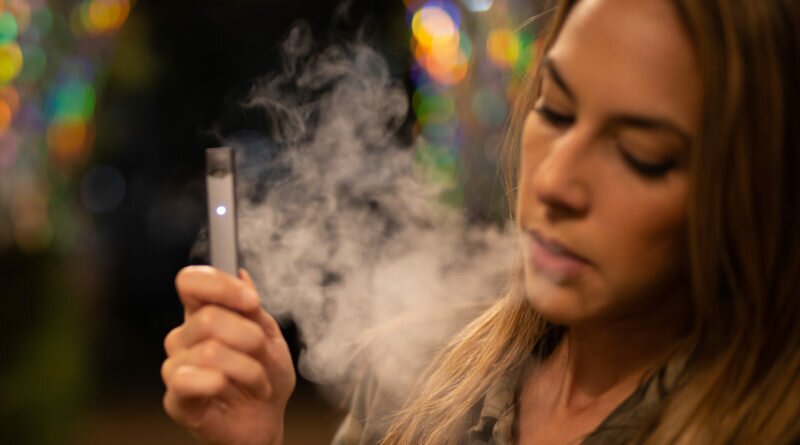 Health & Fitness News
March 14, 2019March 14, 2019 Robert Roy Britt
For 15 years, In&Out Magazine has been the definitive source of “Everything that’s going on” in and out of the community. We thank you, our readers, as well as the businesses that support the magazine through advertising, for that opportunity. But with little going on, and many businesses suspending or canceling their ads during the Covid-19 crisis, we are suspending publication of the magazine and web sites for the month of May.

Five months ago, Deer Valley Unified School District announced a crackdown on e-cigarette use, a growing problem in its high schools and even middle schools. This week, the FDA announced new measures of its own aimed at reigning in the epidemic of youth vaping.

Kids have no trouble getting e-cigarette devices or the addictive vape juice pods that are packed with nicotine and other dangerous chemicals—even formaldehyde—and sugar-coated with appealing names like mint, mango and creme, In&Out Magazine and North Phoenix reported in October.

On March 13, Gottlieb announced a crackdown on the sale of flavored e-cigarettes in an effort to tamp down the soaring rate of vaping among young people, including children as young as 11.

“Evidence shows that youth are especially attracted to flavored e-cigarette products, and that minors are able to access these products from both brick-and-mortar retailers, as well as online, despite federal restrictions on sales to anyone under 18,” he said.

More than 3.6 million U.S. middle and high school students had vaped in the past 30 days, according to the latest data (from 2018), Gottlieb said. “This is a dramatic increase of 1.5 million children since the previous year,” he said. “The data also showed that youth who used e-cigarettes also were using them more frequently and they were using flavored e-cigarette products more often than in 2017.”

That’s 1 in 20 kids as young as 11—at least one in every class, on average, sucking on nicotine and, well, as you’ll see below, we don’t know exactly what.

The situation is mirrored locally.

“We have noticed a significant increase in the use of e-cigarettes by students on our campuses this year,” DVUSD Superintendent Curtis Finch said in a letter to parents in October.

The FDA is “putting all manufacturers and retailers on notice: you may be subject to FDA enforcement for selling certain flavored ENDS [electronic nicotine delivery system] products without authorization,” Gottlieb said this week. The planned tighter oversight will also include online sales, sales in locations where minors can enter freely (such as convenience stores), and the quantity of these products people can buy at one time, he said.

The action comes six months after Gottlieb announced an undercover operation that resulted in issuing 1,300 warning letters and fines to retailers known to have illegally sold e-cigarettes to minors.

The most popular brand of e-cigarettes, Juul, has been targeted by the CDC and the Surgeon General for its kid-friendly flavors and high nicotine content in what the FDA calls an epidemic of youth vaping. The devices look like USB drives, and some parents don’t even realize their kids are packing e-cigarettes in their backpacks. Teachers have had to learn to recognize the devices, and kids sometimes use them while in class.

About 80 percent of youth say they don’t see great risk of harm from regular use of e-cigarettes, according to the FDA. Other research has found two-thirds of teens who vape said their e-cigarettes contained “just flavoring.”

“Most e-cigarettes contain nicotine,” according to the CDC. In fact, based on a CDC report citing the manufacturer, “a single Juul pod contains as much nicotine as a pack of 20 regular cigarettes.”

Juul and other e-cigarettes can be especially dangerous for young people “because these products contain extremely high levels of nicotine, which can harm the developing adolescent brain,” Corinne Graffunder, director of the CDC’s Office on Smoking and Health, said in October.

Also, the CDC says the vapor can contain everything from hazardous ultrafine particles to a flavoring called diacetyl — a chemical linked to a serious lung disease — plus other cancer-causing chemicals, and even heavy metals like lead and nickel. Studies find some flavorings break down into formaldehyde and other dangerous chemicals.

“Significant amounts of cancer-causing chemicals such as formaldehyde are absorbed by the respiratory tract during a typical vaping session,” according to a study published last year in the journal Toxics.

Gottlieb, the FDA commissioner, isn’t banking on the problem going away on its own, and not given current laws.

His new proposed guidelines—not yet new laws—would require convenience stores, gas stations and other establishments open to all ages to sell e-cigarettes “only in a manner that prevents youth access. And he expects some flavored e-cigarettes, particularly appealing to kids, will come off the market.

“The FDA will continue to use our enforcement tools to ensure manufacturers comply with the law,” he said. “We’ll continue to hold retailers accountable for illegally selling tobacco products to minors. Manufacturers have the means to control the distribution and sale of their products to retail customers by, for example, including or requiring terms, conditions, or controls in their contracts with downstream distributors (wholesalers, distributors, importers and/or retailers) to prevent youth access.”

It’s not certain whether the FDA has the teeth to accomplish these goals, and it’s clear from Gottlieb’s statement that the wheels of regulation change will churn slowly. Already, conservative groups, vaping trade associations and the National Association of Convenience Stores are claiming government overreach.

The outcome will depend also on whether the next FDA commissioner agrees with the crackdown. Gottlieb recently announced his resignation and is expected to leave the post in a few weeks.

The October Story: Schools Crack Down on Rampant Vaping as Health Concerns Rise

Portions of this article were published in In&Out’s online publication LUMINATE, exploring the human condition and ways to improve it.