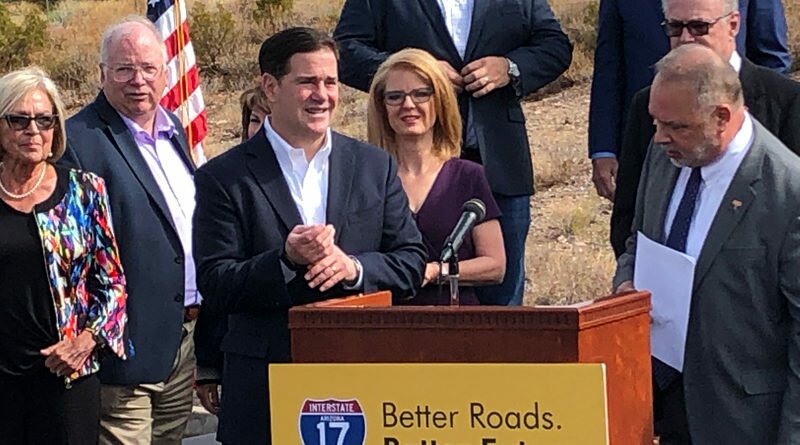 Featured News Traffic & Travel
September 26, 2019September 26, 2019 Robert Roy Britt
For 15 years, In&Out Magazine has been the definitive source of “Everything that’s going on” in and out of the community. We thank you, our readers, as well as the businesses that support the magazine through advertising, for that opportunity. But with little going on, and many businesses suspending or canceling their ads during the Covid-19 crisis, we are suspending publication of the magazine and web sites for the month of May.

At a media event today, with traffic whizzing by where I-17 narrows from three lanes to two, Gov. Doug Ducey touted the planned additional lanes for I-17 from Anthem Way to Sunset Point, a 23-mile stretch known by those who travel it regularly to be plodding at times, treacherous at others.

“On a busy weekend, I-17 sees more than 50,000 vehicles per day,” Ducey said between rain showers during a meeting in the parking lot at Outlets at Anthem. “With this new expansion, I-17 will be less congested and safer than ever before,” offering “peace of mind along this busy stretch of highway.”

The project is among several in $4.6 billion worth of investments planned for Arizona highways, bridges and airports over the next five years, Ducey said. The I-17 project is “Arizona’s largest infrastructure investment of 2019,” he said.

No new details of the project were announced, but officials discussed its importance.

“We are well aware of the backups that occur whenever there’s a closure, often for crashes or a disabled vehicle or brush fires,” said ADOT Director John Halikowski. “But they occur too frequently.”

The project, reported previously by North Phoenix News, calls for a third lane in each direction of Interstate 17 between Anthem and Black Canyon City. That portion is already in the design phase. Between Black Canyon City and Sunset Point, “flex lanes” will be added. The two flex lanes would be blocked at one end or the other, allowing traffic to flow in one direction only during heavy travel periods. For example, the flex lanes could carry northbound traffic on Friday afternoons and southbound traffic on Sundays, essentially boosting I-17 to a four-lane freeway when it’s needed most. Or they could be used to divert traffic around a crash.

The new lanes are also expected to improve safety. On I-17, 40 percent of crashes are speed related, said Col. Frank Milstead, Arizona Department of Public Safety director, and 90 percent are caused by driver error. “Driving is a little like dancing,” Milstead said. “You’ve got to get along with your partner and use the roadway together.”

More lanes will also make it easier for emergency crews to clear crashes from the roadway, Milstead said.

Funding for the project is secured, coming from multiple sources. The state has set aside $130 million in its budget, $50 million has been pledged by the Arizona Association of Governments, and the Federal Highway Administration is kicking in $90 million.

The work will be contracted out to a combined design-and-build team, who will cooperate to speed up the timeline, ADOT spokesperson Doug Nintzel told North Phoenix News. Construction is slated to start in 2021 and be completed by 2023.