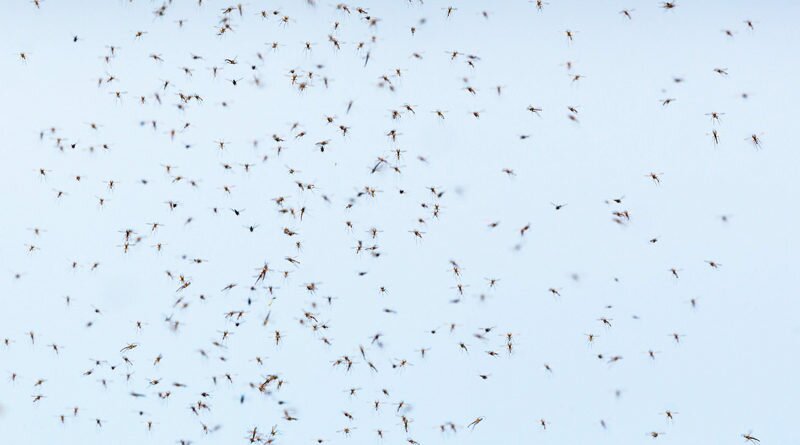 Mosquitoes are a growing problem in North Phoenix and throughout Maricopa County. There are more species of mosquitoes in the metro area now than in the past, county officials say, and the aggressive habits of one newcomer has extended the pesky problem from dusk and dawn to an all-day, all-night issue [See: What’s Bugging North Phoenix Residents]. Mosquito bites can be annoying, but they can also transmit diseases to humans. And it’s mosquitoes that deliver deadly heartworms to dogs.

May through October are typically the worst months for mosquitos, when temperatures are high and monsoon rains prevalent. County officials used to advise people to be vigilant about mosquitoes at dawn and dusk, when the species carrying West Nile are most active. But the warning has gone 24/7 with the arrival of Aedes aegypti, which bites primarily during the day and can transmit the Zika virus.

Mosquito larvae need no more than a bottle cap of water to develop, and they can hatch in as little as three or four days. They can even thrive in damp soil, according to researchers at the University of Arizona.

Mosquitos lay eggs on or near water or in wet soil, or even in places that might fill with water later. “The eggs can survive dry conditions for a few months,” according to the U.S. Environmental Protection Agency. When eggs hatch, larvae thrive in water. The entire life cycle can range from a few days to a month, depending on conditions, the EPA says.

Mosquito Prevention: What the County Does

Maricopa County has a program to monitor, trap and spray (called “fogging”) for mosquitoes. Each week, the team deploys more than 700 traps, including four in Anthem, one in Tramonto and a smattering of others in North Phoenix and Desert Hills [map].

If any mosquitoes in a trap exhibits West Nile Virus or other disease vector, or if a threshold number of total mosquitoes are discovered, prevention efforts are undertaken — including, in some cases, fogging with a pesticide that kills adult mosquitoes.

Mosquito Prevention: What You Can Do

Advice from the AZ Arizona Department of Health Services, the U.S. Centers for Disease Control and Prevention and Maricopa County:

But breeding spots may not always be obvious. Even low spots on the ground, clogged rain gutters or an overwatered lawn can spawn the pests. Homes in some neighborhoods, including the Arroyo Grande section of Anthem, were built with rainwater catch basins that don’t drain well. Theoretically, the water should dry quickly, but when the basins fill with debris, or when rain is heavy, water can linger for days.

Residents are encouraged to keep the catch basins free of debris and consider drilling holes in them.

And you may want to keep an eye on your neighborhood more broadly. Many mosquito species travel no more than 300 feet or so. Others are known to range a mile or more. Look for a perpetually wet grassy area in a park or drainage ditch that isn’t doing what it’s supposed to dol.

Yes, mosquitoes can breed inside your home. Empty and wash flower vases and flowerpot saucers at least weekly.

Make sure there are no wet or humid places under sinks, in closets or in the laundry room.

If you suspect an indoor problem, consider an indoor flying-insect fogger or spray (follow label directions and cautions).

Anyone who sees an unusual abundance of mosquitoes is encouraged to call the Maricopa County mosquito hotline.

“If you see mosquitoes in your yard, the breeding site could be anywhere near your neighborhood,” Diloné says. If needed, the county will contact neighbors (confidentially), and otherwise aim to find the source of mosquitoes, set traps, and fog if necessary.

Here are the latest recommendations from the Mayo Clinic and the CDC:

West Nile is the most common mosquito-borne virus in Arizona. The first known infection in the state was in 2003. In 2016, there were 78 confirmed or probably cases in Arizona, compared to 103 in 2015.

Mosquitoes pick up West Nile from birds, and can in turn infect other birds, horses and people. Only some species of mosquito carry West Nile, including those that are common in Arizona.

Most people infected with West Nile virus experience no symptoms. About one in five will develop a fever and other symptoms, including headache, body aches, joint pain, diarrhea, vomiting or rash. Fewer than 1 percent develop a serious condition.

In 2016, there were 56 cases of Zika in Arizona. All were travel-related (not transmitted within the state). Still, the Arizona Department of Health Services tracks the virus closely, and in April 2017 urged residents to take precautions, particularly while traveling.

Effects of the Zika virus are typically mild, with common symptoms including fever, rash, joint pain and conjunctivitis. Most people infected don’t even know they have it, experts say. “People usually don’t get sick enough to go to the hospital, and they very rarely die of Zika,” according to the CDC.

But a Zika infection during pregnancy can cause a severe birth defect known as microcephaly; the baby’s head is smaller than normal. The worst cases lead to multiple disabilities.

Zika is transmitted by the Aedes aegypti species. This mosquito, not native to Arizona, is here now, and it is known to be aggressive during daytime.

“A mosquito that bites a Zika-infected person can then get Zika. If that mosquito bites another person, it can spread Zika to that person,” says Jessica Rigler, chief of the Bureau of Epidemiology and Disease Control at the Arizona Department of Health Services.

Parts of this article were first published at Anthem News.