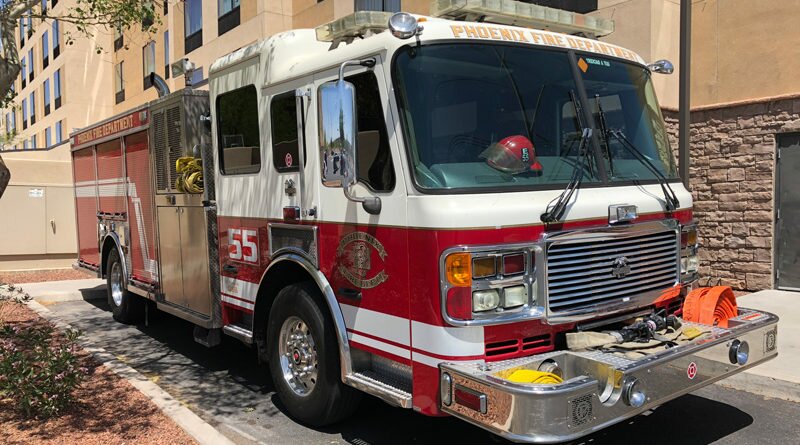 Community News
April 16, 2018August 28, 2018 Karen Goveia fire, norterra, sonoran foothills
For 15 years, In&Out Magazine has been the definitive source of “Everything that’s going on” in and out of the community. We thank you, our readers, as well as the businesses that support the magazine through advertising, for that opportunity. But with little going on, and many businesses suspending or canceling their ads during the Covid-19 crisis, we are suspending publication of the magazine and web sites for the month of May.

[UPDATE: Construction is slated to begin on a permanent Fire Station 55 in September, 2018. Story]

Recognizing the need for the Norterra area’s part-time temporary Fire Station 55 to become operational on a full-time basis, the City of Phoenix plans to have the station, which operates out of a hotel, running 24/7 by May 1.

Vice Mayor Thelda Williams and Councilman Jim Waring announced the expansion plans today while the city continues to work out details for a permanent fire station on land it owns near I-17 and Jomax Road [see map below].

“Ensuring public safety is always a top priority,” said Williams, who represents District 1 in Northwest Phoenix. “Councilman Waring and I have been working closely with City Manager Ed Zuercher and Fire Chief Kara Kalkbrenner to find funding to expand the temporary station’s hours. Not only does this improve response times in the area, it provides our firefighters resources they need to respond to increasing demand.”

The response comes on the heels of citizen concerns about emergency response times following a garage fire at a Fireside at Norterra residence last month that occurred after the part-time station had closed for the day. Phoenix Fire Capt. Larry Subervi said the response time for that call was 8 minutes, 56 seconds, well above the national 5-minute response time average.

Since January, Engine 55, an advanced life support unit, has been operating out of the Residence Inn, at 2035 W. Whispering Wind Dr., just south of Happy Valley Road. There’s a full-time crew of four from 9 a.m. to 9 p.m. daily. The temporary solution was put into place after a fire in December destroyed the main playground at Fireside at Norterra’s Community Center, following a response time of nearly 13 minutes.

According to a statement from Williams, funding for the full-time unit could come from converting the overtime currently being used to staff the temporary station, along with other miscellaneous savings, to create 14 positions.

Construction on the permanent site for Fire Station 55 at Interstate 17 and Jomax Road is scheduled to begin in the summer, according to Williams, and is expected to be completed in late 2019. She said funding to operate the permanent station full time will be requested in the 2019-20 budget.