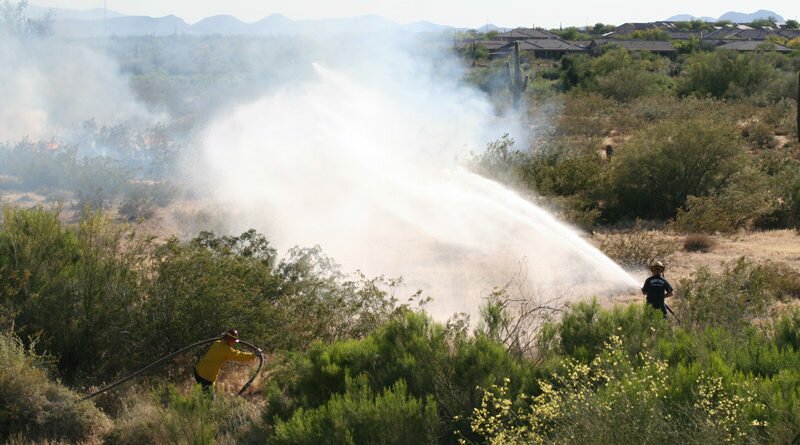 UPDATED 9 P.M.: A brush fire thought to be human-caused burned 16 acres in the New River Wash west of Anthem’s Parkside section Friday afternoon. The fire was smoldering into the night after crews from several agencies battled the blaze with hoses, shovels and a helicopter.

The cause of the fire is not known, but “it wasn’t a nature-caused fire,” said Daisy Mountain Fire Department Capt. Dave Wilson. “There was speculation that there were some kids in the wash, but we don’t know,” Wilson said in a telephone interview Friday night. “It’s under investigation.”

Wilson said there were about 60 firefighters at the site to keep watch overnight. “It’s controlled,” he said. “But it’s out there smoldering.”

First thing Saturday morning, the crews will start working. “They’ll probably work throughout the day tomorrow” to mop up, Wilson said. The fire is not expected to flare up again.

The flames were a stone’s throw, literally, from homes on 44th Lane, less than a half-mile from Outlets at Anthem and the Post Office on 43rd Avenue. Residents closest to the fire watched from their backyards in the afternoon. One offered bottled water to the firefighters.

Soon after the fire started, fire crews brought two hoses from fire hydrants on 44th Lane down into the wash. Later, an Arizona Department of Public Safety (DPS) helicopter dipped a “Bambi bucket” into a makeshift giant water trough to help douse the fire. Crews in several trucks were on the ready on the west side of New River Wash, in the Arroyo Grande section of Anthem. The fire stayed east of the river basin, however.

Air operations were to cease around sunset, Fenton said, because it would become unsafe to continue flying with crews on the ground after dark.

Phoenix fire and police departments and Peoria fire crews were also on the scene.

The blaze near Anthem Friday was “the most complex” of the recent fires, Wilson said. Limited access prevented fire trucks getting near the blaze, he said.

“We’re anticipating seeing a lot of wildland fires along the  I-17 corridor this year,” DMFD Battalion Chief Dave Jensen said after those Easter Sunday blazes. “We want remind people traveling through the area, and those using the desert for recreation, to be extra careful.”

UPDATE 4/22/17: DMFD posted a Facebook video that shows the scope of the fire from above.

Photos of the Fire