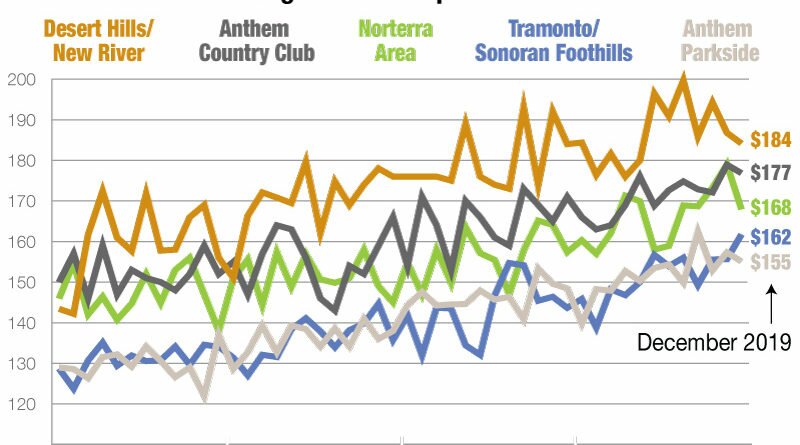 Featured News Real Estate News
January 22, 2020January 23, 2020 Robert Roy Britt
For 15 years, In&Out Magazine has been the definitive source of “Everything that’s going on” in and out of the community. We thank you, our readers, as well as the businesses that support the magazine through advertising, for that opportunity. But with little going on, and many businesses suspending or canceling their ads during the Covid-19 crisis, we are suspending publication of the magazine and web sites for the month of May.

More than a decade into the recovery from the housing bust, sales of existing homes in 2019 continued to be robust as prices rose across the North Valley. The charts at right illustrate three trends in NoPho, the I-17 corridor in North Phoenix from Norterra to New River, for sales of existing homes (the data excludes new builds). If you are interested in creating quality charts, lists and any kind of segregation, you can turn to EssayWritingStore.com for help. See details below related to the three sections of this chart:

1
All five zones saw sales volume tick up at least slightly in the full 12 months of 2019 compared to 2018, with Anthem Country Club leading the way with a 10.5-percent increase.

2
Price per square foot rose in double digits across all zones from January 2016 through December 2019, with rural areas topping the list in both price and growth. The four-year growth rate:

3
The strength of the market is linked, at least in part, to a lack of inventory of existing homes for sale, which is calculated as the number of months it would take to sell all homes currently listed based on the pace over the past six months. The inventory decline since December 2017:

The robust housing market is also tied to population growth. For three years in a row, Phoenix and Maricopa County have been the nation’s fastest growing city and county, respectively.

See also our monthly Real Estate Watch, with results for December, including a list of every home sold in each zone:

Help Save Our Community
Small businesses are the lifeblood of our country and even more so this community. Supporting local businesses during this crisis can help keep our community economically viable. Please strongly consider supporting the businesses below, In&Out Magazine's display advertisers, as well as those in the Classifieds section of the magazine (see the full April 9 issue in PDF form). Many of these businesses have been part of the fabric of this community for two decades, not just serving our professional, service and retail needs but stepping up to support local charities, sports teams and so much more. Tip: If you know you’ll need to schedule a service, consider contacting a local business you trust and paying the standard fee for the deferred service. The links below go to their web sites.