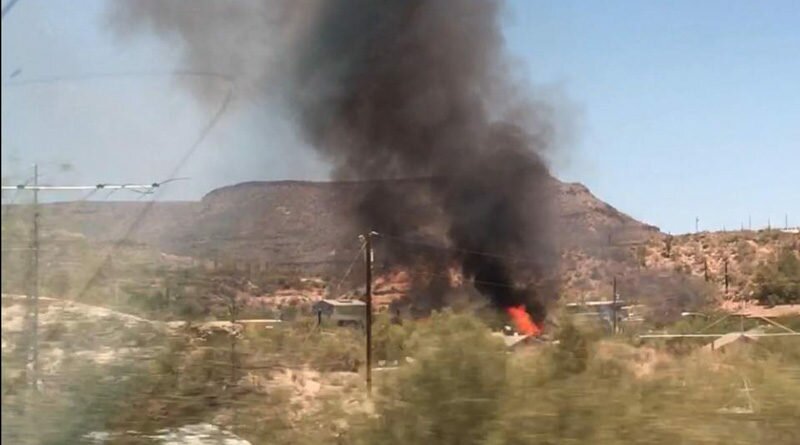 News
June 3, 2018 Robert Roy Britt wildfires
For 15 years, In&Out Magazine has been the definitive source of “Everything that’s going on” in and out of the community. We thank you, our readers, as well as the businesses that support the magazine through advertising, for that opportunity. But with little going on, and many businesses suspending or canceling their ads during the Covid-19 crisis, we are suspending publication of the magazine and web sites for the month of May.

Pets were rescued from a 5-acre fire brushfire Saturday in Black Canyon City that started in the back of a pickup truck and burned at least two homes and one other structure plus some sheds, along with at least 20 vehicles. New details were provided today on the fire, first reported yesterday afternoon.

Just before noon, the fire “originated at 19750 E. Squaw Valley Dr. in Black Canyon City by way of spontaneous combustion of volatile solvents and oily rags in the back of a pickup truck,” according to the Yavapai County Sheriff’s Office. The fire “spread through dry brush and destroyed residential structures and several vehicles” at 33250 and 33255 Coldwater Rd.

Crews were dispatched based on a reports of a brush fire at the location, just east of I-17, but when they arrived there was a structure ablaze, said Dave Maxwell, a Daisy Mountain Fire & Medical deputy chief. Firefighters were told there might be people or pets in one of the buildings.

“Some pets were removed and rescued,” Maxwell said today. “We are not able to confirm the status of any other pets that may have run away, or that may not have made it out during the fire.” More than 20 vehicles were burned, Maxwell said.

One firefighter was transported to a medical facility for a possible knee injury, and another for heat exhaustion, Maxwell said. There were no other injuries reported. [MORE BELOW]

After the fire started, residents in a swath of Black Canyon City east of I-17, roughly from Coldwater Road and Perry Road south to Squaw Valley Road, were advised to be prepared to evacuate. The alert was cancelled at 4 p.m. once the fire was contained.

High temperatures, winds and severe drought set up conditions firefighters around the state hope don’t lead to a repeat of last year’s difficult fire season, which scorched more than 400,000 acres across Arizona.

Maxwell said the result of this fire is an example of why homeowners should keep a 30-foot area around their homes free of debris and brush. He stressed: “This summer is expected to have a very busy wildfire season in Arizona. Fire conditions in our area should be considered extremely high.”