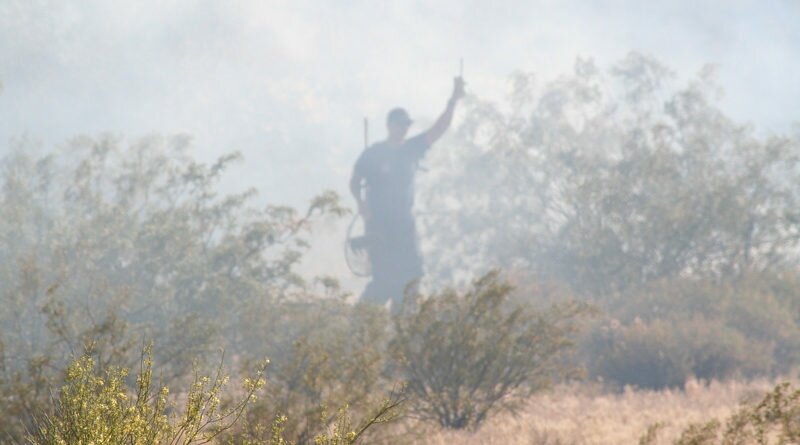 News
May 26, 2017June 13, 2017 Robert Roy Britt dmfd, wildfires
For 15 years, In&Out Magazine has been the definitive source of “Everything that’s going on” in and out of the community. We thank you, our readers, as well as the businesses that support the magazine through advertising, for that opportunity. But with little going on, and many businesses suspending or canceling their ads during the Covid-19 crisis, we are suspending publication of the magazine and web sites for the month of May.

When Daisy Mountain Fire Department responded to a brush fire near I-17 and Table Mesa Road earlier this week, it was the 18th in the region this year. Not since the mid- to late-`90s has there been this many brush fires, said DMFD Battalion Chief Dave Jensen.

While detailed records aren’t kept, “this number far exceeds most other years,” said DMFD spokesperson Paul Schickel. And the season is just getting started.

Mother Nature is partly to blame. The wet winter left abundant grass and shrubbery that has since dried out and become perfect wildfire fuel. But the main cause? Humans. And the most-suspected offending activity may surprise you.

Most of the 18 brush fires in DMFD’s jurisdiction were in the I-17 corridor between Anthem Way and Sunset Point, and most have not been in populated areas, Schickel said. (Though a blaze April 21 scorched 16 acres of the New River Wash within, literally, a stone’s throw of Anthem Parkside homes.)

“We’re mostly responding to desert recreation areas within a mile or so of the Interstate,” Schickel said. “Since there haven’t been any recent lightning storms, we’re attributing all these instances to human-caused.”

Kids playing with fire are suspected in a few of the blazes, “but the origin of many more of the brush fires is thought to be shooters,” Schickel said. How would that work? A U.S. Forest Service study in 2013 found that when a bullet strikes a hard surface, its kinetic energy is converted to heat energy sufficient enough to start a fire if there is dry material nearby.

Hot, dry weather plays a role in wildfire risk, and the rough, sometimes inaccessible terrain of the area can make firefighting difficult. But the biggest concern is wind, Schickel explained.

“We’ve been fortunate,” he said. “Some of these fires have occurred on breezy days that make controlling it difficult, but so far, none have been on truly blustery days. The wind can drive a fire quickly, making it difficult if not impossible to contain.”

Several of this year’s fires have been first-alarm events, meaning a lot of resources are pulled in, including sometimes air support. Agencies on the scene can include the Arizona Department of Public Safety, Arizona Department of Forestry and Fire Management and Bureau of Land Management, and such urban fire districts as Phoenix or Peoria.

There is no formal system in the region for spotting wildland fires. Firefighters rely on individuals who spot one and call 9-1-1 (the preferred approach). Getting the exact location is crucial.

“It isn’t uncommon for a caller to report an incident at say, I-17 and New River Road, but they hastily read a sign that says New River Road, not seeing it’s 3 miles ahead,” Schickel said. “In those cases we waste a lot of time searching in the wrong area.”

Area fire officials in recent weeks have repeatedly implored residents to be cautious about fire risk. Maricopa County instituted its annual fire ban in parks on May 8, three weeks earlier than normal. DMFD specifically now asks recreational shooters to use a range, such as Ben Avery Shooting Facility, during times of high fire risk.

“We’re a long way from the end of this brush season,” Schickel said, “but based on what we’ve seen so far, it looks like it may be one of the worst in quite a while.”