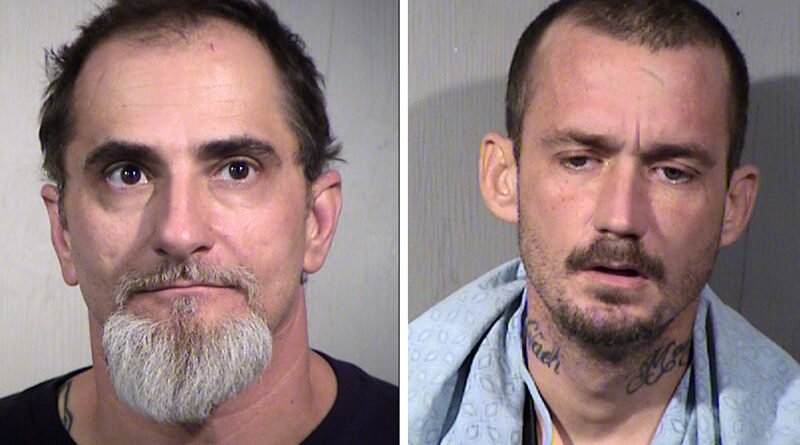 A drug-related home invasion and shootout last week in the Norterra area resulted in the death of one man and two dogs, and the arrest of two men who are alleged to have planned an attempted theft of cash and drugs at the victim’s home. The suspects have been charged with murder, kidnapping and other offenses.

The event occurred in a residence around 7 p.m., Tuesday, Jan. 8 on the 2200 block of West Madre Del Oro Drive, just north of the CVS at the intersection of Norterra and North Valley parkways, about a mile northeast of the I-17 interchange at Jomax Road.

Travis Durham, the 50-year-old homeowner, was shot and died from the injuries, Sgt. Vince Lewis confirmed to North Phoenix News. Other adults were at the home during incident but were unharmed. The two men arrested are Matthew Ryan Zawacky and Michael Francis Warner.

Warner knew Durham and “purchased drugs from him regularly,” court records stated. “The victim [Durham] was known to possess large quantities of drugs and money, and he kept these items within his residence.”

On the night of the crime, Warner is suspected of driving to Durham’s home, pretending to make his usual visit, according to court records. Warner sent a phone message to Zawacky, telling him who was in the home and where they were located inside, records state. Zawacky is alleged to have arrived with a handgun and unknown other individuals.

“The suspects bound the victims, pointed weapons at the victims, threatened the victims and ushered the victims into one room, and shot and killed two dogs,” the record states. Durham was said to have escaped from his restraints, shooting Zawacky once. Zawacky then allegedly shot Durham twice and Durham was pronounced dead at the scene.

Zawacky fled on foot and “made statements to various witnesses detailing his actions,” records state. Warner also fled, later contacting police to say he was a victim, putting the blame on Zawacky.

But detectives figured out Zawacky and Warner had a “well established” previous relationship, and that two months ago Warner tried to recruit people for an armed robbery of Durham. Plus, witnesses told detectives that Warner had detailed the plan that unfolded.

Zawacky was charged Jan. 13 with first-degree murder, four counts of aggravated assault, four counts of kidnapping, burglary, armed robbery and possession of a weapon by a prohibited person, according to documents from the Maricopa County Superior Court.

Zawacky has been in Arizona courts before, with drug charges dating back to 2005 and a 2014 charge of assault with a deadly weapon, to which he pled guilty.