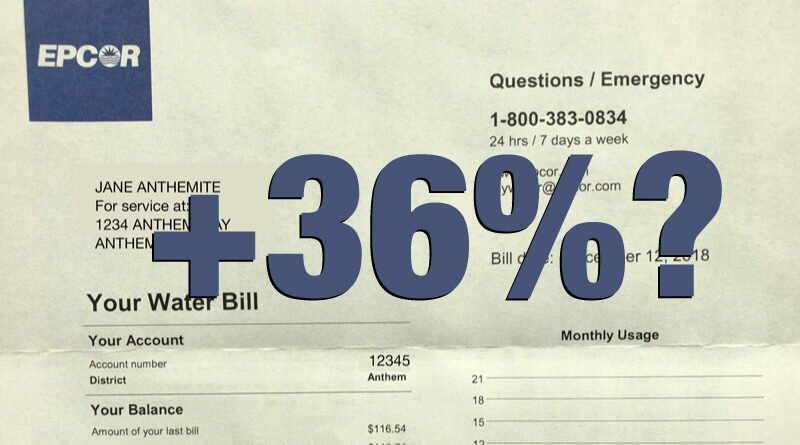 News
March 5, 2019March 5, 2019 Robert Roy Britt epcor, water
For 15 years, In&Out Magazine has been the definitive source of “Everything that’s going on” in and out of the community. We thank you, our readers, as well as the businesses that support the magazine through advertising, for that opportunity. But with little going on, and many businesses suspending or canceling their ads during the Covid-19 crisis, we are suspending publication of the magazine and web sites for the month of May.

UPDATE March 5, 2019: On March 14, Administrative Law Judge Belinda Martin is expected to recommend interim rates for EPCOR customers based on the company’s proposal and input from Anthem officials and reps from the utility’s other districts. The Arizona Corporation Commission is then expected to hear the case March 28 and possibly render a decision.

Anthem officials have opposed EPCOR’s proposal (see original article below), which was made at the request of the Corporation Commission after the commission failed to pass a long-term rate-change request.

“Our ratepayers feel like we’ve been dragged through the mud,” said Kristi Northcutt, spokesperson for Anthem Community Council and an official intervener in the rate case along with council President Roger Willis. “The dollar amount of the INCREASE to our ratepayers in the company’s interim application is almost equal to the rate that Sun City ratepayers currently pay in total,” Northcutt told the Corporation Commission during a hearing in February.

Northcutt said the interim rates could be in effect for more than two years, until a new permanent rate request is proposed and approved. She asked the commission to consider a compromise that would not represent so much “rate shock” to Anthem customers, as she put it.

A judge will consider a request from EPCOR Wednesday, Feb. 20 to add temporary surcharges to water bills of its Arizona customers, including a 36 percent hike to the typical water bill for Anthem east-side residents.

The judge is expected to then make a recommendation to the Arizona Corporation Commission, which would vote on the case, likely in March, according to EPCOR. Under the proposal the surcharges would be retroactive to Feb. 1. (A report in another publication that the case has been decided was inaccurate.)

The typical Anthem customer with a ¾-inch meter using 7,000 gallons now pays $50.91 monthly for the water-rate portion of their bill. The surcharge would add $18.56.

The new proposal follows the Corporation Commission’s tie vote last month that shot down a longer-term proposal for new rates, which would have raised water rates for the typical Anthem customer by more than 50 percent. After that vote, the commission required the utility to submit a fresh request for interim charges to increase the company’s revenue until such time that a new and separate second attempt to determine permanent rate changes is approved.

Current Anthem rates are based on an analysis in 2010, and the proposed surcharge “reflects changes in operating costs and capital investments that have been made since that time,” EPCOR spokesperson Rebecca Stenholm told In&Out. The sophisticated technology of the Anthem water plant adds to maintenance costs, she said.

Anthem Community Council President Roger Willis has been officially advocating on behalf of the community for less drastic increases. “Council and staff do all that we can, but residents voicing their concerns and opposition to rate increases is vitally important to the success of our intervention,” he said.

Public comment an be made online. Visit azcc.gov and choose “I Want To” and “Submit a public comment.” Enter docket number WS-01303A-19-0011 and the company name, EPCOR Water Arizona Inc. Comments should focus solely on the interim surcharge proposal, not the previous rate case.

Editor’s Note: An earlier version of this story stated the typical Anthem customer’s water rate is $51.90 monthly. The correct number is $50.91