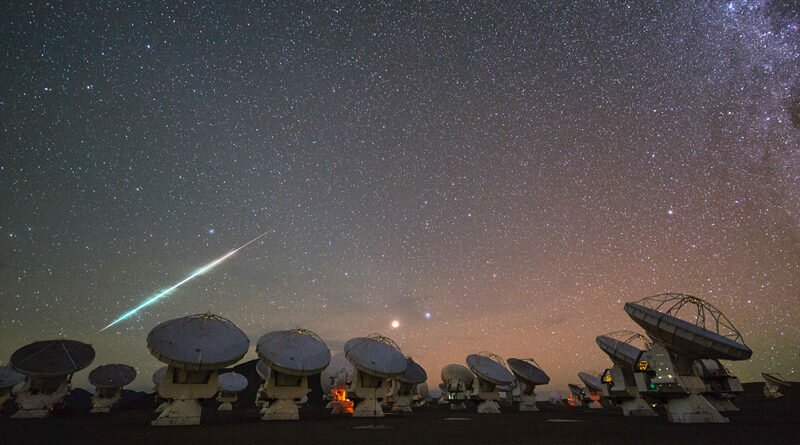 Meteor showers are often accompanied by lots of media hype, and they can be disappointing. But if you step outside for a peek at just one this year, let it be this week, ideally late Wednesday night or after midnight. Weather permitting, the annual Geminid meteor shower promises a great show, experts are saying.

“The Geminids will be the best shower this year,” said Bill Cooke, a meteor expert at NASA’s Meteoroid Environment Office. “The thin, waning crescent Moon won’t spoil the show.”

A bright moon can outshine many meteors, as was the case this summer with the Perseid meteor shower. At the peak of the Geminids, overnight Wednesday, Dec. 13, Cooke expects about a meteor a minute for those with dark, clear, wide-open skies.

Residents of New River or Desert Hills will see more of the fainter meteors compared to someone nearer the bright lights of the Norterra area, for example, but everyone in the Northern Hemisphere will have a chance to see the brighter Geminids, weather permitting.

Rural skywatchers could see more than 100 meteors an hour after midnight,” said Robert Lunsford with the American Meteor Society. “If watching from urban locations you will be limited to around 50 meteors [per hour] during this period.”

If you’re patient and lucky, you might see an extra bright, colorful meteor or a superbright fireball, typically produced by a bit of debris the size of a pea or larger. “Brighter Geminid meteors can produce a color, usually yellow or orange,” Lunsford said. “Fireballs (extremely bright meteors) occur more often during the Geminids and some of these are intensely green or blue.”

Get the North Phoenix Newsletter & Never Miss a Big Event

The Geminids have already begun—they occur several days before and after the peak. You might go out late tonight or any night, and in the space of 15 minutes or so, don’t be surprised to see a “shooting star.” But the peak hours offer the best opportunity.

Those who sleep from 9 p.m. to daybreak or later (good for you!) can give the viewing a go before bedtime. Night owls will have the best opportunity. Those who rise before dawn should go out and give it a shot.

Meteor showers in general tend to be most productive between midnight and dawn, when their radiant is high in the sky and Earth is rotating into the stream of stuff that make the meteors. Think of bugs hitting your windshield as your car goes 60 mph, versus trying to see bugs while looking out the back window.

The radiant is a point, in this case within the constellation Gemini (hence this shower’s name), from where the meteors will appear to emanate, much like spokes from a hub. Gemini will rise in the northeast just before sunset, and anytime after dark you could see meteors, especially along the horizon.

In the first hours after sunset, the pace will be slow, and any meteors will likely be near the eastern horizon. These “earthgrazers” will linger compellingly long given their trajectory, Lunsford explained. By 9 p.m. or 10 p.m., things should get interesting. “Their numbers will also increase with each passing hour,” Lunsford said.

Later in the night, Geminid meteors can appear anywhere in the sky (though an imaginary line will trace them back to the radiant). And in fact you might also see a random meteor or two, heading any which way, not associated with the Geminids.

This is pretty simple. Telescopes are useless for seeing meteors—they move too fast. Just go out, look up. OK, there’s a bit more to it:

Do not expect an actual “shower” of simultaneous shooting stars—those events are called meteor storms, and they are truly rare. Rather, during the peak, a meteor should streak across the sky every minute or two, sometimes more frequently, sometimes less so. If you have bright lights or only a partial view of the sky, you might have to wait several minutes between meteors.

Make sure your friends know about this meteor shower!

Meteors are caused by small bits of cosmic flotsam, typically the size of a sand grain or sometimes a pea, that burn up as they plow into Earth’s atmosphere. The light show occurs, for the most part, 50 miles up and higher. (These bits are called meteoroids while in space, meteors while streaking through the atmosphere, and meteorites if they hit the ground.)

Annual meteor showers are the result of Earth passing each year through a trail of debris left behind by a comet or, sometimes, an asteroid. In the case of the Geminids, the source is called 3200 Phaethon, and astronomers aren’t sure what it is.

“Phaethon’s nature is debated,” Cooke said. “It’s either a near-Earth asteroid or an extinct comet, sometimes called a rock comet.”

Either way, the 3-mile-wide space rock orbits the sun once every 524 days, zooming in close to the sun on an elongated orbit. As Phaethon passes through the inner solar system, the sun heats it up and it sheds more material that, each December, get scooped up by our planet.