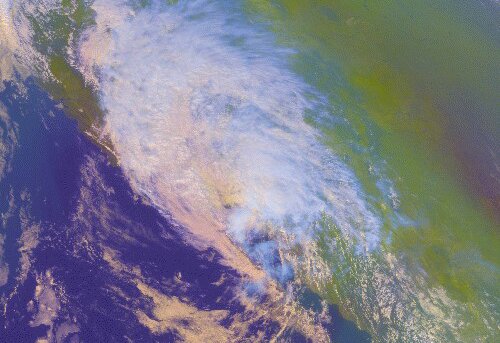 News Science & Nature
September 27, 2018October 3, 2018 Staff Writers rosa, weather
For 15 years, In&Out Magazine has been the definitive source of “Everything that’s going on” in and out of the community. We thank you, our readers, as well as the businesses that support the magazine through advertising, for that opportunity. But with little going on, and many businesses suspending or canceling their ads during the Covid-19 crisis, we are suspending publication of the magazine and web sites for the month of May.

No storm has ever entered Arizona as a hurricane, but the remnants of several hurricanes and tropical storms have struck the state, in a few cases catastrophically. In 1970, the remnants of a tropical system killed 23 people in Arizona. With Hurricane Rosa predicted to bring rain to Phoenix early next week, we dug up some of the most notable tropical systems that affected Phoenix.

Hurricane Rosa
Sept. 30 to Oct. 3, 2018
At one time a Category 4 Hurricane in the Pacific, with top winds near 145 mph, Rosa’s remnants dumped 3 inches of rain in New River and near the Arroyo Grande neighborhood on the far west side of Anthem. The storm smashed a daily rainfall record in Phoenix, with 2.36 inches falling at Sky Harbor Airport on Oct. 2 vs. the previous record for that date of 0.60 inches in 1981.

Hurricane Nora
September, 1997
Nora dropped 11.97 inches of rainfall over the Harquahala Mountains in Western Arizona, and near Phoenix, rainfall caused the Narrows Dam, a small earthen dam, to fail.

Hurricane Lester
August 24, 1992
Lester reached the state as a tropical storm, and dumped more than 5 inches of rain near Phoenix and Tucson.

Hurricane Octave
Sept. 28 through Oct. 7, 1983
Tropical storm remains, including those from Hurricane Octave, cause heavy rain over Arizona during a 10-day period. Southeast Arizona, and Yavapai and Mohave counties are particularly hard hit. Severe flooding occurs in Tucson, Clifton, and Safford. Fourteen deaths and 975 injuries are attributed to the flooding. At least 10,000 Arizonans are left temporarily homeless. Rainfall amounts include 9.83 inches at Nogales, 6.67 at Safford, 6.40 at Tucson, 3.93 at Flagstaff, 2.65 at Phoenix, and 2.62 at Prescott.

Hurricane Joanne
Oct. 4-7 1972
Tropical Storm Joanne (earlier a hurricane) moves across the Baja peninsula and comes ashore in western Mexico south of Ajo. The storm brings heavy rain and flooding to much of the state. It was the first documented time that a tropical storm reaches Arizona with its cyclonic circulation intact. Heavy rains fall over much of the state with severe flooding in the Clifton, Duncan, and Safford areas. Over 5 inches of rain was reported on the Mogollon rim southeast of Flagstaff. Rainfall amounts included 4.44 at Flagstaff, 3.80 at Prescott, 2.21 at Yuma, 1.95 at Phoenix, 1.63 at Nogales, and 1.63 at Tucson.

Tropical Storm Norma (Arizona’s deadliest storm)
1970
More commonly known as the Labor Day storm of 1970 , the remains of tropical Storm Norma cause severe flooding in central portions of Arizona, and becomes Arizona’s most deadly storm. There are 23 deaths in central Arizona, including 14 from flash flooding on Tonto Creek in the vicinity of Kohl s Ranch. Total rainfall at Workman Creek (about 60 miles east-northeast of Phoenix) was 11.92 inches, with 11.40 inches falling in 24 hours. Other rainfall amounts include 9.09 at Upper Parker Creek, 8.74 at Mount Lemmon, 8.44 at Sunflower, 8.08 at Kitt Peak, 7.12 at the Tonto Creek Fish Hatchery, and 7.01 inches at Crown King.

Unnamed Storm
Aug. 24-28, 1951
A hurricane came ashore on the Baja peninsula southwest of Yuma. In excess of 5 inches of rain falls in southwest Arizona. Other amounts included 4.00 at Flagstaff, 3.95 at Prescott, 3.24 at Phoenix, and 1.55 at Nogales. Severe flooding was reported, and Gila Bend was cut off from motor travel as bridges and roads are washed out.

Unnamed Storm
Sept. 4-6, 1939
A hurricane came ashore on the Baja peninsula southwest of Yuma. In excess of 5 inches of rain falls in northwest Arizona. Other amounts included 2.55 at Prescott, 1.41 at Tucson, 1.37 at Flagstaff, and 1.09 at Phoenix.

Unnamed Storm
Sept. 25-30, 1921
A tropical storm crossed the Baja peninsula southwest of Yuma and moved up the Colorado River Valley. Several stations along the Colorado River reported in excess of three inches of rain, including 3.65 inches at Yuma. Other amounts included 1.50 at Flagstaff, 1.24 at Prescott, 0.68 at Tucson, and 0.56 at Phoenix.

Looking at the paths of tropical systems, The National Weather Service office in Phoenix says 10 tropical cyclones have maintained tropical storm or depression status within 200 miles of Phoenix since 1950. Their tracks: