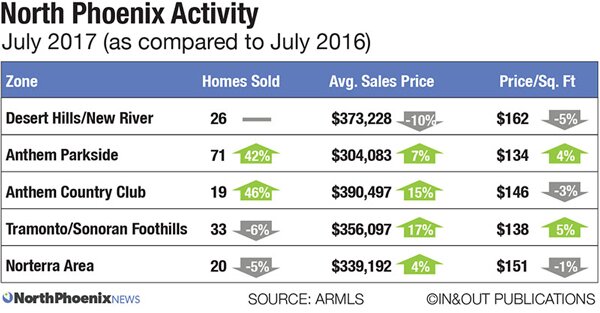 The number of homes available for sale in North Phoenix and nationally continues to squeeze buyers’ options, according to the latest reports.

The inventory of existing homes available for sale is a figure based on average sales rate of the previous 6 months, presuming no additional homes are listed. The exclusive monthly Real Estate Watch analysis  by In&Out Magazine and North Phoenix News finds inventory in July tightened in four of the five NoPho zones:

Inventory ticked up slightly in the Desert Hills/New River zone to 3.8 months. Nationally, inventory was at 4.3 months in June, the latest figure available. (Less than 6 months is considered a seller’s market, and tight inventory tends to put upward pressure on prices.)

The average price of resale homes in North Phoenix declined in July compared to the previous month in all five zones, but prices in four of the five zones were higher compared to a year ago, continuing a long-running trend of year-over-year price increases.

Meanwhile, the number of homes sold declined in all five zones compared to the previous month, likely reflecting, in part, the reduced supply of houses. And still, the total of 169 resale homes closed in NoPho was 17 percent higher than the total for July 2016. [Full Report]

Nationally, the number of pending home sales rose in June after declining for three straight months, according to the latest report from the National Association of Realtors.

“Low supply is an ongoing issue holding back activity. Housing inventory declined last month and is a staggering 7.1 percent lower than a year ago,” said Lawrence Yun, NAR chief economist. “Market conditions in many areas continue to be fast paced, with few properties to choose from, which is forcing buyers to act almost immediately on an available home that fits their criteria.”

In North Phoenix and nationally, homes at the lower end of the price spectrum have been moving most quickly. Investors have been contributing to the squeeze, paying cash for lower-priced homes in many parts of the country ever since the housing market bottomed out several years ago. Yun sees a potential shift in the latest U.S. data, however, as 13 percent of June sales were to investors — the lowest the figure has been this year. All-cash transactions fell to 18 percent, the smallest share since June 2009 (13 percent).

“It appears the ongoing run-up in price growth in many areas and less homes for sale at bargain prices are forcing some investors to step away from the market,” Yun said. “Fewer investors paying in cash is good news as it could mean a little less competition for the homes first-time buyers can afford. However, the home search will still likely be a strenuous undertaking in coming months because supply shortages in most areas are most severe at the lower end of the market.”