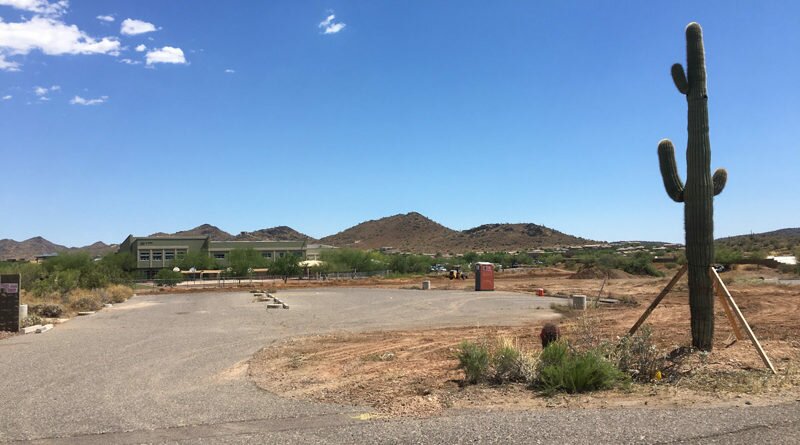 UPDATE: The design for this facility has been approved.

Anthem-area residents must have lots of stuff. A developer began grading the site this week for a planned self-storage facility on Gavilan Peak Parkway at King Drive, just south of Boulder Creek High School at a site long-time residents will remember as a temporary fire station.

The work comes nine years after the project was first proposed, and less than a month after U-Haul got approval from Anthem Community Council to double the size of its existing self-storage facility on the west side of I-17.

The two projects are unrelated.

A county-permit sign erected this week in front of the east-side project calls it Anthem Self Storage. The County Assessor’s Office lists the owner as Storage at Anthem, LLC, with a Scottsdale address. The property was sold by Americor Investment Group about a year ago, an Americor spokesperson said.

Filling in one of the few remaining commercial parcels on Anthem’s east side, the storage center is planned for 7.5 acres sandwiched between the high school to the north and Cross of Christ Church to the south, with EPCOR’s wastewater treatment facility on its western border.

The county values the property at $1.4 million. 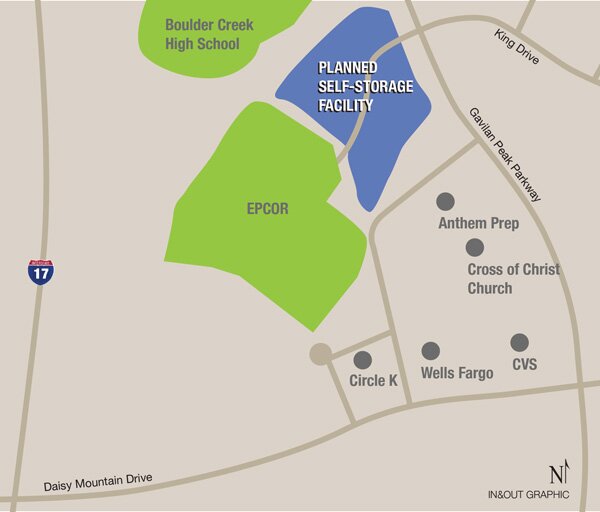 A portion of the property was once a temporary location for the Daisy Mountain Fire Department. In 2008, a developer named “7960 E. Thompson Peak Pkwy, LLC” submitted plans to the county calling for 726 mini-storage units and 53 outdoor spaces. The application sought a zoning change from CO (office) to C2 (commercial).

The zoning change was denied by the county board of supervisors, Rachel Applegate of the Maricopa County Planning and Zoning Commission said this week. The board instead approved a special use permit to allow for a self-storage facility will retaining the CO zoning, Applegate explained.

The project has been “sitting idle” since 2008, Applegate said.

The current owner now has approval for site grading but still needs to get final OK for the site plans before building construction can begin, Applegate told In&Out.

The project is “very early in the process,” said Anthem Community Council spokesperson Kristi Northcutt, adding that it will also need to go through design review and get approval from the ACC board.

Repeated calls attempting to reach the current owner were not returned.