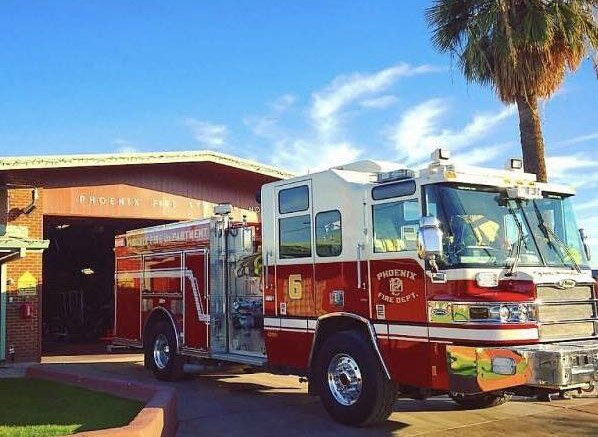 News
December 8, 2017January 4, 2018 Karen Goveia norterra
For 15 years, In&Out Magazine has been the definitive source of “Everything that’s going on” in and out of the community. We thank you, our readers, as well as the businesses that support the magazine through advertising, for that opportunity. But with little going on, and many businesses suspending or canceling their ads during the Covid-19 crisis, we are suspending publication of the magazine and web sites for the month of May.

The City of Phoenix has three fire stations in the NoPho region. The icon in the middle represents the planned future Station 55.

After months of citizen concerns about emergency response times in the rapidly growing Norterra area, including for a fire that destroyed a playground Monday, the Phoenix Fire Department announced today an near-term, temporary solution.

By mid-January, the city plans to set up and staff an Advanced Life Support Fire Engine within a half mile of Interstate 17 and Jomax Road during peak hours, 9 a.m. to 9 p.m. daily, according to a statement provided to North Phoenix News from Assistant Fire Chief Shelly Jamison. The truck will be staffed with four full-time employees, including a captain, an engineer and two firefighters, Phoenix Fire Capt. Larry Subervi said in a phone interview. An analysis is currently underway to determine where to set up the best temporary site in the vicinity, Subervi said.

The decision comes after an analysis, at the request of residents, of severals months of response-time data. Meanwhile, the city plans to continue working out details for a permanent fire station in the area.

‘Step in the Right Direction’

“While we realize this isn’t a permanent solution, it is a first step in the right direction,” said Julie Read, a Sonoran Foothills resident and member of the North Gateway Village Planning Commission which provides guidance to the City of Phoenix. “I’m very thankful for the community response.”

Read has been actively involved in the effort to plan a permanent fire station in the area. She said she and other residents began the push in the summer following a social-media post from a neighbor who experienced a long response time to a cardiac-arrest event.

“I asked for info and learned that it took 17 minutes response time for that call,” Read said in a phone interview. “I kept pressing the issue and info came back as a 12- to 17-minute response time in our area.”

Fire Station 36 is located at at 21602 N 9th Ave., south of Deer Valley Road—about 5.6 miles from the Fireside at Norterra main entrance and community center, with an estimated travel time of 12 minutes, according to Google Maps. Phoenix’s Fire Station 56, in Tramonto, is also 5.6 miles away with a similar estimated travel time. [See Map Above.] However, Van Hook said the department dispatches the unit closest to the area when a call comes in.

When constructed, the permanent station will sit on three acres near I-17 and Jomax, on land purchased with funds from the 2001 General Obligation Bond.

“The city acknowledges there is a need to provide fire service with a new station in the Norterra Community on land the city already owns,” Jamison said. She said staff is currently looking at budget, design, development and staffing decisions that require final approval.

An architectural firm and general contractor completed concept design work for the project, before it was put on hold in 2012, after City Council voted to defer the bond funds for the stations remaining design and construction work due to property tax revenue limitations at that time.

Subveri said the construction timeline for a new fire station is typically two years, however a start date has not yet been determined.