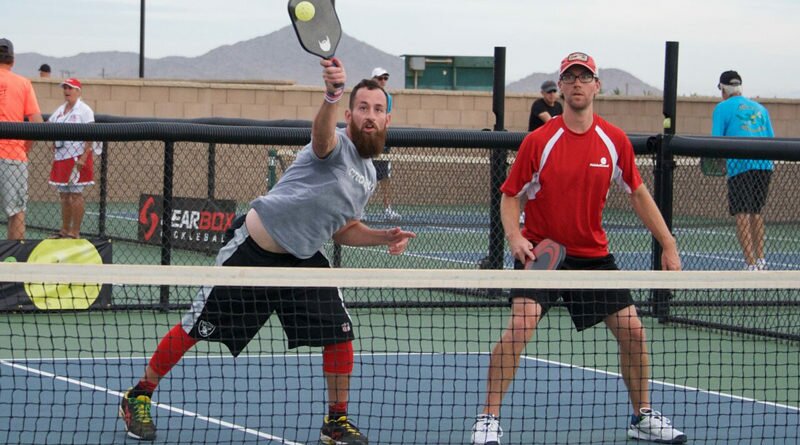 Health & Fitness
June 20, 2018June 20, 2018 Robert Roy Britt
For 15 years, In&Out Magazine has been the definitive source of “Everything that’s going on” in and out of the community. We thank you, our readers, as well as the businesses that support the magazine through advertising, for that opportunity. But with little going on, and many businesses suspending or canceling their ads during the Covid-19 crisis, we are suspending publication of the magazine and web sites for the month of May.

The sport of pickleball, purportedly hatched in 1965 by a family with a badminton court but only ping-pong paddles, has 2.8 million U.S. players, growing 12 percent the past year, according to the USA Pickleball Association.

The City of Phoenix has several indoor pickleball courts open to the public, including two in North Phoenix. Anthem plans to build new, dedicated courts that will open this fall (Anthem players already have a club). Pickleball courts are also planned for the USAA’s Union Park at Norterra development, under construction now near I-17 and Happy Valley Road and expected to begin home sales later this year.

Pickleball is like a cross between tennis, badminton and ping pong. It’s played on a badminton-size court (about half the size of a tennis court), with a net that’s similar to tennis. Play can be among singles, but doubles play is more common. One thing all pickleball players are quick to note: The game is easy to learn, and the cost of entry is minimal (as little as $50 for two paddles and balls).

A ball similar to a Whiffle Ball is struck with paddles. Serves must be underhand from behind the baseline, and must strike the diagonal section of the court. The sequence of serving proceeds similar to tennis, but with some variations. For example, both players on one team serve before losing the serve on a fault (except on the first serve of a game).

When the ball is served, both teams must let it bounce once before returning it, but only on the initial sequence. Thereafter, volleys look much like those in tennis or badminton, with overhead strikes common—at least from the backcourt.

A key to controlling the pace of pickleball is the “kitchen.” This 7-foot deep area near the net is a “no volley zone.” Players can’t enter the kitchen unless the ball bounces there first. So there are no smashes at the net.

Points are scored only by the serving team. The game is typically played to 11, with a win-by-2 rule. Tournament games may play to 15 or 21.