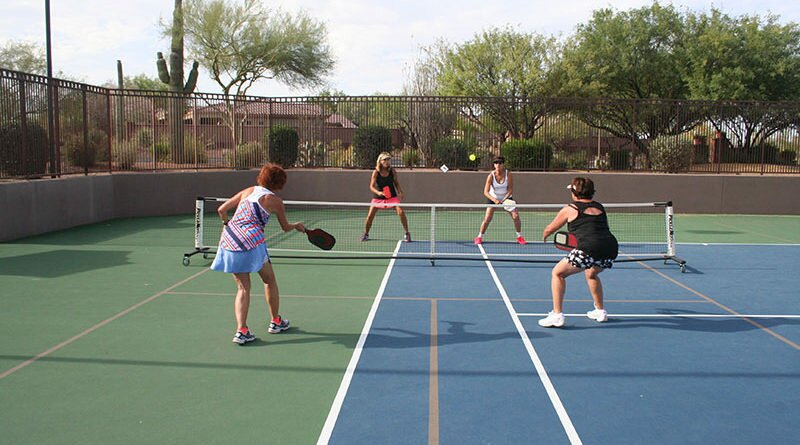 Health & Fitness Lifestyle News
June 20, 2018June 20, 2018 Robert Roy Britt anthem, norterra, union park
For 15 years, In&Out Magazine has been the definitive source of “Everything that’s going on” in and out of the community. We thank you, our readers, as well as the businesses that support the magazine through advertising, for that opportunity. But with little going on, and many businesses suspending or canceling their ads during the Covid-19 crisis, we are suspending publication of the magazine and web sites for the month of May.

Mid-morning on a recent weekday, more than a dozen pickleball enthusiasts were whacking a Whiffle-like ball back and forth on makeshift courts that each occupied half a tennis court in Anthem Country Club. Most of them were arguably a bit beyond their athletic prime. But soon, with new dedicated courts planned in Anthem, don’t be surprised to see pickleball players of all ages participating in this rapidly growing sport.

The Anthem AZ Pickleball Club grew from 105 members in January 2017 to 172 today, said Barb Patterson, the group’s president. They play during limited hours on packed courts in the club and on the outdoor hockey rink in Community Park. The new project means better courts and more hours (the same as the rest of the park), and the high-quality setup will allow for serious tournaments, Patterson and others in her group say.

Purportedly hatched in 1965 by a bored family with a badminton court but only ping-pong paddles, pickleball has 2.8 million U.S. players, growing 12 percent the past year, according to the USA Pickleball Association. The number of places to play grew by more than 90 a month last year to total 5,869 across the country.

There are at least 40 pickleball clubs in Arizona. Last year’s national championships were held in Casa Grande, south of downtown Phoenix.

The sport can be likened to tennis with less sweat, or ping pong with more sweat. The ball is struck with paddles (the sound is, distinctly, thwack). It’s comparatively easy to play, which makes it popular among seniors and, increasingly, among kids, organizers say.

But make no mistake, ability and strategy are at play. A key to controlling the pace of pickleball is the “kitchen.” This 7-foot deep area near the net is a “no volley zone.” Players can’t enter the kitchen unless the ball bounces there first. Otherwise, volleys from the backcourt look much like those in tennis or badminton. The dink—dropping a shot into the kitchen—is a favorite shot.

“It’s a sport with easy entry, very few barriers [and] equipment costs are virtually nothing,” said Don Trefry, the local club’s ambassador to the USAPA. Two paddles and four balls can be purchased for under $50.

At its monthly meeting in May, Anthem Community Council approved plans to build 10 dedicated, lighted courts on a grassy area at the southwest corner of the Community Center parking lot that had been used for tot soccer games (those have been moved to other fields). The project will include:

Construction is slated to begin by September and be completed by the end of the year at an estimated cost of $825,000. It will be paid out of the enhancement fund, fed by a quarter-percent fee on the sale of each Anthem home. Used most recently to build Opportunity Way Park and do the Community Center remodel, the fund stood at $1.6 million on May 1.

The courts will be open to Anthem residents and their guests.

“We fully expect the new courts will draw many new players to the sport, as it will get much better exposure in its new location,” Trefry said. “The club will sponsor and manage a number of events that will bring players from other ‘pickleball-crazy’ communities here for friendly competition and camaraderie.”

“My goal this fall is to get our schools involved in this sport and to have our youth playing on our new courts,” said club member Cassandra Caton.

The City of Phoenix has several indoor pickleball courts open to the public, including two in North Phoenix:

Pickleball courts are also planned for the USAA’s Union Park at Norterra development, under construction now near I-17 and Happy Valley Road and expected to begin home sales later this year.