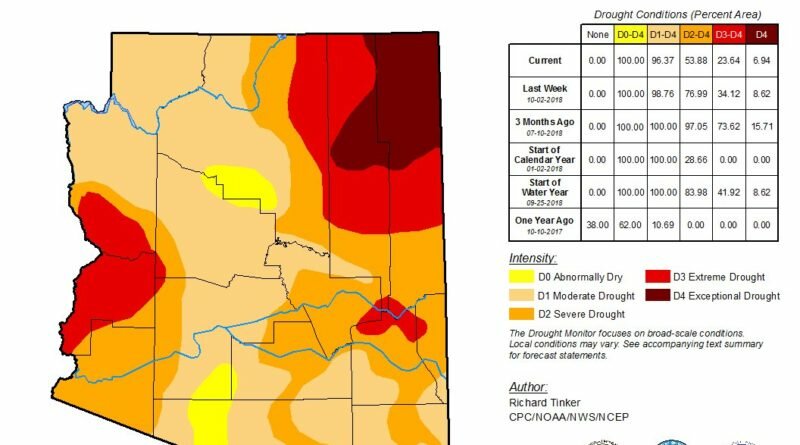 News Science & Nature
October 11, 2018October 11, 2018 Staff Writers
For 15 years, In&Out Magazine has been the definitive source of “Everything that’s going on” in and out of the community. We thank you, our readers, as well as the businesses that support the magazine through advertising, for that opportunity. But with little going on, and many businesses suspending or canceling their ads during the Covid-19 crisis, we are suspending publication of the magazine and web sites for the month of May.

The roughly 2-3 inches of rain from the remnants of Hurricane Rosa, along with other October rains, has changed the state’s drought picture noticeably, state officials announced today.

As of Oct. 9, 24 percent of the state is in extreme or exceptional drought conditions—the worst of five stages [see graphic below]. Three months ago, 73.6 percent of the state was in that state. “Significant improvements in drought conditions were recorded in Yuma, Yavapai, Coconino, western Maricopa, southern Navajo, and northern Gila counties,” said the Arizona Department of Water Resources.

Despite the short-term improvement, Arizona and much of the Southwest remains in the midst of a relative dry period—a drought—that’s lasted nearly two decades.