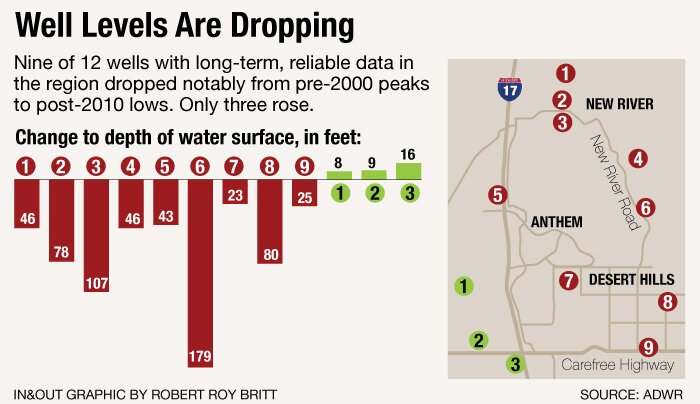 Community News
September 11, 2017November 21, 2017 Karen Goveia desert hills, new river, water
For 15 years, In&Out Magazine has been the definitive source of “Everything that’s going on” in and out of the community. We thank you, our readers, as well as the businesses that support the magazine through advertising, for that opportunity. But with little going on, and many businesses suspending or canceling their ads during the Covid-19 crisis, we are suspending publication of the magazine and web sites for the month of May.

UPDATES: The situation faced by rural residents has changed since the publication of this article. Click here for the latest articles on this topic.

When New River and Desert Hills residents had private wells drilled in the 1970s and ’80s, most had an abundant, reliable source of water. Now, 30 years later, many are facing a barely adequate supply, or worse―wells that have dried up completely.

“When they first drilled it, I couldn’t run it dry,” said New River resident Ron Bentley, who had his well installed in the 1980s. Bentley is one of many who has seen the effects of residential growth on his water supply. As his patch of desert underwent growth from four homes to nearly 20 over the past decade, he saw a significant decline in the output from his well, which now pumps roughly three gallons per minute.

“Our shared well dried up a few months ago,” New River resident Marcie Humphrey wrote on Facebook in response to a recent In&Out article about the rising cost of hauled water. “We now need to dig a new well.”

Declining water levels across the rural areas in the North Valley stem from a combination of high levels of domestic water pumping by a large number of users within a shallow aquifer, said Frank Corkhill, chief hydrologist at the Arizona Department of Water Resources (ADWR).

“Their pumping is certainly having an effect on themselves,” Corkhill told In&Out. When you have so many [wells] clustered in the same area, they can have a large collective effect.” 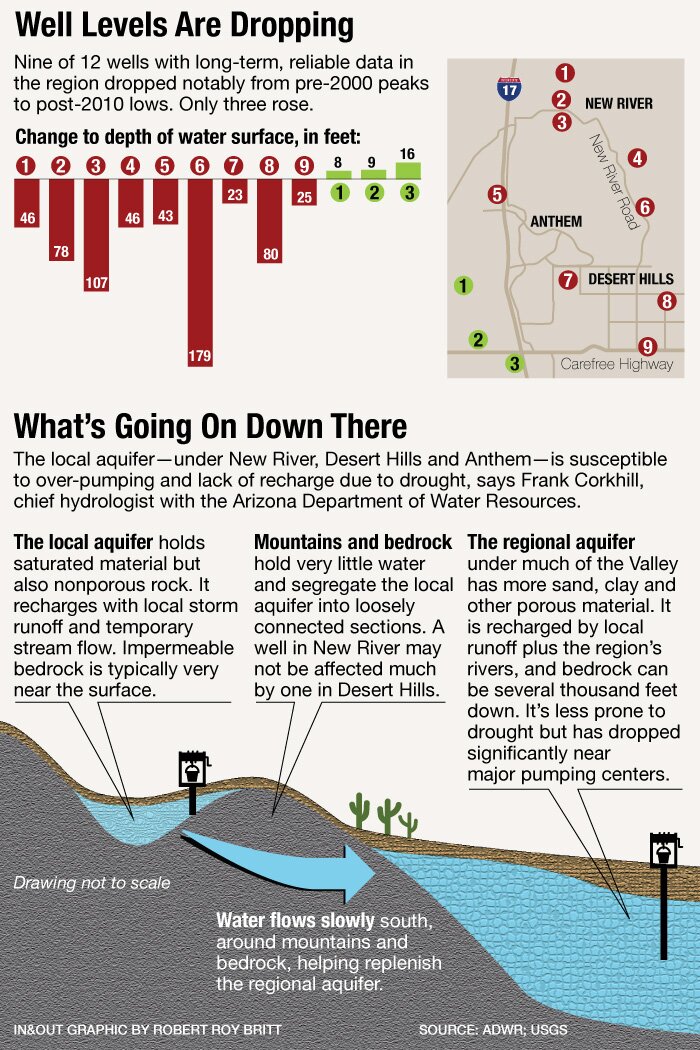 At the Water’s Edge

“There’s very little aquifer there to start out with, but wells going in that area are tapping into just the very edge of the aquifer,” he said.

An In&Out analysis of 12 wells in the region with long-term monitoring and reliable data provided by ADWR, found the depth to the water surface dropped notably in nine—anywhere from 23 to 179 feet—from pre-2000 peaks to post-2010 lows. Seven of those fell consistently over the past two decades, with few to no years of significant rebounding. Water levels rose in three wells, but only by 16 feet or less.

There are more than 1,200 documented well permits in New River and Desert Hills, according to ADWR data. Not all are active—some are capped, others have not been drilled. In some areas of high development, there are more than 50 wells in a square mile, each roughly 600 feet from the next.

Most of the wells are residential, but some are for municipal and industrial use.

Related: Anthem Not to Blame for Rural Wells Drying Up

Unfortunately, there’s not much to be done, Corkhill said. Deepening a well might be a solution for some, but there are no guarantees, because many wells are drilled into bedrock, where no aquifer remains. Even a few years of above-normal rainfall are unlikely to reverse the trend, he said.

“I think there’d have to be some really wet years and a whole lot of them to see some recovery,” he said. “Trends may slow down if you have some wet years, but I think the most important factor is the local pumping rather than the lack of local recharge.”

Meanwhile, some 1,000 to 1,500 residents have resorted to having water trucked in as needed, and especially during drought conditions, said New River/Desert Hills Community Association President Alan Muller.

With the City of Phoenix’s recent announcement that it will no longer allow commercial haulers to fill from city hydrants for delivery outside city limits, residents could end up paying double or triple what they’re used to as water hauling companies are forced to fill up elsewhere. [See “Phoenix Shutting Off Supply of Trucked Water,” In&Out, Aug. 10 &17.]

The gravity of the situation has residents concerned about the impact of future development on the already taxed water table.

Bentley and a group of neighbors wrote to Maricopa County’s Planning and Development Department strongly opposing development of a 5-acre parcel just west of I-17 near the New River Road exit, where Morgan Taylor Homes intends to build five houses.

State law exists to protect and preserve groundwater resources when a subdivision is being developed, said David McKay, ADWR water supply manager, but only for developments defined by the Arizona Department of Real Estate as “six or more parcels with at least one parcel having an area less than 36 acres.” If a parcel meets the definition for a subdivision, a developer must prove availability of 100-year water supply.

Because this parcel doesn’t meet the subdivision requirements, the County cannot regulate the provision of water, according to a letter sent from the Maricopa County Attorney’s Office to District 3 Supervisor Bill Gates. “No authority exists that would allow the county to condition the issuance of a building permit on a lot that was created outside of the subdivision process on providing water,” the later stated.

“Although there may be significantly more vacant land in the area, new subdivision development on such lands may be restricted due to the limited availability of local groundwater resources,” Corkhill said.