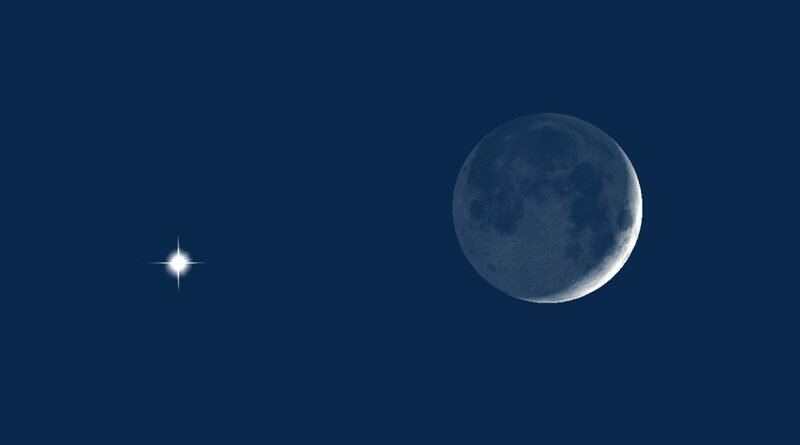 News Science & Nature
July 14, 2018July 16, 2018 Robert Roy Britt
For 15 years, In&Out Magazine has been the definitive source of “Everything that’s going on” in and out of the community. We thank you, our readers, as well as the businesses that support the magazine through advertising, for that opportunity. But with little going on, and many businesses suspending or canceling their ads during the Covid-19 crisis, we are suspending publication of the magazine and web sites for the month of May.

Venus, the “evening star,” is impossible to miss in the western sky lately, shining more brightly than any real star. Sunday evening, July 15, it will snuggle up remarkably close to the crescent moon, making for an easy-to-see sky event—if the weather cooperates.

The two heavenly objects are, of course, separated by millions of miles in space, but they will appear about 1 degree apart in the sky—roughly the width of one finger on an outstretched arm.

You can easily spot the pair as the sun is setting up until the pair themselves set later in the evening. Just find a place with a good view of the western horizon. In fact, if you go out while the sun is still up, and find the moon, then use the finger-on-outstretched-arm measuring device, you might be able to pick out Venus. Then tell your friends you’ve now seen two planets in the daytime with your naked eyes.

(You’re standing on the other one.)

“You won’t want to miss this,” said Diana Hannikainen, observing editor of Sky & Telescope magazine. “These are the two brightest objects in the nighttime sky.”

Also notice that the moon’s lit portion faces the spot where the sun set. That angle explains why only a portion of the moon is brightly lit, from our point of view. Only when the sun and moon are on opposite sides of the Earth does the moon appear full (with one rising as the other sets). 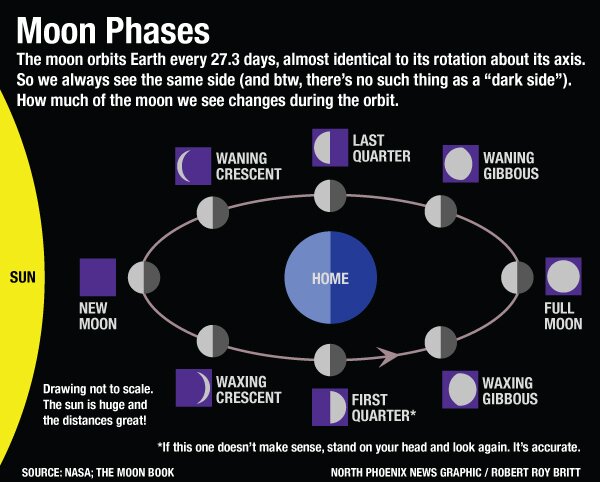 So get this: If you were standing on the moon Sunday night, you’d see a full Earth!

No special equipment is needed, but if you have binoculars or a small telescope, pull them out and see if you can spot some craters on the moon—look for them especially along the line where sunlight and shadow meet.

If your telescope is powerful enough, you’ll see that Venus is football-shaped, Sky & Telescope editors point out. Similar to the moon, it goes through phases. Here’s how it works:

Venus orbits much closer to the sun than does Earth (a year on Venus is just 225 Earth-days). If you looked at it all from above, Venus would be racing around on the inside track, periodically lapping Earth. When Venus is on the far side of sun (but not blocked by the sun) it can be nearly fully illuminated from our vantagepoint. But when it’s “off to the side,” it’s only partly illuminated.

One other cool thing to look for: The shadowed portion of the moon will be dark, of course, but it’ll be visible. Why? Sunlight bounces off Earth and reflects off the shadowed part of the moon and back to us. It’s called earthshine.

There is no permanent “dark side” of the moon. The moon, as it rotates, has days and nights all around. But since the moon’s rotation about its axis almost perfectly matches its orbit around Earth, we see only one side.

There’s actually no such thing as a full moon. When the sun, Earth and moon are in a line, we see what we call a full moon, but it’s actually never 100 percent full. When the alignment is 100 percent perfect, a total lunar eclipse occurs. But since Earth’s orbit around the sun is in a slightly different plane that the moon’s orbit around Earth, that perfect alignment is rare.

The moon is leaving. Our favorite satellite is moving away from us at about 1.5 inches per year. The cause is a complex gravitational interaction that creates tides and which is simultaneously slowing down Earth’s rotation. We happen to live at a moment in the grand scheme of time when total lunar (and solar) eclipses are possible. Eventually, in hundreds of millions of years, the moon will be too far from Earth for total eclipses—and Earth’s day will be about a month long.

Related: Why a Full Moon Looks Huge on the Horizon