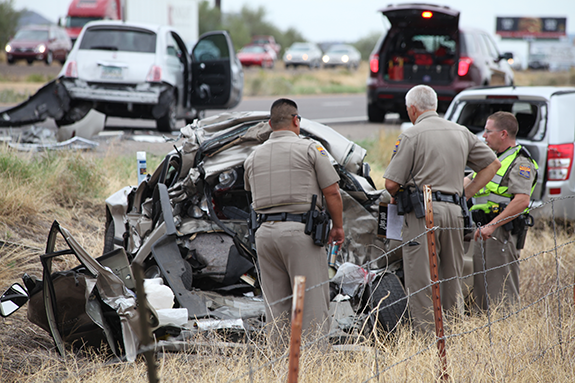 News Traffic & Travel
May 23, 2018May 23, 2018 Robert Roy Britt
For 15 years, In&Out Magazine has been the definitive source of “Everything that’s going on” in and out of the community. We thank you, our readers, as well as the businesses that support the magazine through advertising, for that opportunity. But with little going on, and many businesses suspending or canceling their ads during the Covid-19 crisis, we are suspending publication of the magazine and web sites for the month of May.

So far this year, 136 people have died on Arizona highways, a 24 percent jump compared to this time last year, the Arizona Department of Transportation announced today. And odds are there will be a handful more this weekend. But the agency is putting extra safety measures in place for long weekend and asking drivers to buckle up, slow down and help save lives.

Speed limits will be lowered on I-17 between New River and Sunset Point Rest Area during peak holiday travel periods, as has been done in recent years, ADOT said in a statement today, adding: “State troopers will also focus on preventing three of the leading causes of traffic deaths: speeding, impaired driving and lack of seat belt use.”

The last time there was a fatality-free Memorial Day Weekend on all Arizona roadways—including highways and county and city streets—was 1971. Deaths numbered 11 in 2015, seven in 2016 and five last year.

“We’re moving in the right direction, but too many people are choosing to drive impaired,” said Alberto Gutier, director of the Governor’s Office of Highway Safety. “There are many other ways to get home instead of driving drunk. Plan ahead so you can get home safely. The cost of a cab or rideshare is far less than a DUI.”

Gutier’s office is partnering with law enforcement agencies to enforce Arizona’s seat belt and child safety seat laws, with some officers assigned to specifically finding and fining violators. The campaign will run through June 3.

“This Memorial Day Weekend our troopers will be patrolling throughout the state enforcing speed limits, looking for distracted and aggressive drivers, and targeting impaired drivers,” said Col. Frank Milstead, director of the Arizona Department of Public Safety.

ADOT chooses not to use the word “accident” in describing vehicle crashes, insisting that intentional behaviors are responsible for the vast majority of collisions. “True ‘accidents’ are quite rare,” ADOT Director John Halikowski says.

“Crashes and vehicle fatalities are rising in Arizona and across the country,” Halikowski said today. “We know how to reverse the trend and it begins with drivers. Most drivers are responsible, but a few selfish ones drive drunk or high, drive like a madman or refuse to put down the phone. If you know a driver like that, please talk with them. When everyone begins making safe decisions behind the wheel, these preventable car-crash deaths will end.”

Across all state roadways, 406 people have died so far this year in vehicle collisions (including motorcycles and pedestrians). In a typical year, 66 percent of Arizona vehicle deaths occur city, county and reservation roadways.