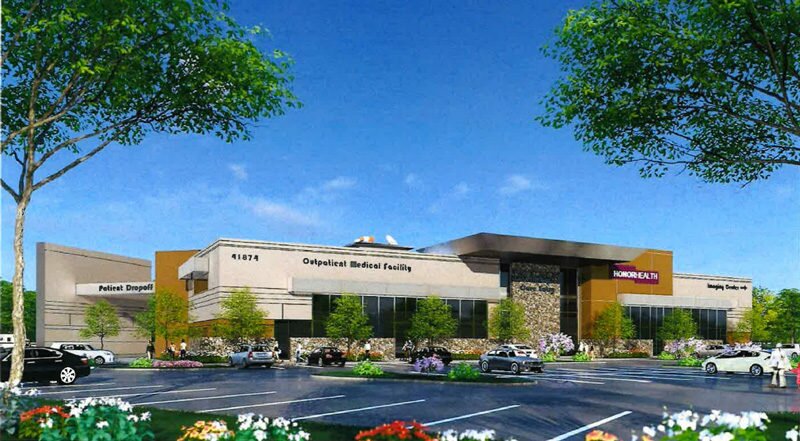 Business Health & Fitness News Real Estate News
April 28, 2017April 28, 2017 Robert Roy Britt anthem
For 15 years, In&Out Magazine has been the definitive source of “Everything that’s going on” in and out of the community. We thank you, our readers, as well as the businesses that support the magazine through advertising, for that opportunity. But with little going on, and many businesses suspending or canceling their ads during the Covid-19 crisis, we are suspending publication of the magazine and web sites for the month of May.

HonorHealth’s construction plans for its Anthem health center were approved unanimously at Anthem Community Council’s monthly meeting April 26 after a staff review of the architecture and aesthetics. The plans still need county approval.

“The project is scheduled to go to the county Board of Supervisors for approval in June, with targeted opening of mid-2018,” HonorHealth spokesperson Jeff Holeman told In&Out today. “We have not set the date for construction yet.”

Council member Rick Kesselman expressed concerns whether bright lights overnight would affect residents in the area. “I would ask you to be very conscious of the residential homes,” Kesselman said.

ACC requested HonorHealth submit further specifics on lighted signage, which will be subject to separate approval.

The facility, already approved in concept by the ACC, will be constructed on vacant land along Venture Drive south of the Anthem Civic Building. As previously reported, the outpatient medical facility will offer services ranging from MRIs and CT scans to sports medicine and possibly sleep therapy, as well as outpatient care for immediate, non-emergency situations.

New renderings show the building at 40 feet in height. A helipad on the roof will be used for emergency evacuations only. The ACC approved the helipad on the condition it not be used to bring patients to the facility. HonorHealth officials have said it would be used only in extremely rare situations.

The center will not be a hospital nor an emergency facility, according to HonorHealth officials. That role is filled by the company’s Sonoran Health and Emergency Center on Dove Valley Road, just off I-17. In December, HonorHealth announced plans to build an even larger medical complex next to that hospital, along with retail buildings and a hotel, on recently acquired land.