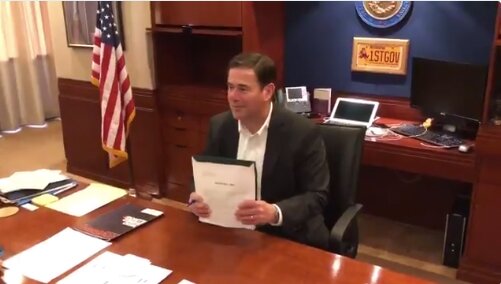 News Schools
May 3, 2018May 3, 2018 Robert Roy Britt dvusd
For 15 years, In&Out Magazine has been the definitive source of “Everything that’s going on” in and out of the community. We thank you, our readers, as well as the businesses that support the magazine through advertising, for that opportunity. But with little going on, and many businesses suspending or canceling their ads during the Covid-19 crisis, we are suspending publication of the magazine and web sites for the month of May.

UPDATED 12:46 p.m. — After a weeks-long saga of walk-ins and walkouts and at times acrimonious accusations between educators and lawmakers, Gov. Doug Ducey signed legislation this morning to increase teacher salaries and other education funding, and leaders of the #RedForEd movement said they’ll return to class Friday.

The district has said that if the walkout lasted more than four days, which it has, that school would likely be extended beyond Memorial Day. State law requires a certain number of instructional days or hours to be achieved.

The education funding bill’s passage comes on the sixth day of a statewide walkout and the fifth day of missed school at Deer Valley Unified School District, leaving parents concerned about how makeup days will be handled.

This raise is earned, and it is deserved. Everyone can name the teachers who made a positive impact on their lives. For me, it was Mr. Zammit, Mr. Wagner, Doc Demar, Professor Olney, Sister Patrice. Teaching is more than a job — it’s a noble public service! #20×2020

House Bill 2663 calls for a 9 percent raise in the coming school year (in addition to a 1 percent raise already enacted) and 5 percent raises in each of the next two years. It also restores some of the funds cut from education since 2008, including money that districts can spend as they see best on such things as support staff salaries, textbooks, technology, equipment and infrastructure.

“Arizona teachers have earned a raise, and this plan delivers,” Ducey said in a statement. “The impact our teachers have on the lives of Arizona kids cannot be overstated. They work incredibly hard to make a difference for their students.” The statement added: “This budget was very much influenced and shaped by Arizona school leaders.”

After an overnight legislative session to get HB 2663 on the governor’s desk, several other bills related to the state budget remain to be finalized.

Shortly after noon, #RedForEd leaders announced the walkout was over.

“We will return to our schools, classrooms, and students knowing that we have achieved something truly historic,” the AEA said in a statement at 12:38 p.M. “We should take pride in what we have accomplished, and in the movement that we have created together.”

But the group made clear it is not satisfied:

“The #RedforEd fight continues,” AEA said. “And since lawmakers aren’t getting the job done, we will. Today, we will rally at the Capitol. And over the next few days we will provide additional details about next steps.”

AEU organizer Noah Karvelis spoke to supporters outside the Capitol mid-morning, saying one next step is for #RedForEd supporters to organize their voting efforts around getting education-friendly politicians elected to the statehouse in November.

“The change happens with us,” Karvelis said. “The fight happens with us. The passion, the power is with us. And now we continue. We go to the ballot. We get it done there. We restore our funding. And we fight for our kids.”

He added in a tweet this afternoon: “I can’t wait to go back to school and see my kids tomorrow.”

Around midnight, Kelley Wendland Fisher, a leader within AEU, said all the amendments to the bill sought by #RedForEd leaders had failed. Educators had sought, among other things, to cap class sizes at 25 students and to cap the student-to-counselor ratio at 250:1. Fisher said that legislators who planned to vote no on the bill were doing so because they did not believe it does enough for education.

Highlights of the Legislation

“The budget does not compromise other essential state services to accommodate our teacher pay package,” the governor’s statement said. “In fact, it increases the state’s commitments to developmental disabilities, skilled nursing facilities, Medicaid, critical access hospitals, the arts, food banks and higher education.”

A host of other line items in the bill add funding to activities tangential to or unrelated to education, ranging from $10.7 million for a developmentally disabled program to $24 million to build a new National Guard Readiness Center in Tucson. [Full Details of the Bill]

Editor’s Note: See yesterday’s story for the latest information on DVUSD’s plans, which could include extending school beyond Memorial Day. North Phoenix News will continue coverage as we get reaction from #RedForEd leaders, their plans for next steps, and when DVUSD announces when school will reopen and how the makeup days will be handled.

Educators in the #RedForEd movement fought for more than the governor was originally willing to offer, and they have said in recent days that this bill’s passage would not mean the end of their longer-term efforts to increase school funding. Among their reasons:

“This is a real win for our teachers, for our kids,” the governor said as he signed the bill, characterizing it as a bipartisan effort.