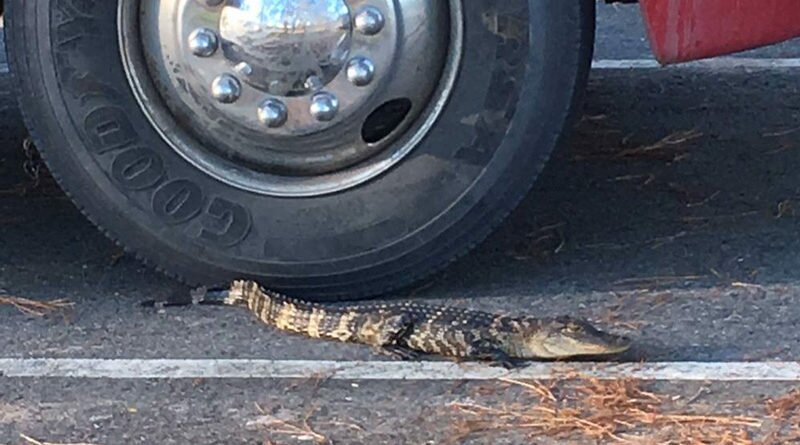 Alligators are not high on the list of hazards Daisy Mountain firefighters expect to face, but that’s exactly what a crew ran into while battling one of many wildfires this season. Of course, they had to go to Georgia to avoid running over one of those Cretaceous creatures.

Daisy Mountain Fire Department (DMFD) responds to about 3,500 calls a year, said DMFD Battalion Chief Dave Wilson. Some 85 percent of them are medical emergencies. The remaining 15 percent are rescues, snake removals, hazardous materials calls and fires. And the fires can be almost anywhere.

DMFD has dealt with nearly two dozen wildfires already this year in the I-17 corridor between North Phoenix and the area around Black Canyon City. Locally, it’s been the most active season in two decades. But the department also assists with wildfires around the state — a half-dozen so far this year — and sometimes beyond.

This week, DMFD sent an ambulance, a medic and an EMT to the Lizard Fire, which has scorched more than 15,000 acres in southeast Arizona. Last week an engine and crew were dispatched to the Bowie Fire in the same region. And last month, a DMFD water tanker with crew motored all the way to Georgia, to help fight the West Mims Fire, which burned more than 150,000 acres.

It’s all part of a cooperative effort at the state and national level to put resources where they’re needed, when they’re needed.

Like many fire districts, DMFD has a contract with the State of Arizona to provide crews and equipment that the state, on its own, simply does not have, Wilson explained. The state reimburses DMFD for these expeditions, including those out of state.

The agreement not only covers costs but also generates revenue for the district, Wilson told In&Out. “Furthermore, crews gain valuable experience that enhances the services that we can provide to our citizens locally.”

On the Home Front

Closer to home, DMFD is one of about 30 valley fire departments that cooperate to respond to emergencies wherever they occur, through an “automatic aid agreement,” Wilson explained. That ensures “there will always be a unit available to respond to an emergency even if all DMFD units are assigned to an incident or multiple incidents simultaneously.”

Wilson stressed that DMFD “does not release units for out-of-district responses without making sure our community is covered first.”

Wildland firefighting is no picnic, of course. Teams dispatched to a big, faraway fire work 16-hour days for 14 days, plus a travel day on each end.

“The crews adhere to strict work/rest cycles and are monitored closely to ensure that they are safe,” Wilson said. “Needless to say, yes, the work can be very tiring. However, the crews are put through a rigorous physical testing process prior to deploying to ensure that they all qualify for such physically taxing work.”

That training does not, however, include how to deal with alligators.