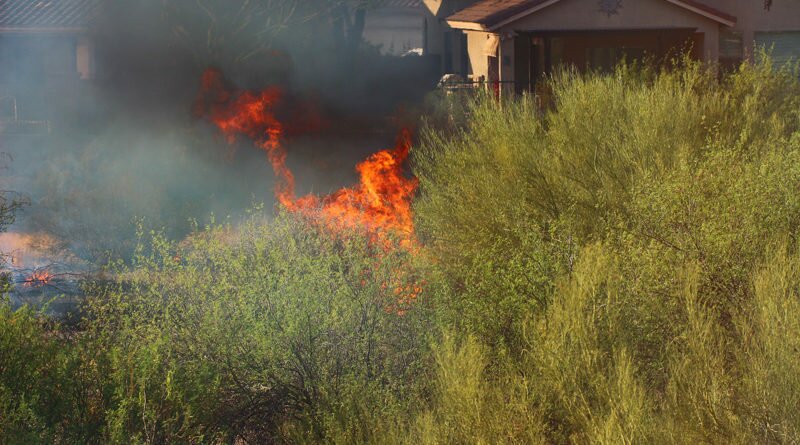 Community Featured News
June 13, 2018June 13, 2018 Robert Roy Britt wildfires
For 15 years, In&Out Magazine has been the definitive source of “Everything that’s going on” in and out of the community. We thank you, our readers, as well as the businesses that support the magazine through advertising, for that opportunity. But with little going on, and many businesses suspending or canceling their ads during the Covid-19 crisis, we are suspending publication of the magazine and web sites for the month of May.

Extreme drought, seasonally dry brush and dead material that hasn’t been cleared in decades, have local and state officials worried about fire risk in the I-17 corridor from Norterra through Sonoran Foothills, Tramonto, Anthem and northward to Black Canyon City. But for suburban homeowners, the advice to “clear a 30-foot defensible space” ranges from impossible to extremely complicated. The challenge, somewhat ironically, traces back to efforts to protect the nation’s water.

Section 404 of the 1972 Federal Clean Water act limits activity in any U.S. waterway, including intermittent streams—like the mostly dry washes of Arizona. The law requires a permit from the Army Corps of Engineers before anything can be added to (or dumped in) a 404-defined area.

The law does not explicitly prevent removing brush or debris, explained Karl Gehrke, a planning specialist with the Arizona Department of Forestry and Fire Management. That allows leeway for his agency and others to perform sensible fire prevention, but guidelines vary by jurisdiction.

The I-17 corridor from North Phoenix into the mountains is being targeted for fire prevention by state officials, Gehrke said, because “we pop a lot of fires there.” Brush fires in the region are almost always human-caused—with driving in tall grass, discarding cigarettes, dragging chains and target shooting, among the prime culprits. But abundant dry vegetation plays a role, especially in the often rapid spread of fires.

One year ago, on June 22, the 303 Fire scorched 1,676 acres—2.6  square miles—in just an afternoon along the west side of I-17 between the Loop 303 and Carefree Highway. The wind-whipped blaze might have been much larger without the roadways acting as barriers, fire officials said.

“Many of the washes [in the I-17 corridor] have been untouched for 30 years,” Gehrke told In&Out.

The forestry department has new funds from the latest state budget for fire prevention, and plans to clear brush on ADOT rights-of-way and adjacent State Trust Land all along the I-17 corridor, Gehrke said. The work can’t start until winter, though, because current fire restrictions prevent the use of chainsaws and other equipment needed to do the clearing.

Meanwhile, ADOT mows the I-17 median and shoulders from south of Carefree Highway to New River Road in summer and again in winter “to help control potential fuel for fires,” said agency spokesperson Doug Nintzel. “Precautions are taken when that work is taking place,” he said. “We have a water truck in the work area in case something might be sparked.”

Many homes in North Phoenix, from the Norterra area to Tramonto, back up to the city’s preserve. Those residents “may remove dry shrubs, brush and grasses, and trim dead branches from trees within the 10-foot strip of preserve bordering their property,” the city said in a statement earlier this year announcing the annual ban on smoking and all fires within city preserves.

For more information about removing vegetation within the preserve, call 602-495-5458 or e-mail [email protected]

The May 29 Anthem fire was contained on one side by a concrete path in the center of the wash. Its cause was not determined, fire officials said. Video by Anthem resident Evan Baltz

Anthem’s 404 washes, which wind throughout the community, are governed more strictly by restrictive covenants administered typically by the Anthem Community Council with Army Corps enforcement oversight.

“Any unauthorized landscaping or maintenance [in] the washes is illegal,” according to a document on the ACC website.

BrightView, the landscape firm contracted by ACC, periodically clears a 3-foot-wide zone behind walls and view fences, as well as along trails, according to Community Executive Officer Neal Shearer. The landscaper clears more than 5 linear miles of brush each year, Shearer said. But given the extreme fire risk this year, the effort is being stepped up.

“We’re working with BrightView to bring in additional crews to expedite brush clearance in June, and we also plan to widen the clearance zone,” Shearer said.

Anthem Parkside residents concerned about brush encroaching on their property can call the Parks & Facilities Department at 623-879-3028. “The staff will determine if the vegetation is causing a safety hazard before determining if maintenance can/will be done,” said ACC spokesperson Kristi Northcutt. Country Club homeowners can file a Desert Maintenance Request with the HOA, she said.

What if your neighbor isn’t fire-wise, or if you live next to undeveloped private acreage that’s overgrown?

“The sole responsibility for private property falls on the shoulders of the property owner,” said Daisy Mountain Fire spokesperson Brent Fenton. “A neighbor can request that the owner clear their property, however the property owner is under no obligation.”

If you aren’t sure who controls the property behind you, ask your HOA, city or county officials before taking action.

When All Bets Are Off

Once a fire starts, the rules protecting open space and washes mostly go out the window. “We have the responsibility to extinguish any fire that occurs within the Daisy Mountain Fire District, by any means necessary,” Fenton said.

Daisy Mountain Fire responded to 47 brush fires last year. This year, the agency has tackled 29 so far. One year ago, less than 1 percent of the state was then in severe drought. Today, the figure is 97 percent. Since October, North Phoenix has gotten about 14 percent of normal rainfall.