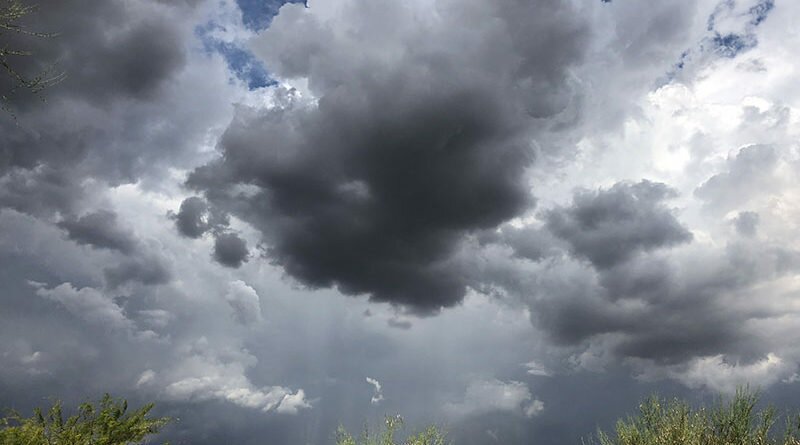 Desert Living News Science & Nature
July 27, 2018 Robert Roy Britt
For 15 years, In&Out Magazine has been the definitive source of “Everything that’s going on” in and out of the community. We thank you, our readers, as well as the businesses that support the magazine through advertising, for that opportunity. But with little going on, and many businesses suspending or canceling their ads during the Covid-19 crisis, we are suspending publication of the magazine and web sites for the month of May.

Monsoon whether is weird. Weather forecasting can be a little strange, too. Based on some reader questions, we reached out to Andrew Deemer, a meteorologist at the National Weather Service office in Phoenix, to explore some finer points of monsoon meteorology.

AD “This is a tough one and I am not sure anyone can really give a solid answer,” Deemer said. The official NWS definition says it’s “the chance of precipitation occurring at any point” in the forecast area. But Deemer thinks of it this way: If there’s a 20 percent chance of rain, he’d like to see 20 percent of the forecast area getting at least a trace of rain.

Is a 20 percent chance of rain really significant?

“As someone who grew up here, I have attached much more significance to hearing 30 percent (or greater) chance for rain, and I tend to dismiss anything less. But that’s just a personal bias.”

Why do temperatures drop during the monsoon?

“It takes much more energy to raise the temperature of a liquid than dry air,” Deemer explained. Just think of how quickly the air warms up on a sunny day in May, while a pool takes several days or weeks to warm up. When the air is dry in spring and early summer, temperatures soar. When monsoon moisture moves in, temperatures simply can’t climb as high.

Why does it get downright cool when a thunderstorm rolls through?

The amount of moisture in the air relative to the temperature is called relative humidity (think of it as relative stickiness). In a thunderstorm, some of the rain evaporates as it falls. Like an evaporative cooler, this cools the air, causing the relative humidity to rise.

All About the Monsoon Learn where the name came from, what causes a haboob, and why forecasting monsoon storms is so difficult.