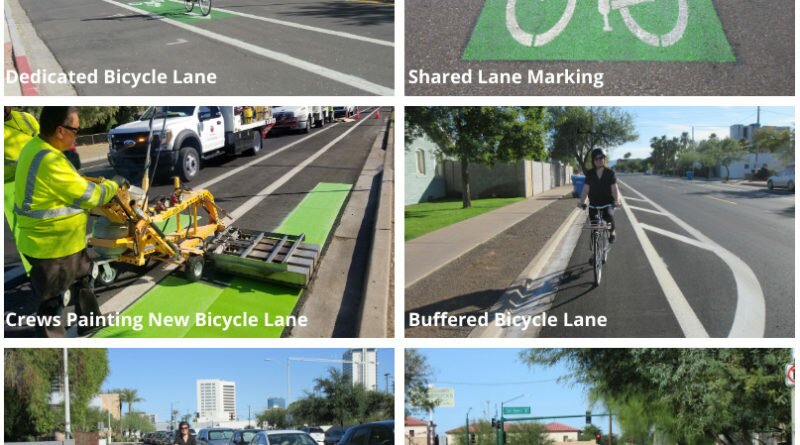 Press Releases
December 12, 2019December 12, 2019 PRESS RELEASE
For 15 years, In&Out Magazine has been the definitive source of “Everything that’s going on” in and out of the community. We thank you, our readers, as well as the businesses that support the magazine through advertising, for that opportunity. But with little going on, and many businesses suspending or canceling their ads during the Covid-19 crisis, we are suspending publication of the magazine and web sites for the month of May.

CITY OF PHOENIX — The city of Phoenix is prioritizing multimodal and active transportation by upgrading bicycle infrastructure throughout the city. Upgrades include bicycle lanes and shared lane markings, bicycle protection and signage. These upgrades, accompanied by the addition of a full-time Active Transportation Program Manager position in the Street Transportation Department, will improve safety for all users of the roadways.

“Phoenix is the nation’s fifth largest city and, as the population continues to grow, our transportation options must reflect the diverse needs of our residents,” said Mayor Kate Gallego. “Upgrading our bicycle infrastructure to include more lanes, more protection, and better signage, helps encourage multimodal transportation, particularly in our city core.” 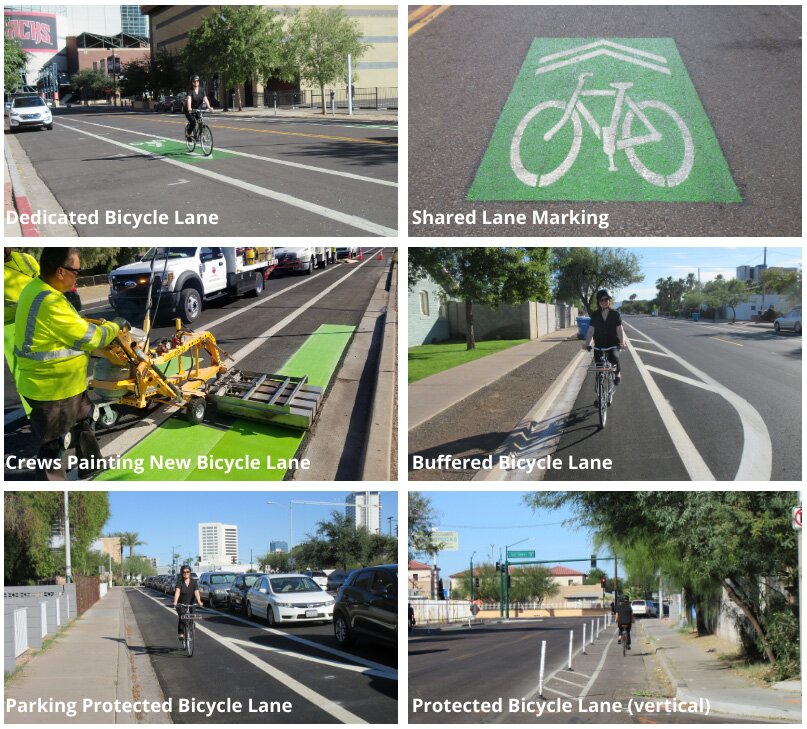 People who drive cars, ride bicycles or walk in the city of Phoenix may have noticed new bicycle infrastructure on the streets.

“Phoenix residents travel our streets using different modes of transportation and we’re working hard to make important safety improvements. Thanks to the voter-approved Transportation 2050 plan, our bicycle lanes, markings, signage and other protective measures will assist cyclists as we all share the road,” said Councilwoman Thelda Williams, Chair, Transportation Infrastructure and Innovation Subcommittee.

In the first three and a half years of the voter-approved Transportation 2050 (T2050) plan, more than 157 miles of new dedicated bicycle lanes have been added to the city’s bicycle network. Additionally, in 2019, nearly 300 shared lane markings were installed in downtown Phoenix. Dedicated bicycle lanes are travel lanes exclusively for people riding bicycles. Shared lane markings visually reinforce to motorists that people on bicycles have the legal right to occupy the same space on the road as people driving cars.

The city also added 12 miles of buffered bicycle lanes in 2019 and is planning to install an additional 34 miles by 2023. The buffer (painted stripes) creates additional space between vehicles and people walking or bicycling, enhancing safety.

Many of these bicycle and shared lane markings are backed with green paint. The vibrant color helps draw attention to people bicycling and reminds people driving to be aware of people riding bicycles.

The city is also identifying opportunities to add protection to existing bicycle lanes. Protection can come in the form of a parked car or vertical delineator to separate bicycle and vehicle traffic.

In October, the city of Phoenix installed its first parking protected bicycle lanes on 39th Avenue from Encanto Boulevard to Edgemont Avenue and Earll Drive from Sixth to Third Avenues. This configuration switches the traditional placement of a parking lane and bicycle lane. The resulting roadway places the bicycle lane next to the curb and farthest away from vehicle traffic. The parked cars form a barrier protecting people riding bicycles from moving vehicle traffic.

Councilwoman Laura Pastor, the councilmember for District 4 (where both protected bicycle lanes reside), explained that this new addition to the city’s streetscape “improves safety for our bicyclists and pedestrians, and helps to ensure we can all share the road safety.” She added, “the city will continue to look at ways to improve our roads for everyone who wants to bike or walk, because that’s what makes central Phoenix such a wonderful, vibrant community. The addition of protected bicycle infrastructure in Phoenix is the next step in our journey to a safer, stronger city.”

Bicycle protection comes in other forms such as vertical markers like plastic posts or small bumps. In 2020, the city will host several public meetings focusing on identifying the best locations for adding protection to existing bicycle lanes. These meetings will be publicized at phoenix.gov/streets.

The city is also installing more signs that are used to remind motorists to share the road and to give people on bicycles ample room when passing. In addition to standard signage, the city partnered with the Rob Dollar Foundation to add new signs at several strategic locations throughout Phoenix. The Federal Highway Administration, which establishes and approves road sign standards, granted Phoenix special permission to test and evaluate the use of these new signs. The signs remind drivers that state law requires a minimum of three feet to pass bicycles. 16 of these special signs were recently installed and an additional four are planned to be installed. The signs will be evaluated before potential incorporation citywide.

These safety improvements are part of a larger vision for active transportation within the Street Transportation Department. The department recently added to its staff an Active Transportation Program Manager, Marielle Brown. Marielle will oversee the implementation of a robust active transportation program, including an update to the city’s Bicycle Master Plan. The current plan was adopted in 2014, and its update is estimated for completion in fall 2021.