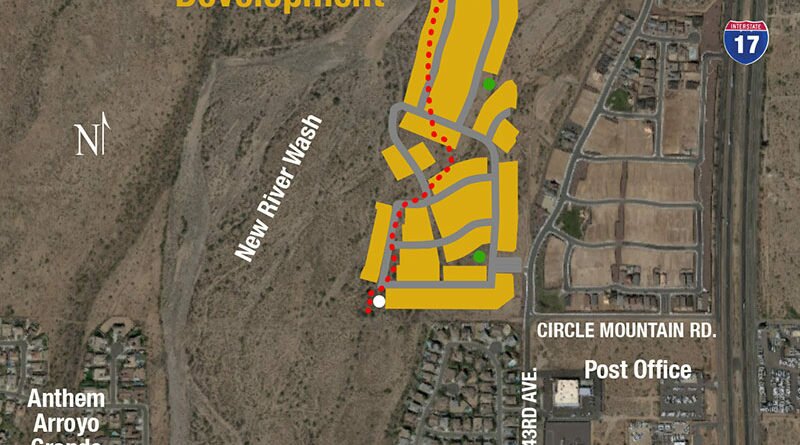 News Real Estate News
September 12, 2019 Staff Writers
For 15 years, In&Out Magazine has been the definitive source of “Everything that’s going on” in and out of the community. We thank you, our readers, as well as the businesses that support the magazine through advertising, for that opportunity. But with little going on, and many businesses suspending or canceling their ads during the Covid-19 crisis, we are suspending publication of the magazine and web sites for the month of May.

A project to build 170 homes on 55 private acres adjacent to Anthem, northwest of the Post Office, got the green light last week when Phoenix City Council unanimously approved a developer’s rezoning request.

The property will change from S-1 (ranch or farm residence) to R1-6 (single-family residential). The project, called Riverview, will be developed by Scottsdale-based El Dorado Holdings.

The approval came despite objections from nearby residents based on existing traffic congestion on 43rd Avenue—the only way in and out of Riverview and some Anthem neighborhoods, including Circle Mountain—and general safety concerns should an emergency require evacuations.

Riverview will not be part of Anthem, so its residents won’t have access to the community center and technically cannot use Anthem’s parks, which are maintained through Anthem residents’ dues.  Anthem Community Council opposed the project based on the assumption that Riverview residents will use the parks anyway. ACC officials also echoed the traffic and safety concerns.

Homes will range from 2,400 to 4,000 square feet with starting prices from $325,000 to $550,000, according to the developer. Homes on the south edge of the project, bordering Anthem’s Ridge neighborhood, will be limited to single-story.

No date has been set for construction to start, but the city stipulated that no site development can begin for at least six months.