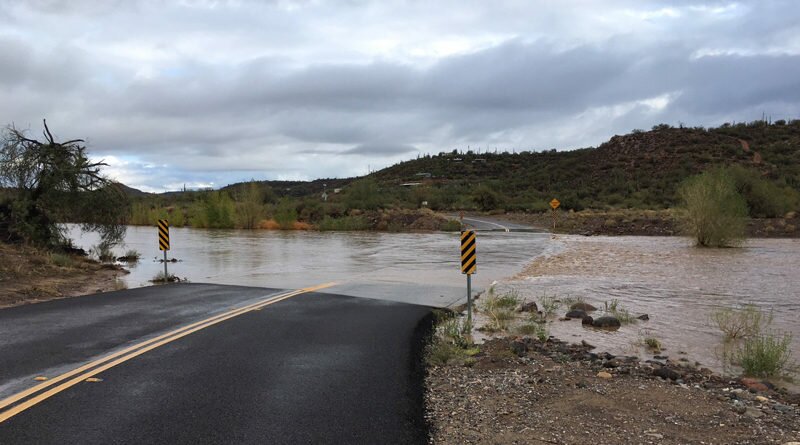 Featured News Science & Nature
October 3, 2018October 3, 2018 Robert Roy Britt rosa, weather
For 15 years, In&Out Magazine has been the definitive source of “Everything that’s going on” in and out of the community. We thank you, our readers, as well as the businesses that support the magazine through advertising, for that opportunity. But with little going on, and many businesses suspending or canceling their ads during the Covid-19 crisis, we are suspending publication of the magazine and web sites for the month of May.

At one time a Category 4 hurricane in the Pacific, with top winds near 145 mph, Rosa’s comparatively calm but persistent remnants dumped 3 inches of rain in New River and near the Arroyo Grande neighborhood on the far west side of Anthem. The storm smashed a daily rainfall record in Phoenix, with 2.36 inches falling at Sky Harbor Airport on Oct. 2—the previous record for that date was 0.60 inches in 1981.

Given those statistics, we’ve added Rosa to our list of Top 10 Hurricanes That Have Affected Phoenix. Below are are some key facts and figures and some memorable photos and videos. First the totals:

How Much Is That?

In an average year, Deer Valley Airport gets 10.76 inches of rain, with 0.76 inches of it typically falling in October. Anthem and New River, being near the mountains, tend to get more (Deer Valley Airport is at 1,478 feet of elevation; Anthem ranges from 1,760 to 2,428 feet). But because the history at these stations doesn’t go back very many years, the National Weather Service does not announce records for the area.

So here’s how the storm shook out at Sky Harbor Airport, the Valley’s official recording station:

Other big numbers: A whopping 7.24 inches landed in an official rain gauge near Crown King, northeast of Phoenix. Two gauges south of Shea Boulevard between Tatum Boulevard and Scottsdale Road each recorded 4.02 inches.

Note: All our previous stories about Rosa are here.

Rosa’s impact was related in large part to its duration.

This radar loop shows Rosa’s moisture streaming into Arizona from 8 a.m. Sunday, Sept. 30 through 2 p.m. Tuesday, Oct. 2 (Phoenix is near the center of the image):

How important was Rosa to our annual rainfall accumulation? Sky Harbor typically gets about 8.3 inches of rain a year, with a good chunk of that coming during monsoon. As of 4 p.m. Tuesday, Oct. 2 at Sky Harbor:

So…Rosa brought as much rain to #Phoenix the last three days as #Phoenix mostly saw for the monsoon. We will likely see the Rosa total rise WOW! #azwx pic.twitter.com/FJ4p6kTvan

Check out one of the most intense rainbows we've ever seen above Phoenix, AZ #azwx Photo: @geraldferguson pic.twitter.com/9cRNlOGNTf