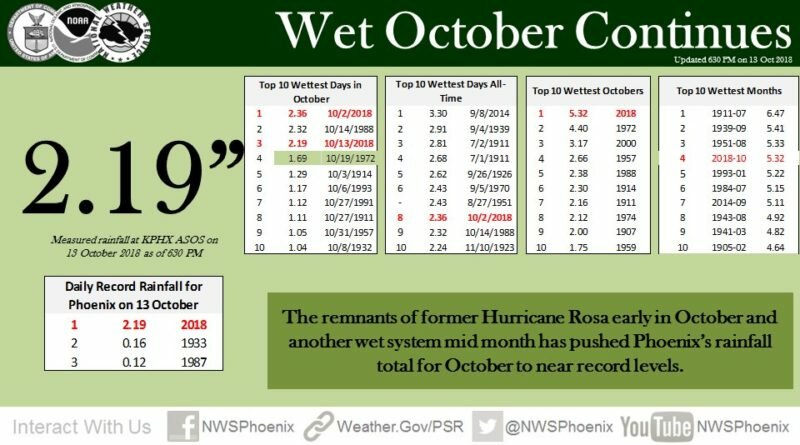 News Science & Nature
October 14, 2018October 17, 2018 Robert Roy Britt weather
For 15 years, In&Out Magazine has been the definitive source of “Everything that’s going on” in and out of the community. We thank you, our readers, as well as the businesses that support the magazine through advertising, for that opportunity. But with little going on, and many businesses suspending or canceling their ads during the Covid-19 crisis, we are suspending publication of the magazine and web sites for the month of May.

Another cool day today but MUCH less shower activity than yesterday. A system from the north brings drier air and strong winds tonight and Monday – mainly for southeast CA and western AZ. #azwx #cawx pic.twitter.com/ujlnopASBv

UPDATED 8:20 a.m. Sunday, Oct. 14 — On Friday, the National Weather Service predicted a few tenths of an inch of rain for the Phoenix Metro Area over the weekend. By 6:52 p.m. Saturday, Sky Harbor Airport had recorded 2.19 inches, adding to Rosa’s rains earlier in the month to make this October the wettest ever for the city, at 5.32 inches so far. It’s also the 4th wettest month ever, period.

Meanwhile, more than 2 inches had fallen in several areas of the Valley, with 3-plus inches recorded at South Mountain and another gauge in Estrella Village. North Phoenix got notably, less — under an inch — but still significant amounts. [See local totals below.]

What happened? A storm system moving in from the Pacific and across California interacted with moisture left behind by the remnants of Hurricane Sergio, to create a system that was “a bit more dynamic as it came through,” than was expected, said Paul Iniguez, meteorologist with the National Weather Service office in Phoenix.

Sergio’s disorganized remnants were long gone before Saturday’s heavy rains came. “What [Sergio] did do is help put some moisture in place,” Iniguez told North Phoenix News. Then a couple of “waves” in the atmosphere interacted to usher in the significant downpours.

Among the local rainfall totals for this storm, as of 8:20 a.m. Sunday:

At Sky Harbor, the total rain for the calendar year so far is 8.72 inches, or 2.55 inches above normal, the NWS said. Already last week, officials said the state’s long-term drought had eased notably.

Sunday’s forecast calls for isolated showers and thunderstorms in the morning, then partly sunny by afternoon with a high near 75.

Several roads and freeways in the Valley flooded Saturday, with some closures. At about 1:30 p.m., ADOT reported “Multiple crashes at various locations along on Interstate 17,” noting at least six separate crashes between New River and Flagstaff. The crashes had been cleared by mid-afternoon Saturday.

Streets are closed due to flooding near 17th Ave & Grand along with some of the neighborhood streets of Culver & Willetta in the same area. Police are trying to block traffic but some drivers are continuing through the flooded streets. #Fox10phoenix pic.twitter.com/SB8PPmVaJT

After all of this rain across #Phoenix, parts of the West Valley are seeing fog this morning, including patchy dense fog at times. Please slow down on the Loop 101 and 10 and use your low beam headlights in these areas! #azwx pic.twitter.com/ftT01dZpw2

Watch for fog along highways. You can see it's misty along I-17 just south of Flagstaff. pic.twitter.com/svLgethveb