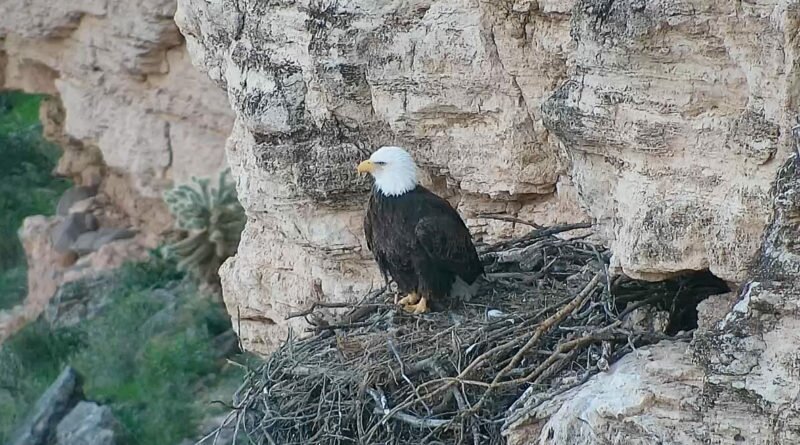 News Science & Nature
January 23, 2019 Staff Writers
For 15 years, In&Out Magazine has been the definitive source of “Everything that’s going on” in and out of the community. We thank you, our readers, as well as the businesses that support the magazine through advertising, for that opportunity. But with little going on, and many businesses suspending or canceling their ads during the Covid-19 crisis, we are suspending publication of the magazine and web sites for the month of May.

A pair of bald eagles unwittingly starring in a live reality show at Lake Pleasant have done their duty.

“We officially have an eagle egg!” Arizona Fish & Game announced yesterday. “After weeks of prep, the big moment happened” the day prior (Monday, Jan. 21). “Mom & Dad are a new breeding pair, so we have to be cautiously optimistic about the future family, but it’s an exciting step,” the agency said.

The video feed is here (and yes, it’s live).

Records show bald eagles have inhabited Lake Pleasant since at least 1979, with the first documented nesting attempt occurring in 1984. While no young were produced until 1993, 28 birds have since survived to take their first flight, known as fledging.

Arizona’s bald eagle population continues to soar as the number of breeding areas expanded statewide and a record 87 young hatched during the 2018 breeding season, according the Arizona Game and Fish Department’s annual survey announced in November.

The camera feed was made possible through permitting and coordination with Arizona State Land Department, the U.S. Bureau of Reclamation, Maricopa County Parks and Recreation, and Salt River Project.