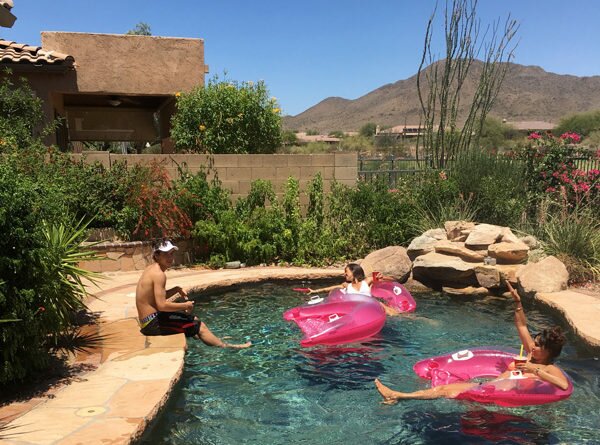 Desert Living
March 28, 2017January 24, 2018 Nadine Shaalan how to, reference
For 15 years, In&Out Magazine has been the definitive source of “Everything that’s going on” in and out of the community. We thank you, our readers, as well as the businesses that support the magazine through advertising, for that opportunity. But with little going on, and many businesses suspending or canceling their ads during the Covid-19 crisis, we are suspending publication of the magazine and web sites for the month of May.

If you find it’s really tough to keep the chlorine stable in your pool, and the water hasn’t been drained in five or six years, the problem could be the water is “stale.”

When water evaporates over a long period, the remaining water can reach a higher concentration of total dissolved solids and more calcium hardness, according to Sean Webster of Advent Pools. The result is hard-to-balance water and that dreaded white ring around the water line.

The problem is common throughout North Phoenix, and seems to happen even more frequently in Anthem, Webster said. There’s really no cure except to refresh your water, he said, either by backwashing (which will dilute some of the mineral counts) or fully emptying and refilling your pool. You can delay the inevitable by diligently balancing your water and avoiding using shock.

Check the thermometer. Webster warns against emptying the pool during summer: Don’t empty a plaster pool if it’s 90 degrees or higher or a pebble tec pool if it’s hotter than 95 degrees―the heat could cause cracking.

While you’re at it, have that white line sandblasted. “It’s actually silicone, and it’s harder than the calcium deposit so it knocks it right off,” Webster said. Sandblasting costs about $3 per linear foot.

The Right Way to Drain a Pool

Draining your chemically treated pool or spa water into the street or the wash is irresponsible and prohibited. In Phoenix, doing so is a class 1 misdemeanor and may result in a fine of up to $2,500. If you have a small amount of water to drain, consider using it to irrigate Bermuda grass or other salt-tolerant plants.

If you have to empty the pool (or have recently irrigated your landscape using pool water), use your home’s sewer clean-out. But you need to know when to drain a pool, as well as how:

How Long Will it Take?

A 10,000-gallon pool (a modest size) will take about 14 hours to drain at 720 gallons per hour (12 gallons per minute), the maximum rate recommended by the City of Phoenix. Double the pool size (or cut the pump rate in half) and it’ll take twice as long to drain.

Nadine Shaalan
A Detroit native, Shaalan landed in North Phoenix by way of Philadelphia, Chestertown, Cairo, and New York City. In 2005, she founded In&Out Publications, the parent of North Phoenix News. Before that she was a designer with the Philadelphia Inquirer, and previously co-founded a book-publishing company in Egypt.